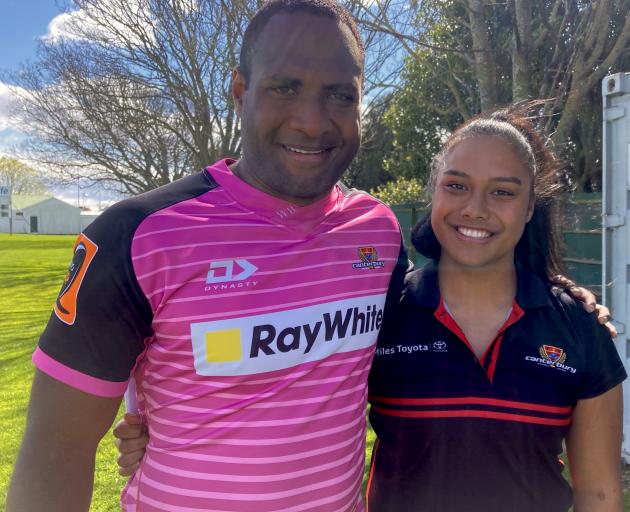 Establishing a base with partner and fellow Canterbury rugby representative, Martha Lolohea, led to Manasa Mataele switching his Mitre 10 Cup allegiance from Taranaki.
Manasa Mataele is relishing taking on a leadership role in his debut season for Canterbury after his latest injury setback proved a learning experience.

Although just 23, the softly-spoken Fijian-born wing is already an integral cog in Canterbury’s Mitre 10 Cup squad, particularly as the province’s frontline All Blacks will soon divert to international duties.

Brayden Ennor’s season-ending knee injury in the North-South clash means Canterbury’s backline was already missing vital experience, even before Richie Mo’unga and George Bridge link up with the All Blacks squad.

When that duo depart, halfback Mitchell Drummond is the only back with extensive Super Rugby and provincial experience.

“They (Canterbury) have put me in the position for me to grow as a leader, a role to lead from the front," he said.

Mataele is acutely aware of what Ennor faces after suffering his own long-term knee injury when he was arguably the form wing in last year’s Super Rugby tournament.

Ironically his setback set the scene for fellow Fijian Sevu Reece to excel for the Crusaders and ultimately make the Rugby World Cup squad in Japan.

Mataele dealt with the disappointment by embracing rehab and striving to mature off the field.

“Being out builds character as well,” he explained.

“I was lucky to have good people around me with their positive words.”

Mataele’s partner, Canterbury women’s representative Martha Lolohea, was at the forefront of his support network and a key factor behind his decision to switch to Canterbury after four seasons with Taranaki, who strive to end Canterbury’s Ranfurly Shield reign at Orangetheory Stadium on Saturday.

"(Martha) made it really easy for me being down here.

"Having that support was key for me, especially when I was out of rugby … it gave me a lot of confidence knowing that someone cares for me.”

"It was a hard decision because they (Taranaki) brought me out from Fiji and gave me an opportunity but we chose Canterbury so we could stay in one place rather than moving up and down looking for houses every three months after Mitre 10.”

Mataele was limited to only two Super Rugby appearances - against the Sunwolves and Reds - as the All Black-laden Crusaders back three stayed intact.

“Even though I didn’t have much of a run in Super Rugby, I now have an opportunity (to teach) the up and coming players,” he said.

He debuted for Canterbury in the Ranfurly Shield romp over North Otago, then played the final pre-season hit out against Tasman and last Friday’s campaign-opening win over North Harbour.

And while he’s rapt to be logging plenty of game time, Mataele said his rehabilitation programme was beneficial - and not just for the knee.

"One of my main focuses was to grow, not just as a rugby player, but also to be a better person off the field,” he said.

So Mataele helped out with sport and games at Opawa School, where Lolohea is on the teaching staff, and he also learned from former Crusaders like Tim Bateman on how to negotiate setbacks.

Matalele was on a wing that night and completed the comeback when he leapt to grab a Richie Mo’unga chip before haring off to score.

“There’s been a bit of banter with Richie," he smiled.

"It’s always good fun being around him."