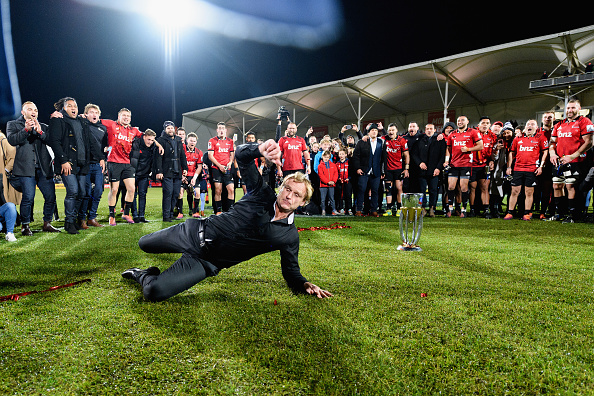 While the past three seasons of Super Rugby saw the 45-year-old bust a move, when the Crusaders clinched the Super Rugby Aotearoa title on Sunday with a 32-22 win over the Highlanders, Robertson stayed on his feet.

Unlike the original Super Rugby season, the New Zealand-only incarnation is a round-robin only competition. So while the Crusaders claimed the title on Sunday, they have to run back out next weekend for their final game of the season against the Blues at Eden Park in Auckland.

Speaking after the win over the Highlanders, Robertson explained the competition not yet being over was one of the reasons he chose not to dance in celebration.

"I didn't do any back-spinning at this stage because we've still got a job to do. I felt it was (respectful) to the comp and to (Crusaders prop) Oli (Jager) after the head knock he got. I think the haka will suffice in respect to local iwi and what the trophy means.

"We'll have a couple of quiet ones and reflect, but we realise we've still got a big game ahead. There are curfews – it's not like normal when you get to your last game and sleep when you can." 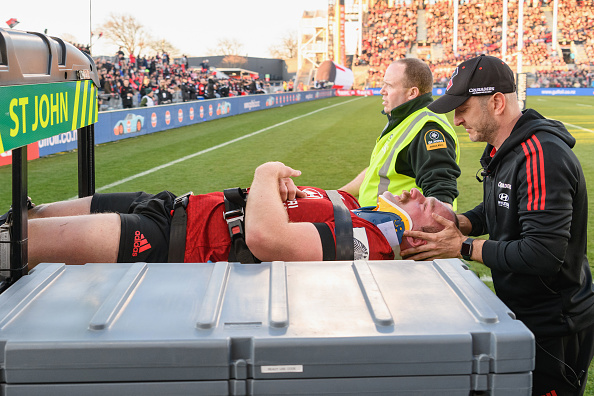 Oliver Jager is taken off the field in the Crusaders win over the Highlanders. Photo: Getty Images
Jager was forced from the field on a stretcher with about 15 minutes left on the clock against the Highlanders after an ugly high shot from Sio Tomkinson which saw the Highlanders midfielder spend 10 minutes in the sin bin.

Jager was the second Crusaders prop forced from the field due to injury in the match, after loosehead Joe Moody left the match after just 15 minutes.

It was a fast and physical match between the Crusaders and Highlanders. Despite being unable to clinch the title themselves, the Highlanders made sure they weren't seen as a team just making up the numbers as they crossed for the first try in just the second minute.

The Highlanders led for most of the game, before the Crusaders ran over the top of them in the final 20 minutes.

"The gas tank was on red for the last 20 minutes; what an effort to come back," Robertson said. "We're really pleased. The last 20 minutes, some of our big players just stood up and the work to scramble on defence and create those opportunities for us to get back down to the other end was pretty special and worthy of a final."

"The powers that be would have loved it to have been next week, that would have been ideal," Robertson admitted. "But it's first past the post and we got there. Now, it's ability to back that up and that will be how we look at the season."