From All Whites loud mouth to friendly-faced fuel boy 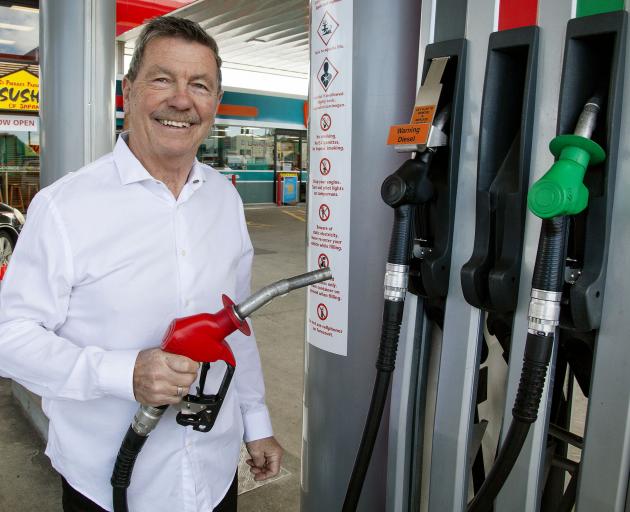 Bobby Almond. PHOTO: GEOFF SLOAN
The Star looks back each week at Canterbury’s sporting icons from yesteryear. This week Gordon Findlater talks to former All Whites defender Bobby Almond about playing in a World Cup and pumping fuel on Blenheim Rd.

The man at the heart of the famous 1982 All Whites defence has gone from loud mouth centre half to friendly-faced fuel boy.

Bobby Almond ran onto the pitch 49 times for the All Whites between 1978 and 1982. He played in all 15 qualifying games for the side en route to their 1982 FIFA World Cup debut in Spain and played in their pool matches against Brazil and Scotland.

Almond has lived in Christchurch since moving from England in 1973. He has worked in the fuel industry for more than 30 years, mostly as a business manager for Caltex. These days he can still be found pumping fuel part-time at Caltex on Blenheim Rd.

Almond, 67, grew up in South London and played much of his early football there before being picked up on an amateur contract with North London giants Tottenham Hotspurs’ youth side.

“I had a chance to go to Millwall being a South London boy, but the thoughts of playing for Spurs was a good draw,” said Almond.

“I didn’t drive a car by then, so it was about two underground trains, four buses and a cycle just to get to training.”

Almond’s youth team at Spurs in 1969/70 had no shortage of success. In his one year with the side, they won the national youth league and three different cups, including the FA Youth Cup. The team featured future legends Steve Perryman and Graham

Souness. Perryman played a club record 655 games for Spurs, while Souness went on to win multiple league titles and European Cups with Liverpool.

“He [Souness] was something special. He wasn’t the quickest of players, but just really intelligent and had great skills,” said Almond.

Following the 1969/70 season, Almond was let go by Spurs. He then had a trial with Leyton Orient – which had just been promoted to the second division. His one opportunity to push his case for a professional contract with the club came in an ill-fated match against Queens Park Rangers.

“I was playing right-back at the time and they had a left winger there called Martyn Busby and he just roasted me, roasted me and roasted me again . . . effectively I never saw the manager after, so my endeavours into the professional world sort of stopped from there,” he said.

Almond played for his local non-league side Walthamstow Avenue before making a bold move to the other side of the globe to play football. The decision to come to Christchurch was made after Almond received a phone call from his old team mate Bruce MacDonald, who was managing New Brighton at the time.

“He rung me up during a game and said ‘do you want to come over’ and I said ‘yes, I think I’ll have some of that’ because I was really at a loose end and it’s probably turned out to be the best thing I’ve ever done,” he said.

It didn’t take long for Almond to make an impact at New Brighton.

“It was a different lifestyle for me, but I really enjoyed it. Being a young man I obviously enjoyed the social life quite a lot and used to get into trouble a wee bit. I think I can recall when I was playing for Brighton I got sent off in my second ever game up in

Auckland because I told the ref to F off or something to that extend. That was the rebellious side coming out in me.”

Following one season with Brighton, Almond was recruited by high-flying Christchurch United. He went on to play about 200 games for United between 1975 and 1988, winning four national league titles and two Chatham Cups. He also played one season with Invercargill Thistle in 1982 and played a handful of seasons for Woolston Technical following his time at United, until he broke his leg in 1994.

However, Almond is best known for his time with the national team and helping them reach their first ever World Cup. In 1976, the defender became eligible to play for New Zealand and soon after made his All Whites debut in 1978 against a touring

England B side at the Basin reserve in Wellington. The England B side featured the likes of Glenn Hoddle, Paul Mariner, Brian Talbot, Joe Corrigan and Alan Kennedy.

Almond says Mariner was one of the toughest strikers he ever had to mark. The two had a run in during the match in Wellington, which flowed through to the second match in Auckland.

“I rushed into a tackle with him and caught him on the nose. He had quite a large nose, but it was bigger after that . . . he got his own back in the game in Auckland when he did me in a tackle,” he said.

While Almond says the All Whites run to the World Cup and playing against Brazil and Scotland at the tournament are his career highlights, another special time came as a coach years later. In 2002 he guided Ferrymead Bays – which had been promoted to the Mainland Premier League for the first time – to a league title in their first attempt.

“It was a really brilliant time. I got a lot of pleasure out of coaching that club. I still hold that title win in a very special place,” said Almond.

These days he enjoys walking his dog and the odd round of golf. He’s looking forward to teeing off at The Centre Circle fundraising event at the Harewood golf course on November 29.

The Centre Circle was originally set up by Almond’s 1982 World Cup teammate Steve Sumner who passed away after a battle with prostate cancer in 2017. Before his passing Sumner asked Almond to kick start The Centre Circle, which aims to raise funds for football in the Canterbury region.

US drops extradition against Megaupload defendant