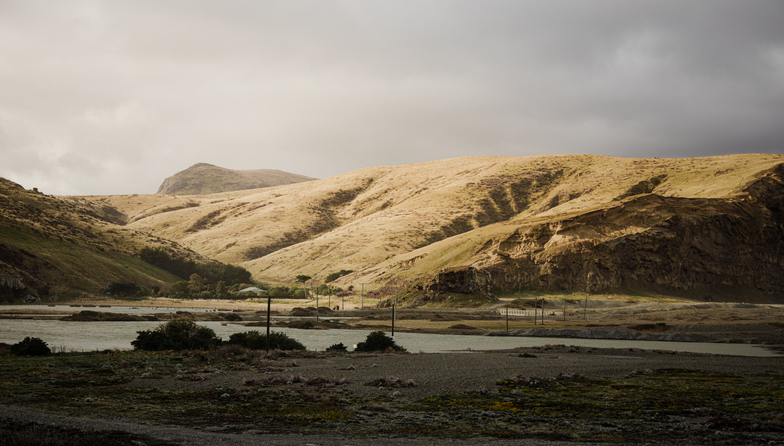 Niwa's noted that it been 47 months since New Zealand last experienced below-average temperatures.

Of the six main centres in 2020, Auckland was the warmest, Dunedin was the coolest, Wellington was the wettest, Christchurch was the driest, Tauranga was the sunniest and Dunedin was the least sunny.

The three of the coldest temperatures of the year were recorded in Otago on June 14, with the lowest being -12.3C recorded in Middlemarch, followed by -10.7C at Ophir and -9.9C at Clyde.

The highest air temperature of the year was 38.2C, recorded at Gisborne on January 31. 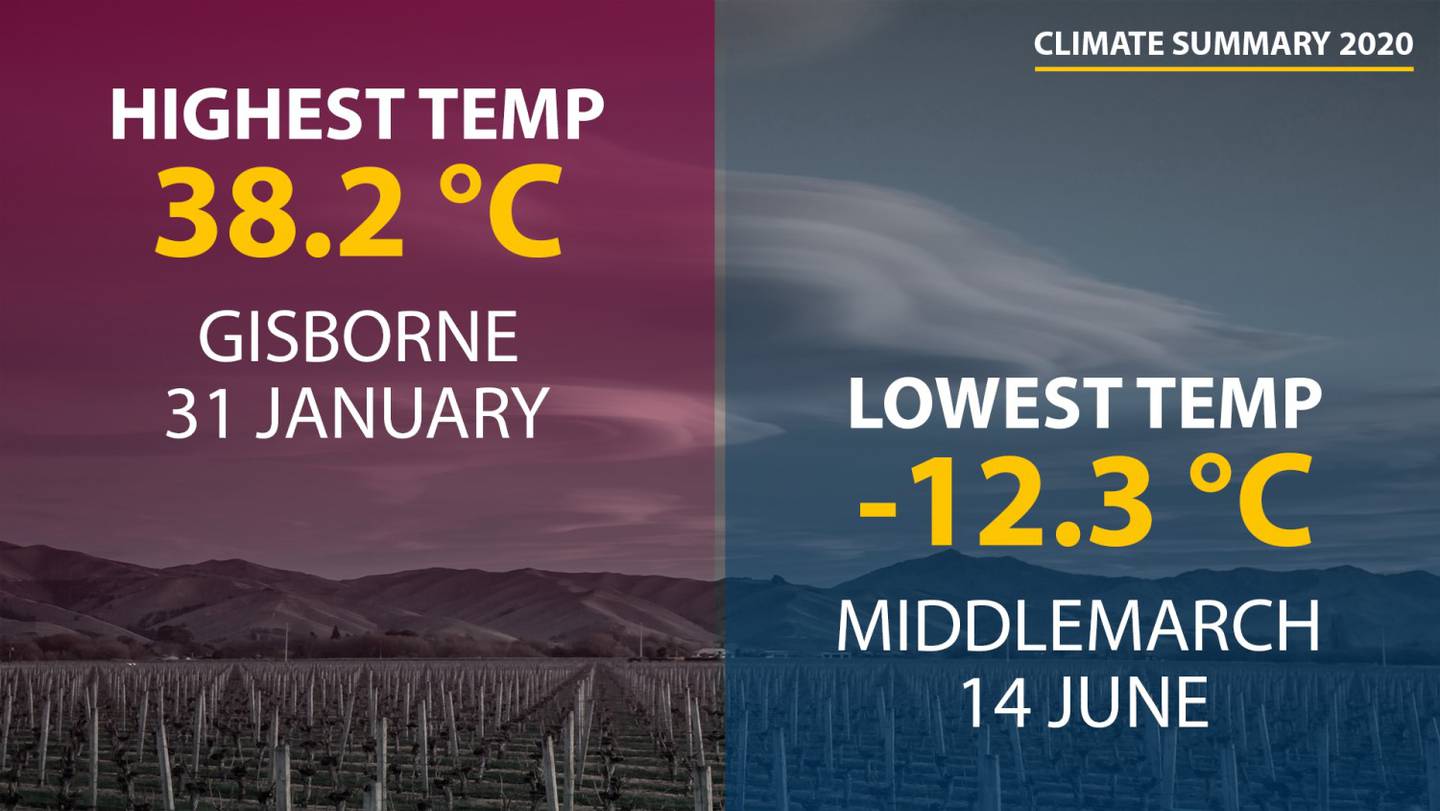 The country's nationwide average temperature for the year - calculated off the 110-year-old seven-station temperature series - came in at 13.24C.

"The warming trend is clear in this country as it is around the world."

"Even though we do not see each year being successively warmer than the last, the warm years are piling up," Renwick said.

"A below-normal year now would be truly exceptional."

Niwa meteorologist Ben Noll said it was difficult to determine what 2020's average might have been had global warming been taken out the mix, and this was something Niwa scientists would be looking at.

"But I think it's fair to say that it wouldn't have been as hot," he said.

"Eighty-eight per cent of the planet experienced above average temperatures in 2020 - so New Zealand is well aligned with the global trends."

Over 111 years, our average temperature has risen by about 1.13C.

That's an average increase of 0.10C per decade - but that rate has quickened to 0.31C per decade in the past 30 years.

That hit air quality in the first week of 2020, and left a layer of ash and debris on the Southern Alps, helping melt ice and snow through last summer.

The hottest spell played out over late January to early February, when several places observed record highs, just as the Covid-19 pandemic was beginning to escalate.

The year's hottest temperature was the scorching 38.2C recorded at Gisborne on January 31 - going down as New Zealand's fifth highest January temperature on the books.

The warm period coincided with an extended dry spell in many places - including an unprecedented 64-day run in Blenheim, but also Auckland's largest drought in a quarter of a century.

That flavour of high pressure lingered through the lockdown period of late March to late April, by which time normal rainfall totals were especially low across the Hawke's Bay, Bay of Plenty and the Upper North Island.

A big factor behind that was a near-record positive Indian Ocean Dipole - the climate driver chiefly responsible for worsening Australia's hellish fires.

But winter proved much wetter than usual northern parts of the North Island, which saw soil moisture levels return to near normal after the persistent dryness observed earlier in the year. 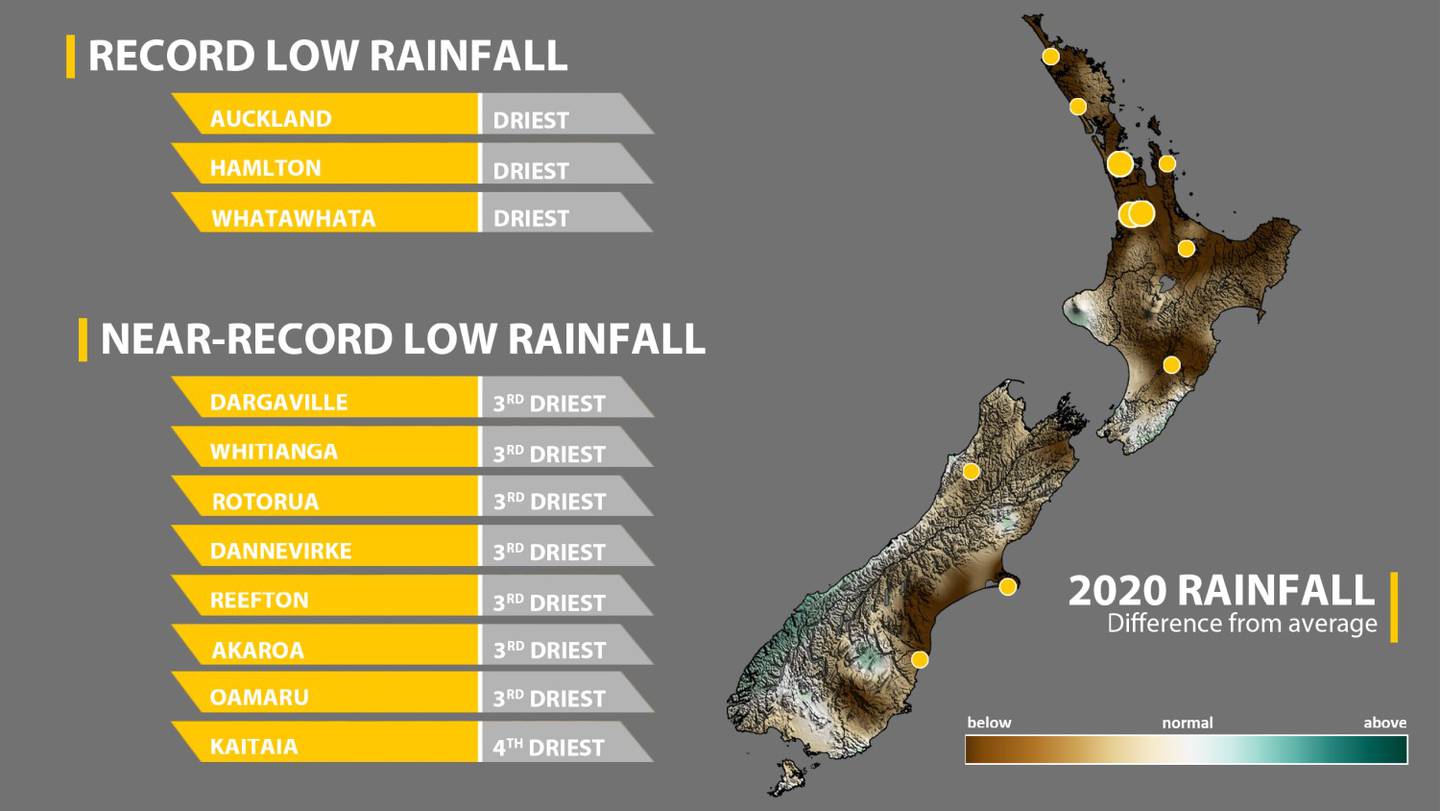 Source: Niwa
It took until late-September for the coldest outbreak of the year to occur.

Renwick said the most remarkable cold snap came at the end of September, when air travelled all the way from the Ross Ice Shelf in Antarctica to the east coast of the South Island.

Snow fell to sea level in Southland and Otago during this time, and daytime temperatures on September 29 struggled to rise above 0C for coastal parts of these regions.

"This is another clear sign of a warming climate."

October and November were warm months for the country, with the former month featuring mostly dry conditions.

In contrast to the dryness of October, November played out as a wet month for much of the country - seen most dramatically when Napier was soaked with 242mm of rain in a single day.

But the dry pattern set in again for the northern North Island across December, when water restrictions were brought in as an atypical La Nina failed to bring its usual rain-making.

Renwick said drought and flood were ultimately big themes of the year.

"The first few months of the year was very dry in the North Island and parts of the South Island, with the Government declaring the drought a large-scale adverse event and providing funds to farmers in many regions, even the Chatham Islands," he said.

"Locations from Northland to Canterbury had their longest dry spells on record."

Meanwhile, devastating floods occurred in the southwest South Island in February, with a state of emergency declared in Southland, and the Routeburn and Milford tracks badly damaged.

"The pattern of a dry north and a wet southwest, with strong westerly winds, is one we are likely to see more of in future as the climate continues to change."

Kiwis can expect more above-average temperatures for the rest of summer - and plenty of sticky humidity - amid the dominant La Nina.

Niwa's outlook for the next three months predicted air temperatures were most likely to be hotter than normal in all regions, at a time the north of the country was sweltering through unusually dry conditions.

But that didn't mean the coming months wouldn't be wet.

"Looking ahead, we can expect extended dry spells - as we've seen through December - will continue over the upcoming three months," Noll said.

"But they'll be interspersed with periods of brief, but maybe highly unsettled weather, where you can have downpours."