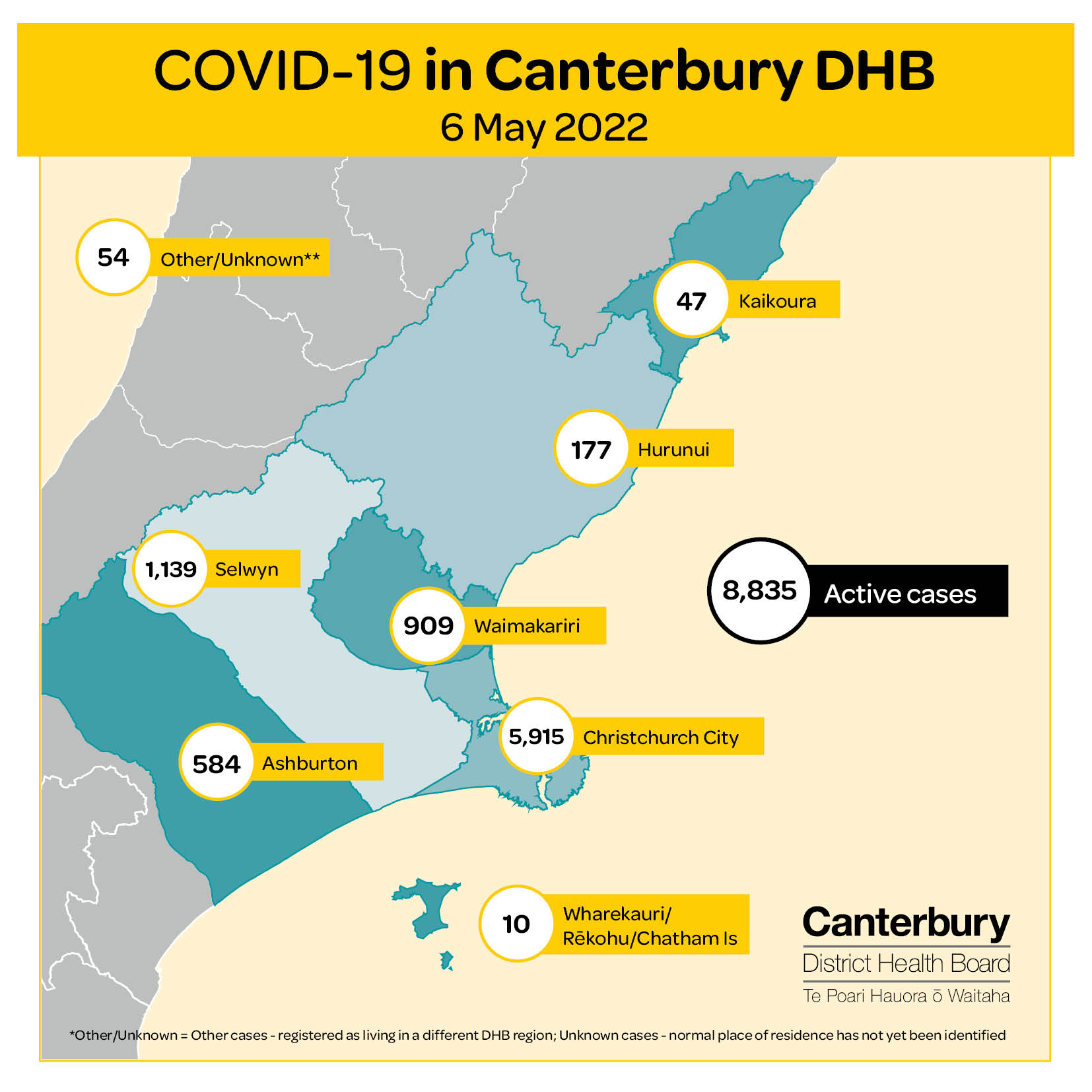 Active cases in Canterbury as of 8am on Friday. Image: CDHB
Two more Covid-19 related deaths and 1261 new community cases have been reported in Canterbury today.

The Ministry of Health said there were 7347 new community cases in New Zealand on Friday, as well as 363 people with the virus in hospital and 24 more Covid-related deaths.

The deaths reported today include 12 people who died over the past three days and 12 who died since April 6.

The total number of publicly reported deaths of people with Covid-19 now stands at 845 with a seven-day rolling average of 15.

Of today's deaths, one person was from Northland, eight were from Auckland, four from Waikato, one from Bay of Plenty, one from Lakes DHB area, one from Taranaki, one from MidCentral, two from the Greater Wellington region, two from Canterbury, and three from Southern. Two people were in their 40s, one in their 50s, one in their 60s, seven in their 70s, eight in their 80s, and five were aged over 90. Of these people, 13 were female and 11 were male.

Of the 363 patients in hospital with the virus, 18 are in intensive care, while 66 are in Canterbury DHB hospitals and four are in South Canterbury hospitals.

The average age of people in hospital with Covid is 57.

The seven-day rolling average of community cases is 7555 - up slightly from last Friday when it was 7540.

There were 79 new cases identified at the border. The number of active community cases in New Zealand now stands at 52,870.

Meanwhile two chiropractors have been fined - one up to $12,000 - for seeing patients in person while unvaccinated during the Omicron outbreak.

The ministry said the pair had been issued infringement notices for providing face-to-face consultations while unvaccinated, breaching clause 7 of the Covid-19 Public Health Response (Vaccinations) Order 2021.

The Health Ministry said it was investigating whether other patients may have received treatment.

"If anyone has seen either of these chiropractors since the start of February 2022, and is willing to provide information about their visit to the Ministry of Health, please email: enforcement@health.govt.nz," said the ministry.

According to the Ministry of Health, of those who had contracted Covid over the past two years 914,741 had recovered.

There are now 821 people who have died with or from Covid since March 2020. The majority of deaths have happened this year as the Omicron variant swept across the country in recent months.

Yesterday, officials revealed that 20 more people had died with the virus, including a child under 10.

There were also 8609 new cases of Covid-19 in the community. The seven-day rolling average of community cases was 7684, down slightly on 7705 at the same time last week.

Meanwhile, 386 people were being treated in hospitals across New Zealand with Covid and 14 people required ICU or HDU level care.

The ministry said the average age of those with the infection in hospital was 58 years.

With the seven-day rolling average of new cases continuing to decline, health officials continued to urge people to get vaccinated and stay away from work or school if people were unwell.

"Vaccination remains our best defence against Covid-19 and a booster – in addition to first and second doses – gives you greater immunity against Omicron and severe illness. There's a much lower risk of being hospitalised if you're up to date with your Covid-19 vaccinations," said the ministry.

Yesterday a new booster jab was announced for immune-compromised children ahead of the winter months.

Children aged 5 to 11 were able to get a third primary dose of the Pfizer Covid-19 vaccine with a prescription from a GP or nurse practitioner.

The ministry said people who were severely immunocompromised were regarded at higher risk of severe outcomes from Covid and might not produce a sufficiently strong immune response after two doses of the Pfizer vaccine.

"A third primary dose offers extra protection and may help reduce the likelihood of transmitting the virus to others," the ministry said.

The booster was able to be given eight weeks after the second dose but the interval could be shortened to four weeks depending on immunosuppressive therapies.