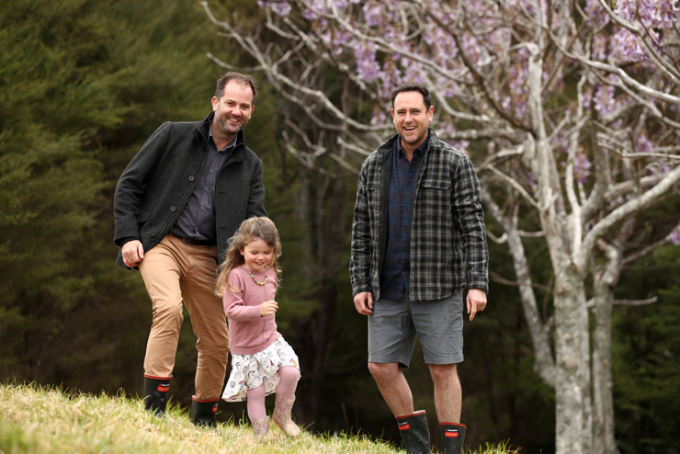 Ryan Harding, Ryan’s daughter Sophia and Matt O’Rourke at Matt’s property in Coatesville. Photo: Fiona Goodall
Matt O’Rourke and Ryan Harding have been working as a team since they started their real estate careers with Barfoot and Thompson eight years ago. In that time they’ve sold more than $300 million worth of property, and it’s all thanks to a fortuitous meeting on a real estate course in January 2012.

So you met doing your real estate papers?

Ryan: Yes, a six week course at Unitec. I stood up and introduced myself on the first day and Matt, who was on the other side of the room, introduced himself and by the next day we were sitting together. We just hit it off. At the time I was living at home with my mum and dad and by halfway through the course my mum was making lunch for Matt, my new mate.

What did you do before real estate?

Matt: I’m a builder by trade, originally from Christchurch. I’d been over in London, doing loft conversions, and I came home after the 2011 earthquake to check on mum and dad. Their house was condemned and I was going to rebuild it but there was lots of EQC drama so that didn’t happen. My sister was in Auckland and I moved up here, where I was building.

Then an old whiplash injury flared up and the fingers in my right hand started to go numb so I gave up building. I’d thought about real estate and decided maybe it was time to seriously look at it, so I enrolled.

Ryan: Our family is in the tourism coach business and I went to Europe and worked for Contiki for eight years, first as a driver then as a tour manager. When I was home on holiday for the summer my brother suggested I look at real estate after I bought a house here. I had a couple of months before I had to go back to Europe so I thought I might as well sit my real estate papers. I just thought of it as a qualification that could be useful. It was meeting Matt that mostly kept me here. We had the chance to work together for Barfoot & Thompson in Grey Lynn and I thought if I don’t stay and give this a go with my good mate, I’ll regret it.

Why did you decide to work as partners?

Ryan: It just seemed like the obvious thing to do. We got on so well, there’s only six months difference in age and we have a similar personality and sense of humour. I think it would be quite lonely working on your own. When you are a team you can share the highs and lows, be there to support each other.

Matt: It was pretty seamless. We’ve got a lot in common personally but professionally we work differently. Ryan is into marketing and the techy stuff, like social media and branding, the bigger picture stuff.

Ryan: Matt’s good at the relationship stuff. He knows people’s names, loves chatting and having a coffee. And him being a builder has added massive value. I will stand at the front door at an open home and hear Matt talking to people about what renovations they could do, illustrating the potential of the house. He can tell them what they’ll need consent for and what they won’t.

Do you ever have disagreements?

Ryan: We’ve had conversations that have become heated. Well, perhaps not heated, maybe it’s more like needing to have a serious chat about what we are trying to achieve. We’ve had different perspectives on things.

Matt: It’s like any relationship. You have your differences but you are able to resolve them.

Ryan: That’s why we’ve gone the distance. You see other teams popping up all over the place and then next thing they seem to have dissolved. I think we’re the longest-serving team in the area.

What has helped you to do so well?

Matt: Good support. We are lucky to have a great manager in Andrew Cosgrave.

Ryan: And we’ve grown a really good team. We have an amazing assistant, Sarah Ashurst, who is our operations manager. And we have two associates, Ben Buchanan and Lisa McGeehan, who make life a lot easier for us. Lisa is my partner — she used to work for Barfoot & Thompson in Devonport and my auctioneer recommended I might want to give her a call so I did. Now we have a three-year-old, Sophia.

Other than building your team, how have things changed since you started out?

Matt: For the first five years we probably worked close to seven days a week. We’d both do open homes because we were branding ourselves as Matt and Ryan so we wanted to be everywhere together. But in the past few years we have changed things so that we work an 11-day fortnight. This week I have a four-day week, and next week I will do a seven-day week. We swap around. That gives us the chance to…

Ryan: … stay sane. It did get to the point where we were working all the time and we had to do something different.

Something we do now is make sure we also look after potential buyers. You’re working for the vendor and you can only sell to one person, so there are people who miss out, and they can be left to flounder. Lisa and Ben can show other houses we have to those people and hopefully it leads to another sale. It also means we have a database of potential buyers which can be useful.

Do you get time to have any interests outside of work?

Ryan: We got into F45 [fitness training] pretty hard. For three months.

Matt: I try to play a bit of golf on my days off and I like tennis. I recently bought a lifestyle block with my fiancee Rachel in Coatesville so that is taking up a bit of my time. Now we’ve got a good garage I can unpack my building tools and do a bit of tinkering. We’d like to turn the house into a boutique venue, maybe do weddings, but I think I’ll end up being the labourer for a builder we employ. I’m too busy with work.

Ryan: There’s not a lot of time in between work and family. My dad belongs to the Porsche Club so I do car activities with him. I love fast cars. I’m saving for my own.