Magnitude 5.9 quake strikes near Taumarunui but felt in Christchurch 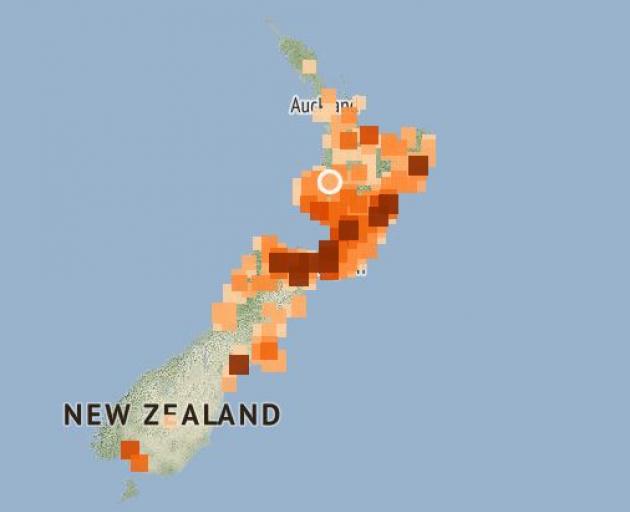 GeoNet said the earthquake struck 30km south-west of Taumarunui and was recorded at a depth of 210km.

The quake was felt as far north as Auckland, while many in Christchurch reported feeling a low rolling tremor.

A person working in Addington said they felt the shake - and initially thought it was a deep quake centred below the city.

More than 4000 people responded to GeoNet's online alert that they felt the quake. The majority of them were in the central and lower North Island but two people from Southland even reported feeling the quake.

While the shake was widely felt around the country, it seems many at the epicentre didn't feel a thing.

Ruapehu Mayor Don Cameron, who is working in Horopito - north of Ohakune - today, didn't feel it.

"No I didn't. I was on a call upstairs of a three-storey building but felt and heard nothing.

"Usually we hear them coming before the shake."

Cameron checked with Civil Defence and Emergency staff, who said it was more than 200km deep.

The shockwave spreads along the fault line that rises as it heads towards Wellington, he said.

"Certainly no reports of damage."

A staff member at BP Taumarunui said he didn't feel it either.

Ruapehu Civil Defence controller Clive Manley said there were no reports of damage or other issues from the quake that was centered to the south-west of Taumarunui.

GNS science reported the earthquake at a depth of 210km and shaking as weak.

Council's civil defence team was ready to react to any calls for assistance but at this stage none had been received, Manley said.

However, a woman in Wellington said she felt the quake - on the 17th floor of an office block.

"I did! I am on the 17th floor of an office block in Lambton Quay - felt like I was bouncing up and down in my chair."