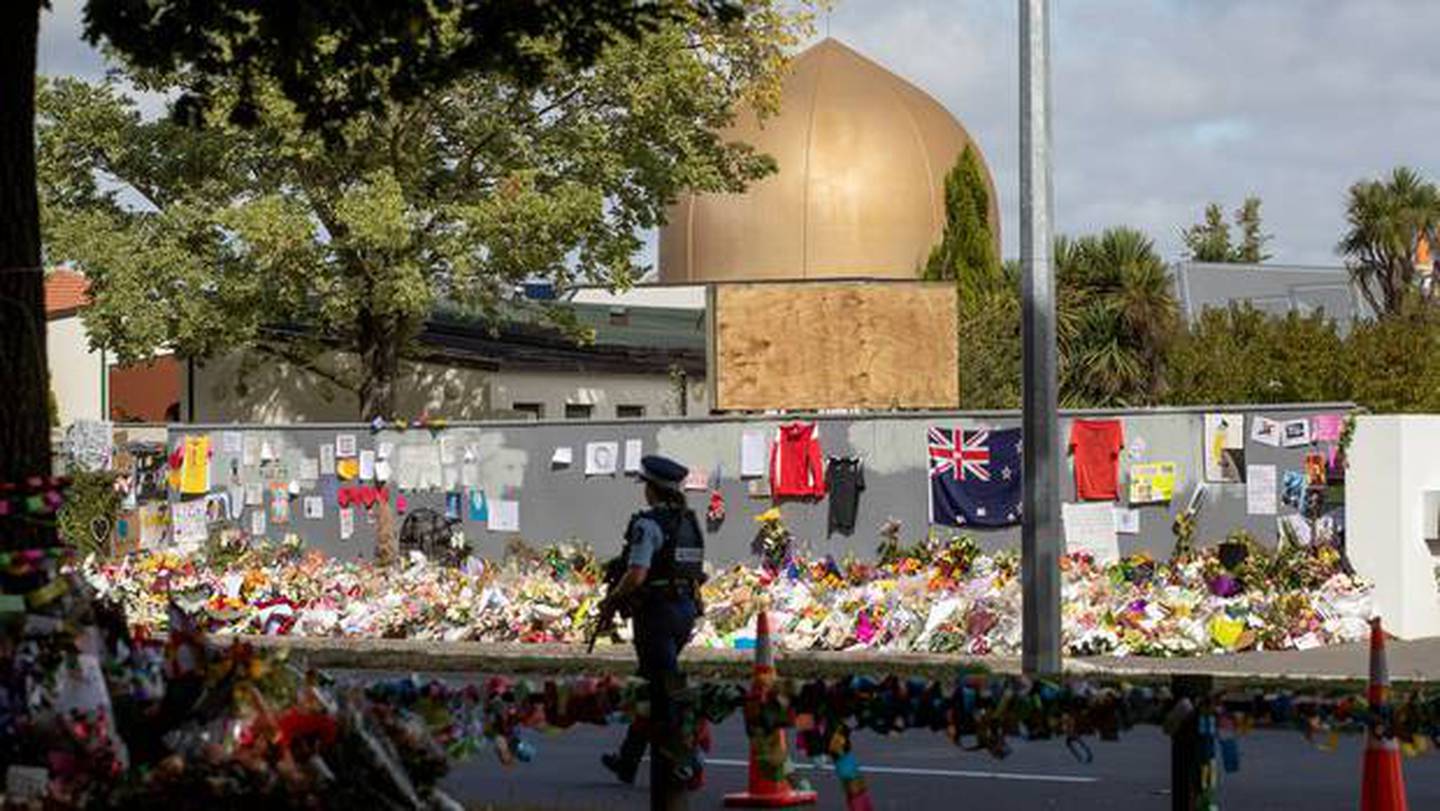 Flower tributes outside the Al Noor mosque, the first of two to be hit by a gunman in Christchurch on March 15. Photo: NZ Herald
A man who shared video footage of the Christchurch terror attack with eight people after advertising that he had it and was willing to send to "anyone" who wanted it has been jailed.

David John Noble, 36, was sentenced to just over two years in prison but has had the term reduced on appeal.

The killer livestreamed the attack on the internet.

The next day the Department of Internal Affairs advised in a public statement that the footage was deemed objectionable and it would likely be an offence for anyone to distribute it.

On March 20 Noble posted on Facebook: "I've got the video if anyone wants it".

While some on Facebook "abused" Nobel for this, others asked for the graphic footage. 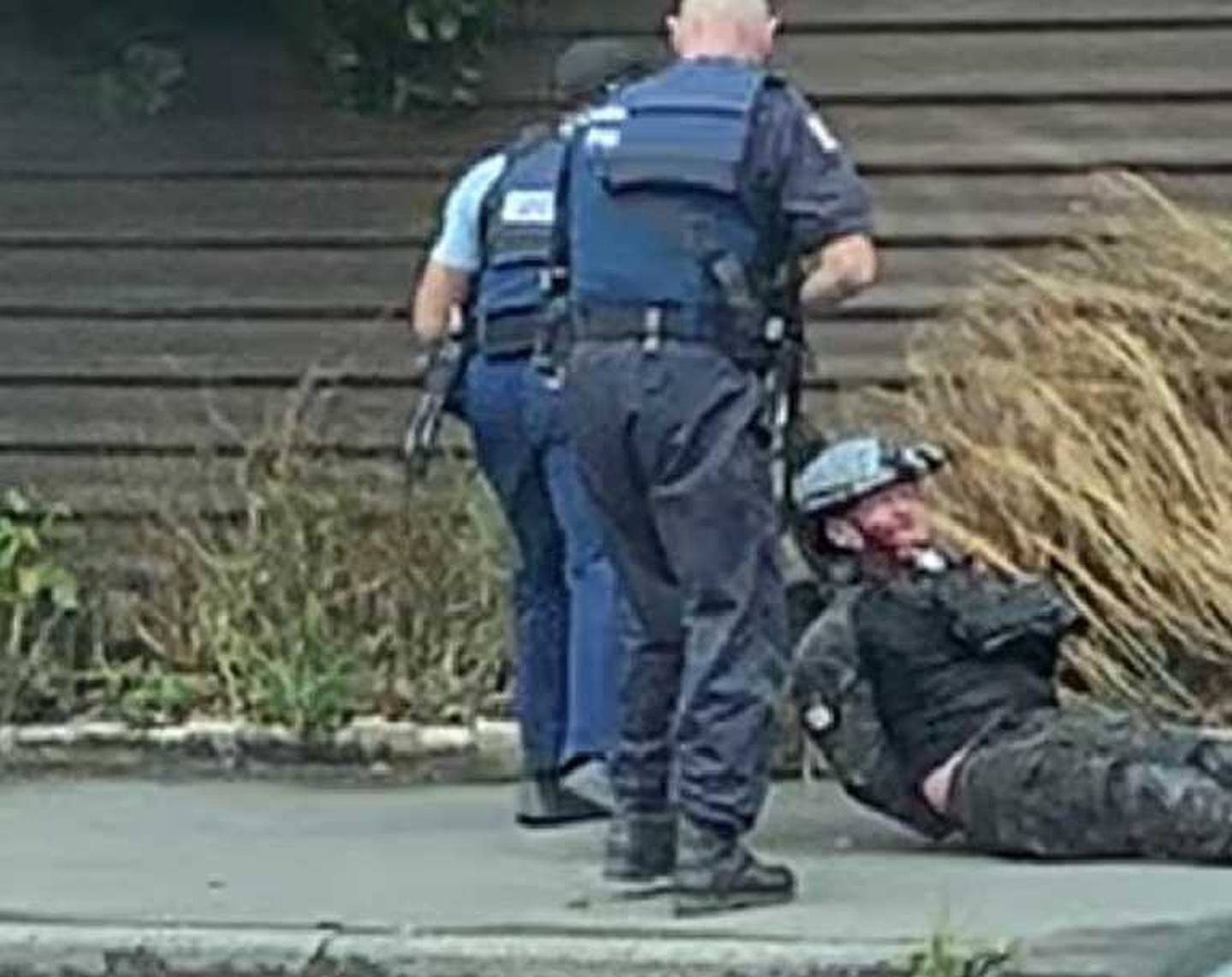 The two officers responded to the March 15 attacks with outstanding bravery when arrested the accused gunman, says the Police Association. Photo: Supplied
He forwarded a link of the footage to eight people.

To those who objected, he said: "I have the right to watch it and so does everyone else to make an informed decision about gun law reform."

In April police executed a search warrant at Noble's address under the Films, Video and Publications Act 1993.

As a result he was charged with possession of an objectionable publication, which carries a maximum penalty of 10 years' imprisonment.

He was also charged with possession of cannabis for sale after police found 2.2kg of the drug in storage containers and drying on a clothing rack.

Noble initially pleaded not guilty to all of the charges but after a sentencing indication was given he changed his tune and admitted the offending.

Court documents released to the Herald state that Noble told police after his arrest that he knew the terror attack footage had been censored.

"But (he) but believed he had the right to freedom of information," the court heard.

In March this year Noble was given a sentence indication of two years and six months' imprisonment.

The judge said a discount of 25 per cent would be available for a guilty plea and ruled out the prospect of home detention saying it would not be appropriate.

After the discount the sentence would have been one year, 10 months and two weeks.

On that basis Noble pleaded guilty.

At sentencing Judge Christopher Harding said that after considering the aggravating and mitigating features and Noble's personal circumstances, he was jailing him for longer than he had initially indicated.

He told Noble no further factors had come to light justifying a reduction and sentenced him to two years and two weeks behind bars.

Noble then appealed against the decision.

His lawyer Rita Nabney told the High Court at Tauranga the appeal was based on the fact that the judge did not indicate a different sentence length was to be imposed and Noble was not given the opportunity to withdraw his guilty plea.

She said "nothing indicated additional information had become available".

The police told the court that the sentence was not manifestly excessive and that home detention was not appropriate because Noble's cannabis offending was undertaken at home and there has been a previous sentence of home detention for similar offending.

Justice Cheryl Gwyn heard the appeal and her decision was provided to the Herald.

She agreed that Judge Harding had erred in moving away from his sentence indication - and quashed and replaced it.

"I consider the sentence indicated was within the available range and should be imposed," she said.

"I do not consider Judge Harding erred in considering home detention was not appropriate.

"Mr Noble's previous home detention sentence for possession and cultivation of cannabis appears to have made no difference to his behaviour.

"And either sort of offending could be committed again while on home detention."

The gunman will be sentenced in the High Court at Christchurch in late August after pleading guilty to charges of murder, attempted murder and terrorism.