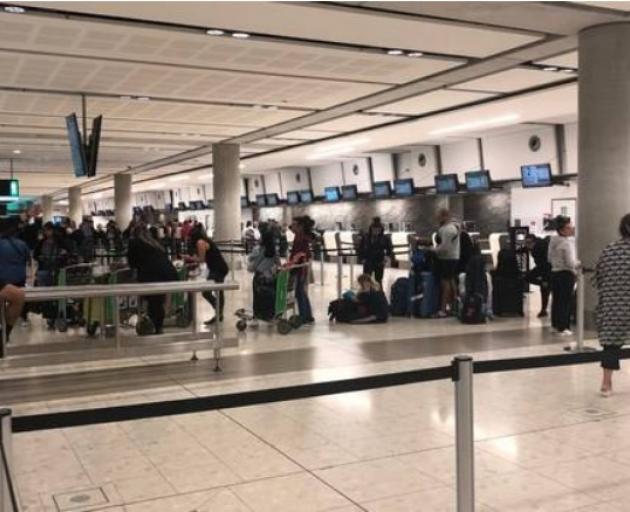 Passengers wait at Christchurch Airport at 3am on Monday after their Sydney-Auckland Jetstar flight was diverted. Photo: Supplied via NZ Herald
Hundreds of Jetstar passengers face a surprise two-day stay in Christchurch after their flight from Sydney to Auckland was diverted at the last minute.

A doctor who was due to be providing life-saving treatment to Auckland patients was among those affected, while others have scrambled to make new arrangements after missing meetings and connecting flights.

Flight JQ203 was due to leave Sydney at 7.40pm on Sunday night, arriving at 12.50am on Monday in Auckland. But the flight was delayed for more than an hour.

One passenger, who asked to be known as Olga, said the "super rushed" flight attendants were urging passengers to hurry onto the plane in Sydney because they were working to a "tight deadline".

JQ203 left around 9pm heading for Auckland - but as the plane started its descent the pilot announced they had missed the deadline. The Auckland runway closed at 1.30am, and they would not arrive till 1.36am. Instead they would be diverted to Christchurch.

Arriving in Christchurch at 2am, the 200-odd passengers found themselves queuing to be given boarding passes for flights to Auckland - on Tuesday, two days later.
They were farmed out to hotels around the city, with Olga waiting till 3.30am to be sent to a hotel - she didn't get to bed until past 5am.

"In their defence, it's hard to sort out 200 people at that time of the morning in Christchurch - which is why in my opinion they should have stayed in Sydney in the beginning and not taken the risk," she said.

Passengers were told Jetstar would give them $30 for food each day and would reimburse them for hotel taxis.

Olga was lucky to be able to work remotely today - her main concern was arranging daycare for her dog in West Auckland.

The Sydney-Auckland flight was diverted to Christchurch, with passengers told they'll be stuck there for two days. Image: FlightRadar24
But other passengers had more pressing concerns. Stefan Wiebe, a medical specialist in intensive care, was scheduled to treat patients with life-threatening diseases at Auckland City Hospital on Tuesday.

He bought a new flight with Air New Zealand for $400, but said Jetstar initially told him they would not cover the cost. They later agreed to reimburse him due to his medical work.

Another group of passengers who had originally been booked for a Melbourne - Auckland flight had been diverted to Sydney, turning their direct flight into a four-day Melbourne-Sydney-Christchurch-Auckland nightmare.

Others missed connecting flights, including one to London, Wiebe said.

Mia Sohnge, 21, was meant to catch a connecting flight from Auckland to Nelson to meet her family for a hike on the Heaphy Track on Tuesday morning.

The track has strict booking times, so she bought a new flight from Christchurch - Nelson to make sure she got there in time. She did not know if Jetstar would reimburse her.

"I feel like they were pretty unhelpful," Sohnge said. "They didn't communicate very well with anyone, and they were very measly with what they were offering us ... it was a huge inconvenience for everyone."

A Jetstar spokesman said the flight was delayed due to due to engineering requirements and Sydney weather holding, preventing it from arriving prior to Auckland Airport's curfew.

Customers were offered the next available Jetstar flight, along with accommodation and meal vouchers, he said.

"We know delays are frustrating and we apologise to customers for the inconvenience to their journey."

Jetstar will reimburse any affected customer who chooses to complete their journey with a different airline, he said.

"In relation to flight JQ203, our team were in regular contact with Jetstar to remind them of our runway maintenance schedule prior to the aircraft leaving Sydney," he said.

"Despite the initial delay and impending runway closure, the decision to operate the flight to Auckland was made by Jetstar."