Photo: Peter McIntosh / ODT Supplied
Petrol prices have continued to tumble with unleaded 91 down more than 20c a litre on just a week ago - the price drop giving much-needed relief for motorists.

Today, at the time of publication, the cheapest in Christchurch was Waitomo Fitzgerald with unleaded 91 advertised for $2.53 per litre.

In Auckland the cheapest was Mobil Cavendish Drive in Papatoetoe with unleaded 91 for $2.56 per litre.

In Dunedin unleaded 91 was cheaper still at $2.51 at the NPD self-service station in Andersons Bay. In Wellington the cheapest place for petrol was $2.65 per litre at Caltex Old Hutt Road.

In Auckland, even at the most expensive place to fill your tank - GAS Kaurilands in Titirangi - unleaded 91 has dipped just below the $3 mark at $2.99 according to the Gaspy app.

The relief at the pump comes as petrol costs drop overseas and Energy Minister Megan Woods asked petrol companies to cut their fuel margins. Despite the drop, margins are still at a historical high.

Greig Epps from MTA said the price drop was good news at a time when supply chain issues and increased transport costs were high.

He said often smaller petrol stations were blamed for high prices but these had been set well before.

"The petrol stations often cop the flack for prices when actually by the time it gets to the pump all the pricing has been done," he said.

"The wholesale market is what needs to be looked at and minister [Woods] is following up on what the Commerce Commission has said - keep an eye on the importers and the wholesale middle market.

"Some pressure in that space should translate to some better pricing at the pumps."

This week's lower prices come after a year of steadily climbing petrol costs.

In March Finance Minister Grant Robertson and Energy Minister Megan Woods announced a short-term cut in petrol excise duty. This has just been extended until the end of January.

The cut reduced the cost of filling a 40-litre tank of petrol by more than $11, Robertson said.

The petrol price drop comes at a time New Zealanders face a cost of living crisis.

A new study by not-for-profit organisations Orange Sky and conducted by YouGov revealed many New Zealanders were facing hardship and struggled to pay bills and buy essential items like petrol and food. 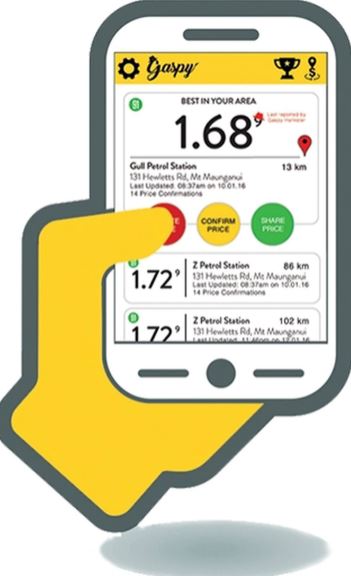 The Gaspy app helps motorists find the cheapest fuel near them. Photo: Supplied
The study found one in four Kiwis struggled to make ends meet at least once a month with some fearing they would lose their home, as inflation hits 7.3 per cent.