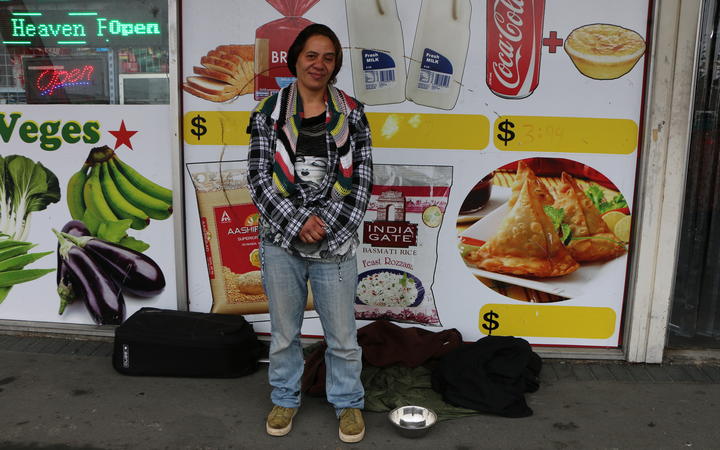 Rexine Tihema has been living on and off the streets since she was a teenager, but says she really wants a home. Photo: RNZ / Conan Young
People are increasingly living in cars and garages in Christchurch as many struggle to keep up with spiralling rents.

The surge in homelessness is happening as temperatures plummet below zero, leading to concerns for people's welfare.

Rexine Tihema was found sitting outside a dairy in the suburb of Linwood on a cold and wet Ōtautahi day.

Now 42, she had been on and off the streets since she was a teenager.

When asked where she was sleeping, she pointed to a spot over the road next to an empty building.

"I'm sleeping over there and I've made sheets up and made homemade tents and I've had the cold off my head."

On those clear, still winter nights when temperatures plummeted to -4C, she tried to find space on a couch at a friend's place, but there wasn't always room.

"A lot of people think, you know what a life, but it's me living this life. I don't like living it. I know I can do better. I just need a home."

The hardest thing about living on the streets was how lonely you ended up feeling, Tihema said.

"The street life, sometimes it pushes you to suicide, and that's what we don't want. I've met one of the boys just the other day, and he told me he wanted to kill himself. And I said to him, 'Son, don't you think like that. All you need to do is look for the right groups that love and care about you.'...he comes to look for me all the time now."

City Missioner Matthew Mark said there had been a drop in the number of people in Tihema's position, living on the streets.

More of a worry these days were the so-called hidden homeless - those living in cars, garages or on a friend's couch.

They had seen a 13 per cent increase in July compared to last month in people coming to them for help with accommodation, and rising rents were to blame, he said.

"In order for a family to be in poverty, they're earning $33,000 or less. Almost everywhere around our country at the moment, rent would soak that up full stop. They are the people who end up in garages or sleeping on couches or in their cars."

They were starting to see results from a new approach, where they worked on the underlying issues that might be leading to a person's homelessness.

An example was their success in helping one man give up the booze after years of alcoholism.

"Last week he had an interview with a government organisation and secured a job and he started with them on Tuesday. So he's since moved into our transitional housing and later on next week is going to be moving into his own place out in the community."

Tinna Dockerty, who spent two years on the streets when she was 15, had devoted her life to helping the homeless in Ōtautahi, calling many of them friends.

She had been involved in serving up hot meals and hugs every Tuesday in the centre of the city.

"This time of year, it's extremely tough and this is where they get sick. And people will drive past and go well, I only saw two homeless people, but they're the ones you see. The ones that are in the sheds, the abandoned buildings, on the couch and in a car. Those are the ones that you don't see."

For many the streets provided a feeling of freedom, and she warned there was often no quick fix for the issues that lead them there.

"We're dealing with mental health as well. You're dealing with addiction, drugs and alcohol. A lot of them use drugs as an antidepressant, as a painkiller. You know, it's a long day out there with no food and in the cold. So you need something to ease that."

Back in Linwood, Tihema was hoping Work and Income would find her some emergency housing.

One day she hoped to take a music course at polytech and be reunited with her children.