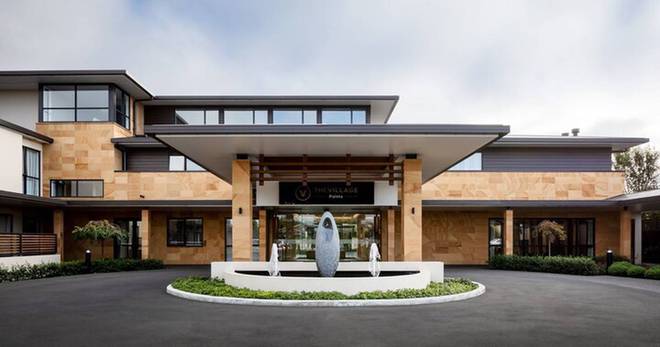 The Village Palms Retirement Community in Shirley advised of the lockdown in a letter to family members. Photo: Supplied
A second Christchurch retirement village went into lockdown last night and residents are being tested for Covid-19.

Brookhaven Retirement Village in Woolston has reportedly tested eight of its residents and put them in isolation after they displayed flu-like symptoms.

Emergency-only visits were being accepted, and those visiting were asked to wear masks and use hand sanitiser, a nurse told Stuff.

It was revealed this afternoon that the Village Palms Retirement Community in Shirley had advised family members in a letter that it was in lockdown after residents began displaying symptoms of a respiratory illness.

"We currently have several residents on our first-floor care unit who are displaying symptoms of a respiratory illness," the letter says.

"We have forwarded swabs to the Public Health Department to test for Covid-19."

"We've implemented the normal precautions - it's normal procedure to alert DHB and public health if more than three residents show signs of respiratory illness, or any illness really. It would be the same for gastro.

"There's nothing to suggest it's anything other than the normal flu."

A Canterbury DHB spokesman said the ill residents were being tested as a precaution, after it was informed of "a number of cases of respiratory illness" in the resthome.

"The facility also contacted a local GP who has arranged for a number of people to be tested, as is the usual process during winter when a number of respiratory illness routinely circulate," he said in a statement.

"Because the affected residents have mild respiratory symptoms, testing for Covid-19 is being undertaken as a precaution, as well as testing for other respiratory viruses."

As there was currently no community transmission of Covid-19 in New Zealand, it was "highly unlikely that this outbreak is due to anything other than normal seasonal respiratory illness," he said.

There are 34 beds at the village, according to its website.

Owners Jenny and Finn Stokes say they have "two decades of experience in the aged-care industry".

There is no sign of CDHB, St John or any other emergency responders at the facility yesterday afternoon.

Many of the building's windows were open and some of its access gates shut up.

But gardeners were still working in the grounds and staff were seen leaving.