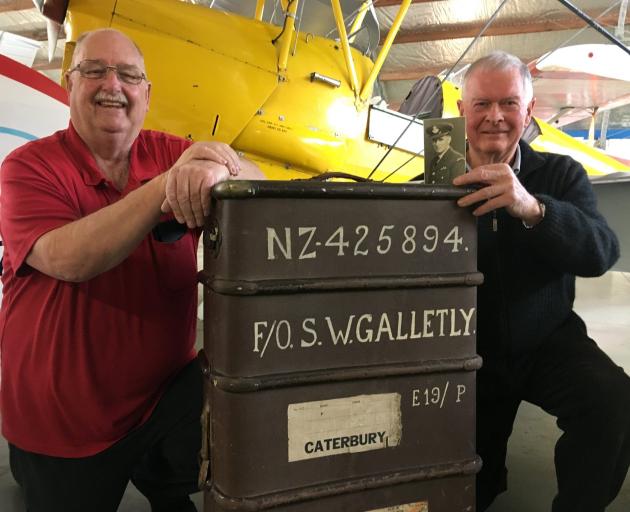 Ashburton Aviation Museum president Warren Janett (left) and Warren Galletly with his father Stanley's WW2 trunk which is part of the memorabilia given to the museum. Photo: Ashburton Courier
Warren Galletly has spent the past 42 years being custodian to his father Stanley’s historic WW2 memorabilia and last week he handed some of those items to the Ashburton Aviation Museum for safeguarding and display.

He was the youngest child of 13 born to Harriet and John (known as Jack) Galletly.

Stanley enlisted in May 1942 and learned to fly Tiger Moth planes at Ashburton Airfield training base during WW2.

He formed solid friendships during the training time with other Cantabrians also training, Warren said.

He was eventually deployed overseas but during his lifetime was very reserved about sharing his wartime stories so there are still some gaps on his wartime activities. Warren’s younger brother Melvin plans to research the entries on Stanley’s log books for more insight.

They do know he was a pilot instructor on the Isle of Man, midway between Ireland and England, and trained other pilots to fly, including Polish airmen.

Stanley was also a commissioned officer and kept on in the United Kingdom after the war ended.

He flew an Arvo Anson, a British built twin-engined, multi-role aircraft, while there.

“He didn’t talk a lot about what he did in the war … to him it was a matter which someone had to deal with it,” Warren said.

Warren, who grew up in Mid Canterbury but now lives in Christchurch, was keen for his father’s wartime history to be shared as time was moving on. He has more items for the museum which he will get ready for display, such as his father’s commission certificate signed by King George VI and his war medals.

Stanley eventually returned to the home farm in 1947 and met four-year-old son Warren for the first time.

“His resting place is just down the road in the Ashburton Cemetery, but I sensed that he was landing his beloved Tiger Moth there with us (today),” Warren said.