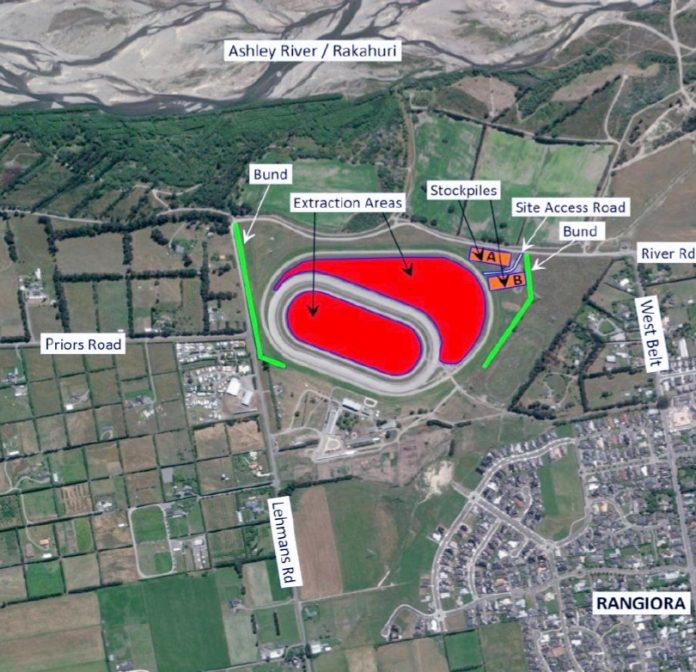 A map accompanying the application shows the area to be quarried in red. Photo: Supplied
A gravel quarry planned at the Rangiora Racecourse has riled nearby West Belt residents.

Taggart Earthmoving Ltd has applied to the Waimakariri District Council to establish a quarry inside the track, and on racecourse land to the northeast.

It anticipates it will extract up to 700,000 cubic metres of material over a 15-year period.

Angry West Belt residents say their property values will plummet, dust and noise will disturb their lifestyle, their rural outlook to the west will be an eyesore, and the retirement plans of some to subdivide will be in tatters.

“There is not a great lot of income coming out of racing at the moment.”

The club looked at how best to use its grounds and supported the Taggart application. The company had an issue with not being able to access the nearby riverbed during the nesting of birds, so being able to use the racecourse provided a “reasonable combination of benefits”.

“Taggart gets the shingle and we derive some benefits,” Mr Wright says.

The land is zoned rural, and is not suitable to subdivide for housing. A minimal area would be dug up at any one time and any potential for dust and noise from quarrying were for the council and Environment Canterbury to deal with during the application process.

“We don’t see any disruption to the activities at the course.”

"We are not digging up anywhere where horses are worked and the impact from vehicles would be confined to River Road."

If the bid was successful, the club would enter a commercial deal with Taggart, ensuring the land was remediated and regrassed.

Taggart, in its application, says it anticipates operating from 7am to 6pm Monday to Friday, and 7am to 3pm on Saturdays. Hours would depend on demand and may not be continuous.

Up to 15,000 cubic metres could be stockpiled on site in mounds up to 5m high. However, extraction would be limited by racecourse activities and would generally occur from 10am to 5pm.

Council regulation manager Nick Harrison says the resource consent application from Taggart is in its infancy.

It had been lodged, and staff had sought more information.

Meanwhile, the council has been given a heads-up about the proposal by planning staff.

"Once we have received a full and final application, the effects on nearby residents will, of course, be considered as part of the resource consent process.”