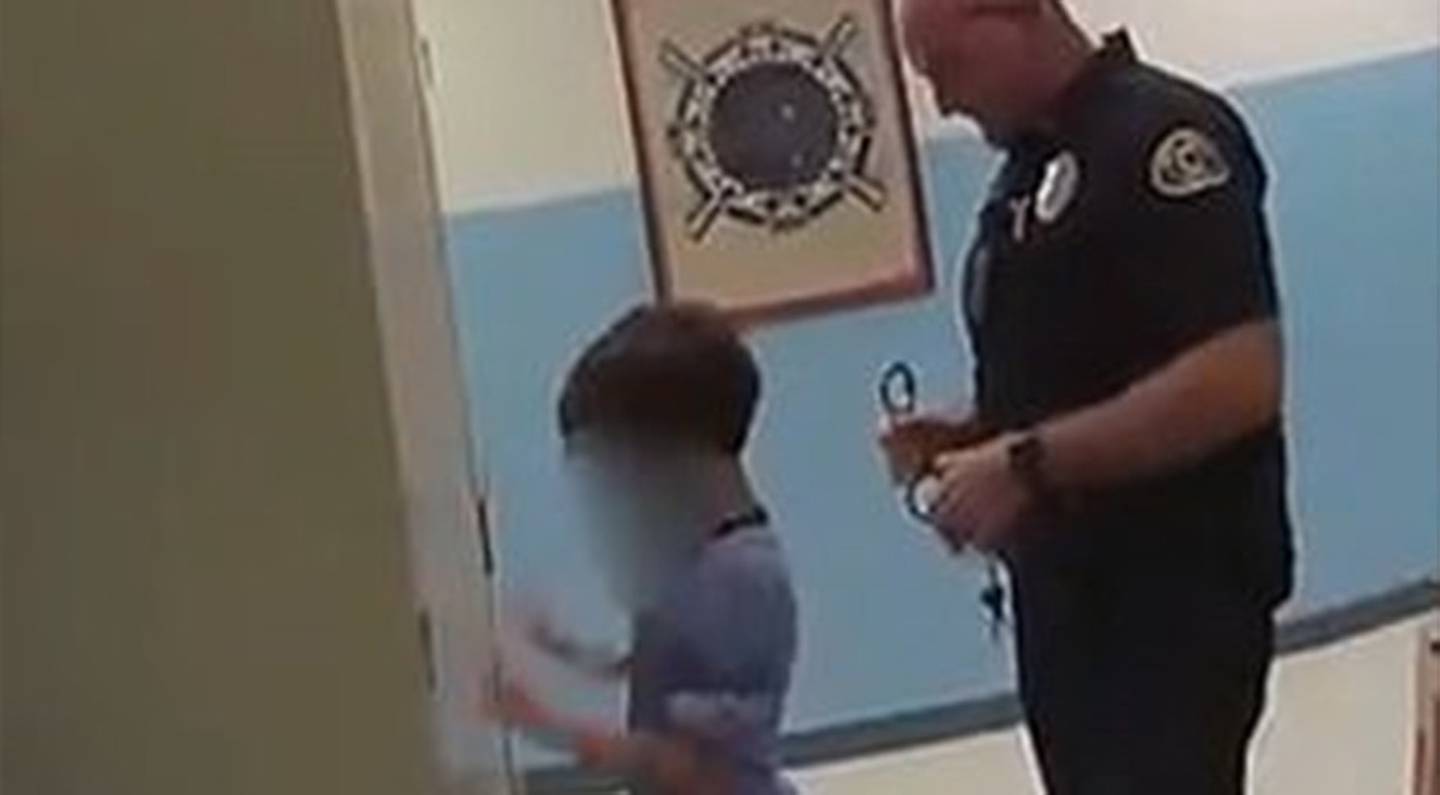 The officers told the child he's going to jail as they tried to put him in handcuffs but they didn't fit as they were too big. Photo: Attorney Crump
Harrowing video has surfaced showing police officers attempting to handcuff a crying eight-year-old boy with special needs, telling him he's going to jail.

The Florida primary school pupil was arrested on a felony battery charge after he punched a teacher in the chest.

According to the arrest report the boy's teacher said the child was not sitting properly in his cafeteria bench seat.

The teacher apparently asked the boy several times to sit down, but he refused before she asked him to sit next to her.

He refused and told her, "Don't put your hands on me."

Police in Key West tried to put an 8-year-old boy in handcuffs and transport him to jail to “scare him straight.”

Police should have no role in punishing our kids or pulling traumatic stunts like this in our schools. pic.twitter.com/2gFzHlvwLL

She then told the boy to walk with her. He responded, saying: "My mum is going to beat your a**" and punched her with his right hand.

Police were then called to the school, where they attempted to handcuff him before marching him away in the squad car.

Bodycam footage shows the police's response to the boy, where one officer was heard saying "You're going to jail. So you need to stand up and put your hands behind your back."

Another officer is then seen frisking the child as he put his hands on the wall before being placed in handcuffs.

The boy is then seen crying before being led out of the school by police. 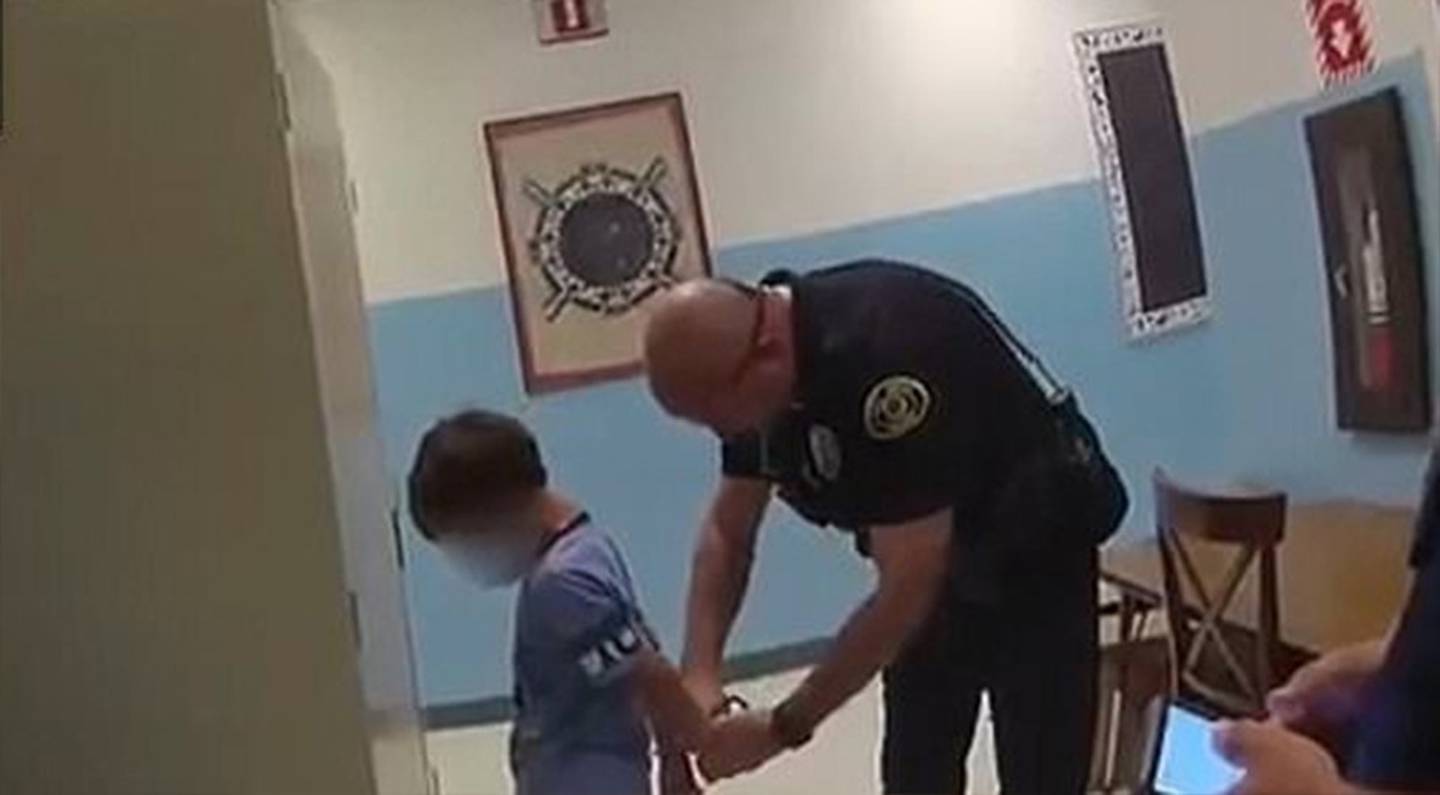 The officers told the child he's going to jail as they tried to put him in handcuffs but they didn't fit as they were too big. Photo: Attorney Crump
A teacher then comes to the boy's aid, comforting him before he's escorted away from the school.

"You understand this is very serious okay and I hate that you put me in this position and I have to do this. The thing about it is that you made a mistake and you have to learn from it and grow from it and not repeat the same mistake again," an officer sternly tells the boy as he nods.

The incident happened in 2018, but has surfaced after Tallahassee attorney Ben Crump, who represents the families of George Floyd, Breonna Taylor, and Ahmaud Arbery, shared video of the arrest Monday.

"Unbelievable!! @KWPOLICE used 'scared straight' tactics on 8yo boy with special needs. He's 3.5 ft tall and 64 lbs, but they thought it was appropriate to handcuff and transport him to an adult prison for processing!! He was so small the cuffs fell off his wrists!" he tweeted. 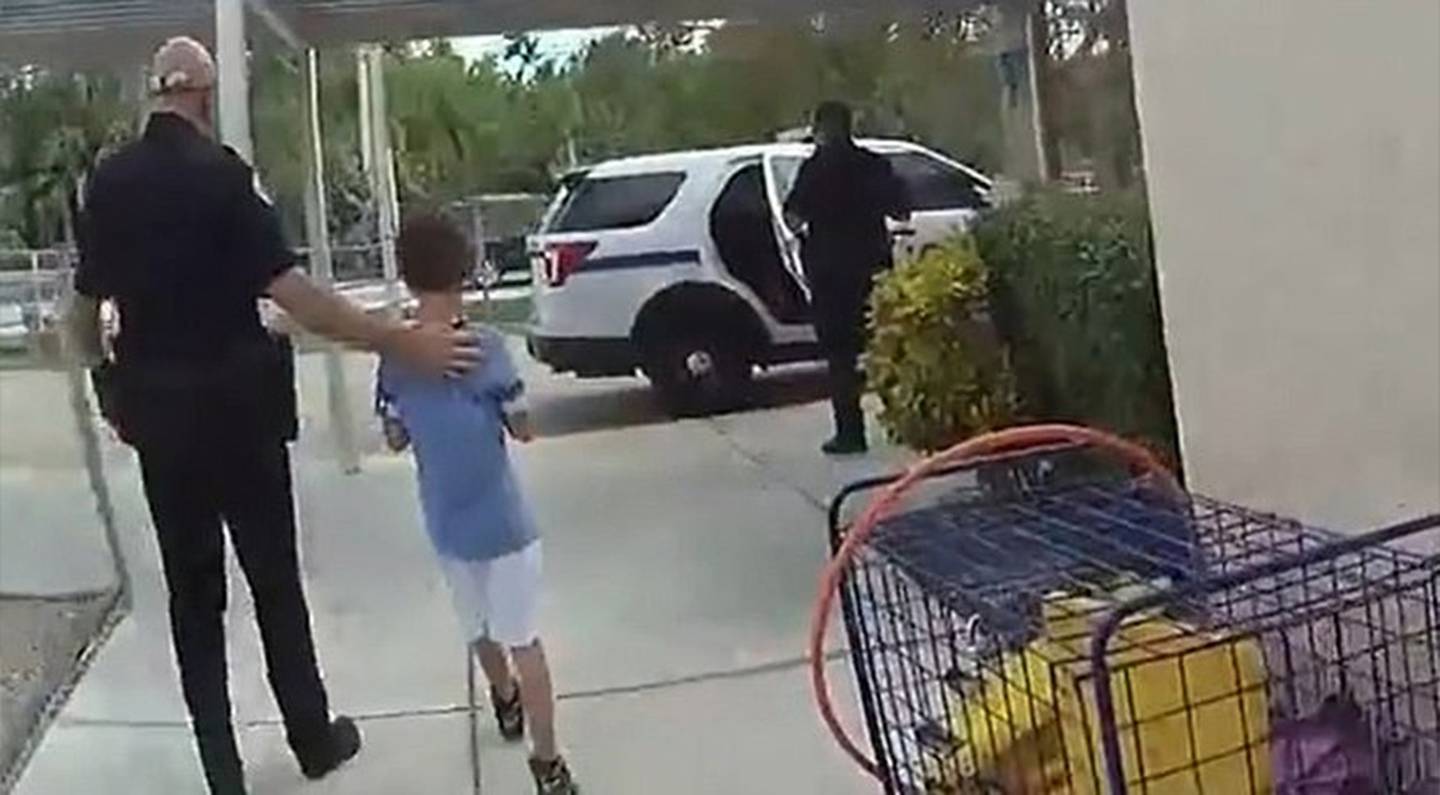 He was then escorted out of the school and taken into a squad car and later booked into a juvenile justice facility. Photo: Attorney Crump
Police say the boy was not taken to an adult prison.

It's not immediately clear if the resurfaced video is in a civil case against the Key West Police Department.

"Based on the report, standard operating procedures were followed," he said.

"Police in Key West tried to put an 8-year-old boy in handcuffs and transport him to jail to 'scare him straight.' Police should have no role in punishing our kids or pulling traumatic stunts like this in our schools," he said.