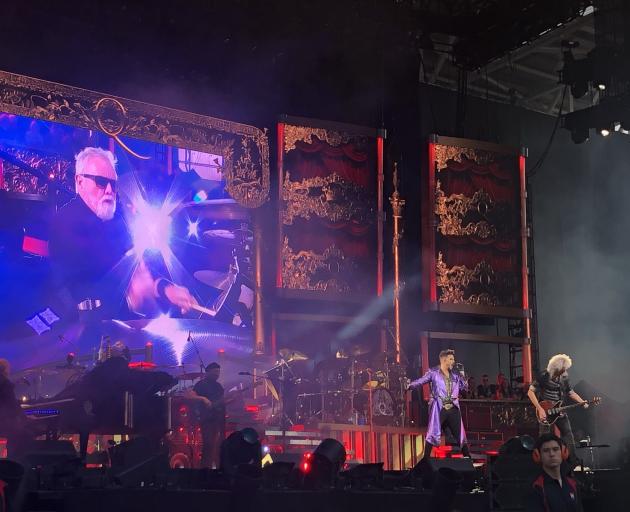 The band entertained with a catalogue full of hits, a big production and homages to former lead singer Freddie Mercury. Photo: Supplied
About 30,000 people eagerly welcomed Queen and Adam Lambert when they played at Forsyth Barr Stadium for the first time ever.

The crowd was anxious for the legendary group. Before the show started, they began clapping in the rhythm of the anthem We Will Rock You.

Fans were not disappointed – the original members Brian May and Roger Taylor, along with flamboyant singer Adam Lambert delivered a non-stop, over-the top music affair filled with pomp, glam and good old-fashioned rock and roll.

The band entertained with a catalogue full of hits, a big production and homages to former lead singer Freddie Mercury.

The show began about 8.45pm as a silhouette of guitarist Brian May high above the stage drew a roar from the audience before the rest of the band joined him to play Now I’m Here and Seven Seas of Rhye.

And while Mercury remains irreplaceable, Lambert’s talents and interpretations have proved to be a formidable match.

He did not try to sing or act like Freddie. Instead, he embraced his role as a singer in what is, at its core, a highly paid tribute act.

After singing Killer Queen, Lambert addressed the “pink elephant in the room.”

His gratitude for the position evident when he thanked Queen’s co-founders.

While Lambert was one focal point of the night with his sparkly costumes and compelling vocals, May’s centre stage moments were equally engaging.

With just an acoustic guitar and seated on a stool, he delivered an intimate Love of My Life, which ended with a projection of Mercury singing the last notes.

It was an emotional highlight of the night with the crowd illuminating the stadium with their mobile phones.

The hits kept coming, with the band effortlessly playing Somebody to Love, Under Pressure and I Want to Break Free.

The stage was reinforced by visual displays that included psychedelic laser lights and set designs that mirrored the lyrical and musical range of the band, from the intimate to the fantastical.

Astrophysicist May was able to combine two of his favourite things – space and guitar. He delivered an intense guitar solo elevated in the air as lit-up model planets hung in the air around him.

In another moment, the crowd mimicked the famous Live Aid performance of Radio Gaga by clapping along during the choruses.

However, the band saved the best for the last.

Set closer Bohemian Rhapsody brought the house down. As the iconic music video played in the background, the entire audience rocked out with the band until the song’s dramatic finish.

And for the encore, the band stuck to tradition and had the audience clapping their hands and stomping their feet throughout We will Rock You and We are the Champions.

After two hours and fifteen minutes, the crowd was delighted with Queen’s musical extravagance.

God, save the Queen.