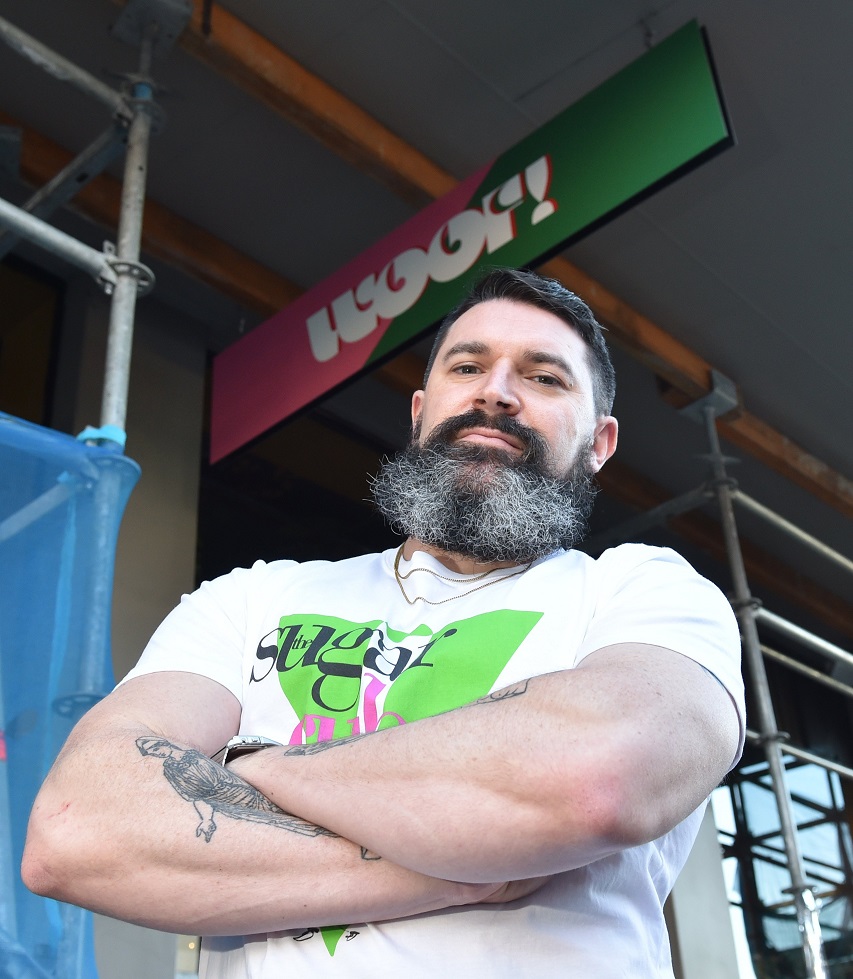 Woof! co-owner Dudley Benson. Photo: Gregor Richardson
A Destiny Church pastor has been accused of intimidation after he posed outside a queer-friendly bar co-owned by a South Island businessman.

Woof! co-owner Dudley Benson said he helped promote a counter-protest attended by about 200 Dunedin residents in opposition to about 30 supporters of the Freedom and Rights Coalition (FRC), who were protesting against Three Waters reforms and vaccine mandates in the Octagon on Saturday.

In the lead-up to the protest Mr Benson received two anonymous death threats through the bar’s social media account, and messages from FRC leader and Destiny Church pastor Derek Tait, of Christchurch, including an image of Mr Tait pointing at the bar.

Over the past two nights I’ve received two unprovoked death threats from Freedom & Rights Coalition supporters who today are marching in Dunedin. Then last night Destiny Church cuck and F&R leader Derek Tait took a pic outside our bar and sent it to us and several others. pic.twitter.com/uUXEUDexMH

He had reported all the messages to police, Mr Benson said.

Mr Tait said sending the photo of him standing outside the bar was "pretty much child’s play" compared with the behaviour of counter-protesters on Saturday, which involved "singing songs with the F word in it and all sorts of other stuff ".

Mr Benson said he believed the goal of Mr Tait’s messages was to intimidate.

While an image of Mr Tait standing outside a bar might seem innocuous, Mr Tait was "well known in our communities for espousing incredibly hateful and dangerous views and ideologies", Mr Benson said.

His first memory of Destiny Church was them showing up en-masse in black T-shirts reading "enough is enough" to a gay pride event in Auckland and performing a haka, Mr Benson said.

"It's not just any person, it's a person who would rather that we didn't exist as a community," Mr Benson said.

Online abuse against marginalised communities was escalating, in part due to the pandemic accelerating the uptake of conspiracy theories.

"My gravest concern is that the next thing that's going to happen in New Zealand is that a rainbow person is attacked or killed," Mr Benson said.

In the past month a drop-in centre operated by Rainbow Youth in Tauranga was gutted by fire in suspicious circumstances and a pink church in Greymouth was vandalised with antisemitic and homophobic imagery.

An investigation was also launched at Bethlehem College, a Christian school in Tauranga, after students protesting homophobic bullying were allegedly subjected to chants of "kill the gays" by other students at the school.

Mr Tait said the photo he took outside Woof! was tongue-in-cheek and involved no threatening words or mannerisms.

He had received death threats himself from anonymous accounts.

His message to the perpetrators was one of zero tolerance, as that behaviour was "absolutely not on".

Mr Benson’s claim that Mr Tait would rather queer people did not exist was "absolute rubbish", Mr Tait said.