Director general of health Dr Ashley Bloomfield says there are four probable cases with symptoms linked to the community outbreak of Covid-19.

There is also one new confirmed case in managed isolation - a woman in her 50s, who arrived in NZ from Islamabad who tested positive on her third day of isolation.

The total number of cases is New Zealand is now 1225, with 22 active cases. Bloomfield said.

The four probable cases linked to the community outbreak were all in managed isolation.

Bloomfield said the infected family's visit to Rotorua - the community based cases as revealed last night - had not resulted in anyone being classified as a close contact.

The family stayed at the Waiora Hotel from Aug 8-11 and visited the Skyline Gondola Lodge on August 8.

The family visited a number of locations, including eateries on their trip in early August.

From a health perspective, Bloomfield said level 2 was an appropriate alert level for Rotorua.

Testing continues and there are roughly 6000-7000 people to test in Auckland, Rotorua, Christchurch and Wellington.

As of midday, just over 200 close contacts had been identified, over 100 had been phoned by the Ministry of Health.

"Because I think there is a serious and significant risk to the public ... I require the following people to do two things: to isolate at their usual home and to not go out to work until they are contacted by our national health service."

This applies to any employees of Americold in Mt Wellington, and the Dominion Rd branch of Finance Now in Auckland.

Prime Minister Jacinda Ardern and Bloomfield are providing an update as Auckland enters its fourth hour of lockdown and the rest of the country is in level 2.

She expected to talk about whether all Auckland businesses will be required to carry QR codes to enhance contact-tracing.

Alert level 3 in Auckland and alert level 2 for the rest of the country have been in place since midday today, after the first cases of community transmission since early May were confirmed yesterday.

Those alert levels will be in place at least until midnight on Friday.

He will also reveal if there are any more positive test results. 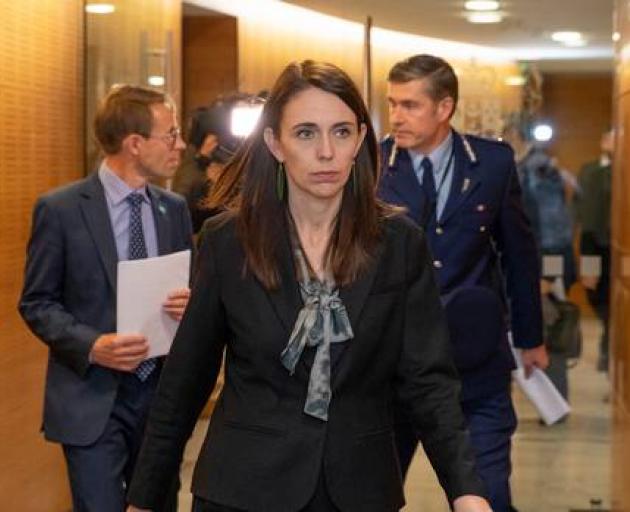 Four people in the family have tested positive and are isolating at home. A decision is yet to be made about moving them to a quarantine facility.

A man in his 50s went to his workplace, a finance company, while symptomatic. The company has been shut down and 130 people are now being tested.

Three people at his workplace are now showing symptoms.

The man's partner, who has also tested positive, works for a company with 160 staff and four sites across Auckland, which have been closed. Surfaces are also being checked for traces of Covid-19.

Every worker at the border or in managed isolation or quarantine facilities are also being tested.

At alert level 3, people are only allowed to travel in and out of Auckland to return home. People who were recently in Auckland are being told to be vigilant, but they do not have to self-isolate. 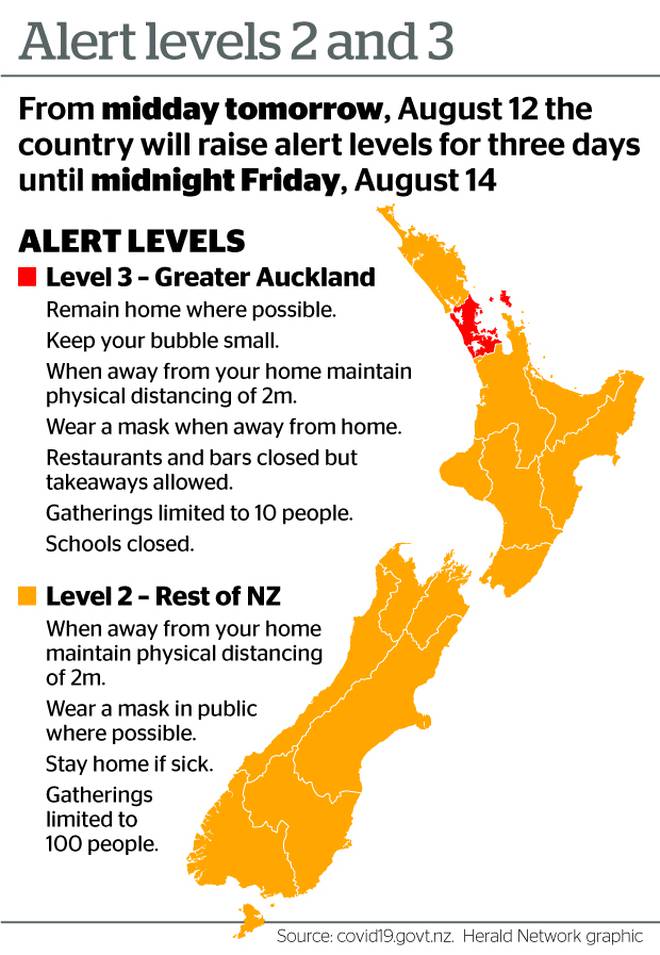 Image: NZ Herald
Police have set up nine checkpoints on the outskirts of the city to ensure travel is only being undertaken for valid reasons.

Parliament was due to dissolve today at 11am but it has been deferred until at least Monday.

Options around the election are being explored and no decisions have been made about whether it will be delayed or not.

National Party leader Judith Collins has called for the election to be pushed back to November, or failing that for Parliament to meet and vote on delaying it until 2021.

All aged-care facilities have closed their doors to visitors, Ardern said, as a precaution.

People are encouraged to wear masks - in Auckland when in public, and for the rest of the country in shared indoor spaces like public transport - and the Government has required people flying out of Auckland to wear masks.

It is yet to decide whether to require masks to be worn in other circumstances.