Director general of health Ashley Bloomfield has revealed two family members who tested positive for Covid-19 travelled to Rotorua while they were symptomatic.

Prime Minister Jacinda Ardern and Bloomfield spoke from the Beehive this morning.  Ardern said the worst case scenario was authorities not being able to track the source of the infection and more Covid-19 cases with no clear links to other cases popping up.

The best case scenario was authorities being able to track down the source, which would make contact tracing much easier.

Bloomfield said genomic testing would be used to help track the source of the infection.

Bloomfield revealed a woman in her 20s  and a child who have both tested positive for Covid-19 travelled to Rotorua on the weekend and visited a number of tourist venues. They were currently tracking where she had been and extra testing was being rolled out in Rotorua.

Surfaces in a coolstore workplace are being tested to see whether freight or something else may have been the origin of the new cases.

There are between 6000 and 7000 people who work at managed isolation facilities and at the border who will be tested.

"We are very confident we didn't have any community transmission for a very long period," Bloomfield said.

"We know the virus can survive within refrigerated environments for a very long time."

If there was another case in Rotorua a nationwide response will be necessary.

"I know that the virus reemerging in our community has caused alarm and the unknown is scary. That causes anxiety for many of us," Bloomfield said.

Currently the family with all four positive cases were self-isolating at home, but they were in discussions about moving to an isolation hotel.

The decision around staying longer in alert level 3 will be based on whether the source has been identified and whether more positive cases appear that can't be linked to a source. At this stage, Auckland will be in alert level 3 until midnight Friday.

"We continue to have arriving New Zealanders that are all operating in a level 4 environment, so there is no reason why we can not continue to do that."

Roadblocks go up in Auckland

Meanwhile police have confirmed they will be staging road blocks after midday today to enforce the level 3 lockdown in Auckland. 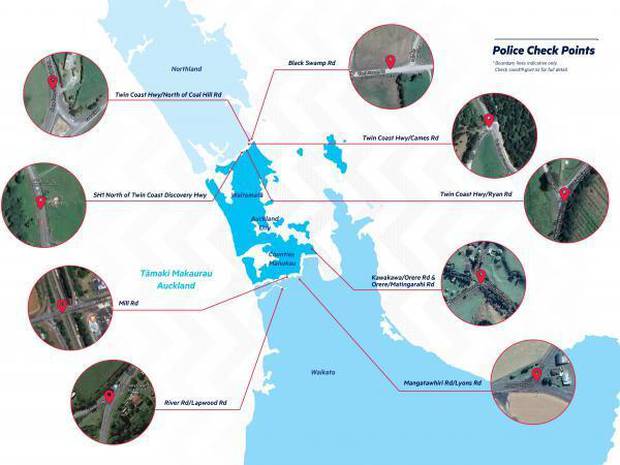 "We will be visible around supermarkets and places where communities need the assurance of Police presence.

"From midday, Police will also be operating nine checkpoints at exit points just inside the regional boundaries, largely based on the Auckland Super City boundaries," Coster said.

"We will be stopping vehicles and questioning drivers, but as has been our approach through the COVID-19 response, our first focus will be on educating people and ensuring they are aware of the new restrictions.

Coster said the Defence Force could also be used to staff the checkpoints.

"For the rest of the country, this is not new territory for people and hopefully there is a strong community willingness to abide by the restrictions of Alert Level 2."

Coster said he was aware of "isolated" issues involving queues at supermarkets this morning.

The Defence Force was able to provide "immediate" assistance to police.

Forty police staff would be based at the nine Auckland checkpoints

When PM and Bloomfield found out about new cases

There is no lockdown in Rotorua because everything at this stage points to the source of infection being in Auckland, Prime Minister Jacinda Ardern said.

Ardern said they had released the information quickly and there was "no reason why we would ever" keep it under wraps.

"I do worry that those kind of theories do nothing to support what needs to be collective action by all of us."

Authorities needed to have a certain amount of information to inform the decision of moving Auckland into alert level 3, Bloomfield said.

Bloomfield was texted about the cases at 2.40pm yesterday. He called the Counties Manakau DHB chief executive about 2.45pm and they had a zoom meeting about seven minutes later, he said.

As soon as the person tested positive at 2.30pm, the person and everyone around them went into isolation, the PM said. Contact tracing began immediately.

Ardern and Bloomfield reiterated the timeline of when they were told of the positive test result yesterday afternoon before the announcement of lockdown at 9.15pm last night. 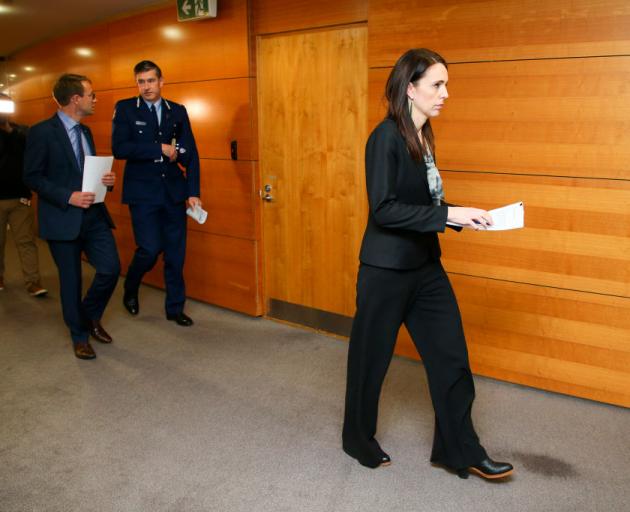 No decision on whether election will be put off

Parliament was due to dissolve today at 11am but had been deferred to Monday.

Options around the election were being explored and no decisions had  been made about whether it will be delayed or not.

The election could still be held on September 19 and it can be held under alert level 2. The date could be moved to any date before the 21st of November. Things got complicated if it needed to be pushed further out than November 21.

Covid would continue to exist within the world for the foreseeable future, Ardern said, and other countries have had to navigate elections in a Covid world.

One hundred and thirty people who work with the man who tested positive in a finance company are considered close contacts.

Three of the husband's contacts are symptomatic and isolating at home.

"None of the workplaces where there is a risk are public-facing," he said.

One hundred and forty people are standing by to support Auckland Regional Public Health with contact tracing. Healthline is very busy and has additional staff on, he said.

Tens of thousands of people are expected to be tested over the coming days.

Bloomfield said the public health department wanted to see if the environment of the workplaces contributed in any way to any spread of the virus.

"The best thing we can all do now is face this together ... to comply with key public health messages ... and we are also recommending the use of masks, particularly in Auckland," he said

"We have seen in other countries and jurisdictions where a resurgence occurs that it is incredibly important to act early," Bloomfield said

The fact the family visited Rotorua reinforces why the whole country has moved to alert level 2, Ardern said.

When to get a test - PM's plea

"If you have any symptoms then do get tested. But, if you have no symptoms and you don't work in [managed isolation facilities] or at the border and you're perfectly healthy then don't."

Extra precautions are needed to look after elderly Kiwis so all aged care facilities will close their doors, she said.

"i realise how incredibly difficult this will be for people who have loved ones living in these facilities," Ardern said.

Cover up - when to wear a mask

"If you are in Auckland please cover your face if you leave your home," Ardern said.

Countdown and Foodstuffs have supply. 5 million of the Government's general supply is being distributed across the country as well.

If your supermarket doesn't have any available you can fashion your own at home.

Masks must be worn on flights leaving Auckland. That is only place masks are mandatory.