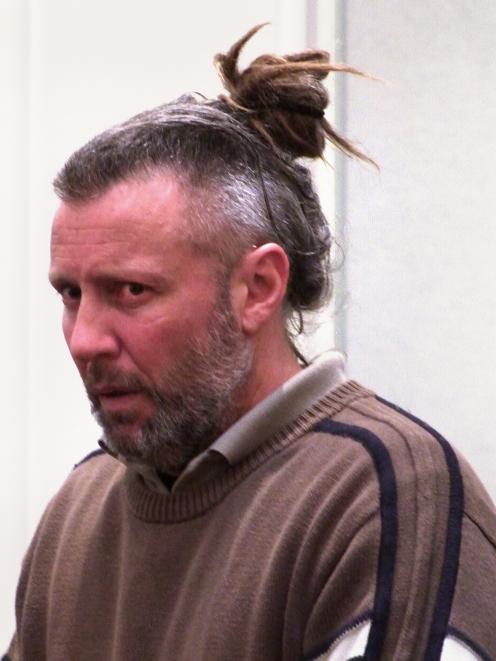 Cory Ferguson (43) is the first person on trial in New Zealand since the Covid-19 lockdown. PHOTO: ROB KIDD
A man allegedly broke into a Karitane home and beat the resident with a softball bat, leaving him with fractures from head to foot, a court has heard.

Cory John Wayne Ferguson (43) is on trial before the Dunedin District Court after pleading not guilty to wounding with intent to do grievous bodily harm, aggravated burglary, choking and two counts of assault in a family relationship.

Crown prosecutor Richard Smith said the male victim — whose name is suppressed — had lacerations to his head and bruises covering his body following the incident on October 19 last year.

X-rays showed the man had fractures to his foot, kneecap, cheek, eye socket, nose, jaw and a bone in base of his skull.

But defence counsel John Westgate said it was not a simple case of Ferguson breaking into a home and dishing out a jealous beating.

"When you start listening carefully and without emotion and without prejudging this, I suggest you’ll start to see a very different picture," he said.

"There was an altercation but this man was defending himself ... he essentially had no choice."

Ferguson’s partner — who has interim name suppression — told the court the defendant was drinking cider at lunchtime at the couple’s South Dunedin home and they argued about her perceived dishonesty regarding her ties to a Karitane man.

She told the jury Ferguson tipped her off a chair in the backyard then grabbed her by the throat as the stoush continued inside the house.

"I just remember being really claustrophobic," she said.

She said Ferguson berated her about living by his rules.

Suggestions from Mr Westgate that she exaggerated the extent of the altercation were denied.

Despite the earlier episode, the court heard the pair continued with their plan to drive, in a truck borrowed from friends, to Karitane.

But the woman said tensions flared again on the journey.

She told the jury Ferguson hit her in the face with the back of his hand a few times.

While it was "annoying" rather than painful, the witness said she reacted by braking too hard and the vehicle rolled and ended up on its side in a ditch.

The pair got a lift from a passing motorist to the old Cherry Farm site where they tried to phone for assistance.

The woman said tempers continued to run hot after Ferguson hit her in the chin with her phone.

She decided to walk the rest of the way to Karitane, while her partner remained.

Once there, she said she told the man about what had occurred and he went to take photos of the visible injuries to her neck.

But before that happened, they heard a glass panel on the front door smash.

Outside, she said she heard "two whacking noises" and raised voices but saw none of the violence that ensued.

Her 27-minute phone call to police was played for the jury yesterday in which she repeatedly whispered at them to "please hurry", while she hid in the garden.

He denied being at the scene, denied the offending but admitted feelings of hostility towards the male victim.

The trial, before Judge Michael Crosbie and a jury of eight women and four men, is set to last three to four days.