Suspected Omicron cases: 'Fortunate' Covid guest did nothing but check out 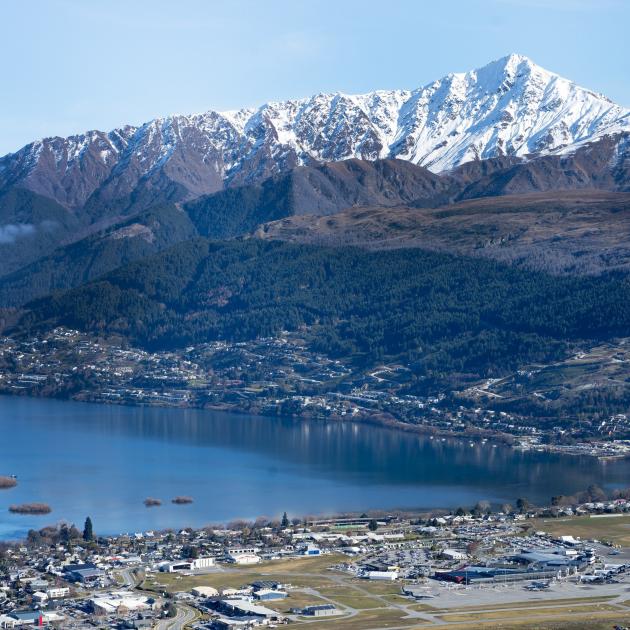 Queenstown Airport (bottom) is a location of interest. Photo: ODT files
Two locations of interest in Queenstown have been linked to suspected Omicron cases.

The locations are Queenstown Airport on Saturday (January 22) from 2.15pm-3pm.

People who were at either place during the affected times are told to self-monitor for Covid symptoms for 10 days after being exposed and if symptoms start to show, get tested and stay home until a negative test result returns.

Hotel St Moritz Queenstown general manager Jo Finnigan said the Covid-positive guest was considered infectious only on the last day of their stay, on Saturday (Jan 22), from 12am to noon.

‘‘Very fortunately, this guest did nothing on the 22nd but walk down the corridor, catch the elevator and check out," Ms Finnigan said.

‘‘Our best understanding of their movements was that it was about a 15-minute window.’’

‘‘The advice is that we monitor our symptoms and that we get tested if we have any symptoms.

‘‘We are a fully-vaccinated Fort Knox here, and therefore we’re all mask wearing, and of course we have very strict cleaning and sanitation protocols.

Although the potential exposure was brief, ‘‘we’re all very conscious of how this might play out, so it’s a good reminder’’.

Queenstown Lakes District mayor Jim Boult says he is "not surprised" new locations of interest have been announced in Queenstown.

"Sooner or later we are going to have folk here who end up in our community with Omicron," Mr Boult said.

"At this stage the DHB advise me they are only places of interest and clearly they're watching."

He said that he was aware testing numbers in the resort were "reasonably low" and encouraged anyone who was near those places of interest and had "any signs of any illness at all" to get a test "really quickly" and self-isolate.

He said he had been told by Southern District Health Board chief executive Chris Fleming that he would be contacted as soon as there was a community case in Queenstown to report.

In the meantime Mr Boult urged people to practice good hygiene, wear a good mask "some of the cloth masks aren't particularly effective" and use the Covid tracer app "constantly".

"Follow the public health guidance. When out of your house wear a mask, scan the QR codes, practice good hand hygiene, and practise social distancing.

"If you were at any of the locations of interest at the date and time listed, and you are symptomatic please get tested and remain at home until you receive a negative test result."

The SDHB yesterday encouraged all eligible people to get their boosters now.

Dr Jack said it took about two weeks for the body to build protection against Covid-19 after the vaccination.

About 65% of eligible people in the district had received their booster shot, she said.