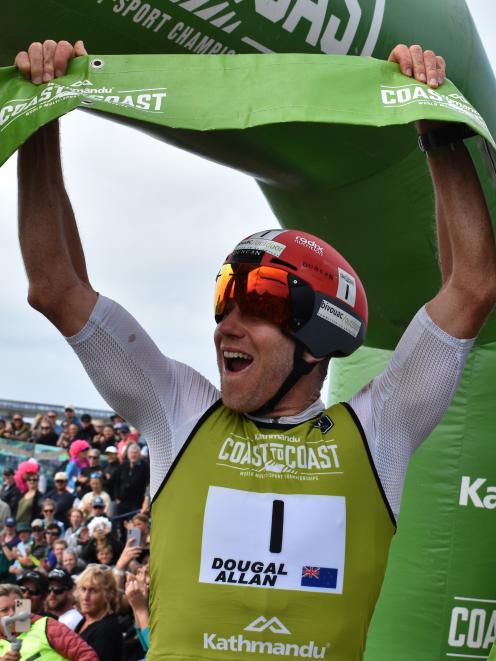 Dougal Allan celebrates his win in the men’s Longest Day section of the Coast to Coast, at New Brighton Beach in Christchurch yesterday. Photo: Wayne Parsons
Before breaking the tape, an emotional Dougal Allan briefly halted his progress in the finishing chute, brushed aside a tear and pumped his fists to the sky in triumph at winning his second Longest Day title at the Coast to Coast on Saturday.

For the 35-year-old, it was a moment to treasure after failing to successfully defend the title last year. .

It took the Wanaka competitor 10 hours before he could be certain of nailing down the title for a second time after Sam Manson (Christchurch) took control of the race from the start.

No-one can remember the last time someone from Christchurch won the Longest Day title in the event’s 40-year history, but Manson aimed to change that and made his intentions clear from the start.

He played a huge role in setting the pace up front with Allan and fellow Cantabrians Steve Melton, Ryan Kiesanowski and Carl Bevins. Both Kiesanowski and Bevins overcame pain barriers while competing with a broken toe.

Bevins established the record time for the 55km bike stage to Aikens in 2011 of 1hr 38min 4sec, and his effort was an indicator of the no-nonsense approach being taken up front in the early stages.

Manson took control in the latter stages of the first ride and built up a lead of more than 6min on the 33km alpine run. 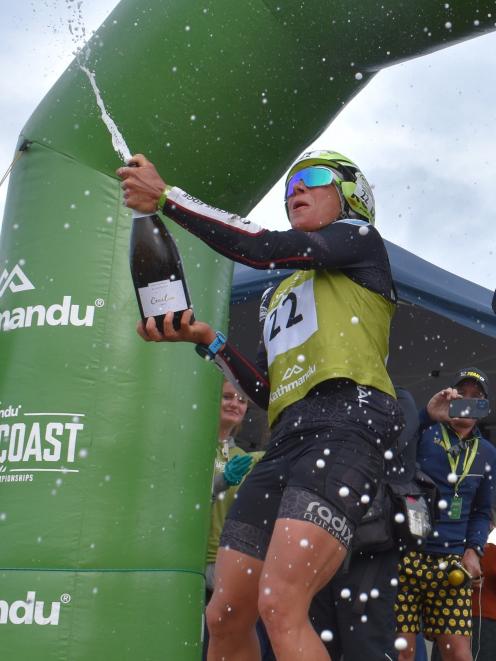 Simone Maier celebrates her win.
In the final stages of the run Allan made his move and set off in pursuit of Manson.

Allan made some significant inroads into Manson's lead, trailing by just 2min 40sec heading into the long ride to the finish.

In a display of phenomenal bike speed, Allan overtook Manson about 30km into the 70km bike from the Waimakariri Gorge bridge to the finish at New Brighton.

South Eyre Rd, New Zealand's longest straight stretch of road at 26km, gave him the opportunity to put the hammer down and secure victory to break the tape at New Brighton in 11hr 9min 52sec.

“I think I'm getting older, because I'm getting a bit emotional now,” Allan said, while holding back tears.

“I spent 10 hours today fighting off doubts and that's all because Sam Manson just put up a massive fight. He definitely had me doubting that I could get across the line.

"But I managed to keep believing, thanks mainly to my crew. They kept me in the right head space and it was mixed feelings going past Sam.

"I was excited to be taking the lead, but I love Sam Manson like a brother. We race together. We race against each other. And I could just sense just how much he put into it today.

“Make no mistake I'm thrilled, but I'm feeling a bit for Sam.”

Allan said he had a few pre-race plans in mind but none of them was Manson breaking away so early in the piece and forcing him to “hit the go button” coming off the mountain.

“I got off the water pretty fired up,” he said of halving the deficit between him and Manson.

After being deadlocked on the first day, Rob Lord and Richard Greer continued their epic battle into the second day of the two-day individual race for men and only 6sec separated the pair at the finish, Lord clinching the honours in 12hr 20min 20sec.