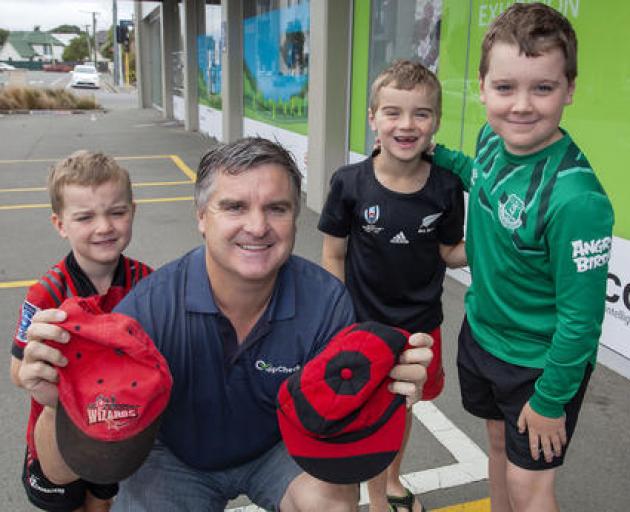 Former Canterbury wicketkeeper Paul Rugg with his two caps and three boys (from left) Spencer, Andy and Austin. Photo: Geoff Sloan
Short of promotion to the Black Caps, celebrating a title or playing a match-winning hand, receiving a provincial cap can be a career highlight for a first class cricketer.
So Paul Rugg, who has two State Championship games for Canterbury on his record, was bowled when he was belatedly presented with the red and black hooped headwear, 16 years after he played.
The 42-year-old filled in behind the stumps when Brendon McCullum and Michael Papps were on test duty against South Africa in early 2004, but Rugg was not presented with his Canterbury cap until this season.
In a fitting gesture it was handed over by current men’s coach Peter Fulton, who played alongside Rugg when Canterbury played four-day matches against Central Districts in Rangiora and Otago at Alexandra.
A supply shortage meant Rugg, who still plays for Weedons in the Canterbury Country premier grade, had to settle for a baseball-style cap issued to the Wizards one-day side.
Rugg duly kept it as a reminder of a fleeting first class career that spanned just 10 days, though now it has been usurped by a more precious memento.
“At the time it didn’t matter too much to me, I was just pretty stoked to be selected for Canterbury. I’d worked pretty hard to get there,” he said.
“Then over time you think ‘it would have been nice to have it and wear it in a game’.”
Rugg was next in line when Papps, McCullum’s deputy behind the stumps, was selected to debut as an opener. 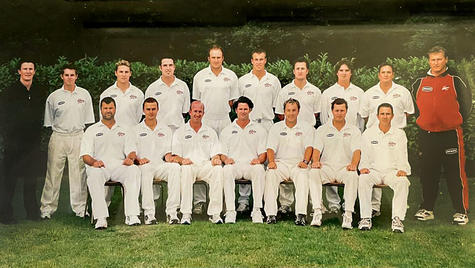 Crack Canterbury squad:- Back row: Brett Warman (manager/physio), Michael Papps, Brendon McCullum, Shanan Stewart, Peter Fulton, Brendan Donkers, Neil Broom, Paul Rugg, Stephen Cunis, Michael Sharpe (coach). Front row: Warren Wisneski, Chris Martin, Chris Harris, Chris Cairns (captain) Craig McMillan, Paul Wiseman, Gary Stead. Photo: Supplied
Although frustrated not to have played more often, a glimpse at the team photo illustrates just how many quality players were in that squad - only Rugg, Brendon Donkers and Stephen Cunis did not represent New Zealand at the highest level.
Rugg said the company he kept, albeit briefly, was his fondest memory.
“Playing with Chris Harris ... he was just a legend of Canterbury and New Zealand cricket. That team also had Chris Martin, Paul Wiseman, Peter Fulton. It was just an awesome experience to be part of it.”
The cap presentation was driven by Fulton, a fellow country cricketer.
“With him becoming coach he probably thought it was a good opportunity to show the rest of the guys how special it is, whether you play one or two games or a hundred,” said Rugg, who is also chairman of the Weedons club.
“It was quite an honour, especially to get it in front of the current squad.” 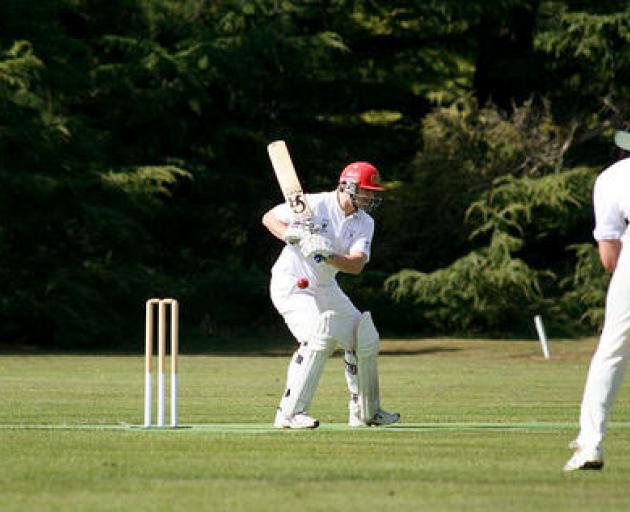 Weedon cricket club chairman Paul Rugg still turns out for the premier grade side, when required. Photo: Supplied
Rugg was rapt his boys Austin (9), Andy (7) and Spencer (5) witnessed the occasion.
“It was pretty cool. They got to talk to Tom Latham and Henry Nicholls. Henry Shipley and Will Williams are country boys as well,” he said.
*Paul Rugg made 28 runs in three innings at 9.33 and took seven catches for Canterbury in the summer of 2003-04.
The Star