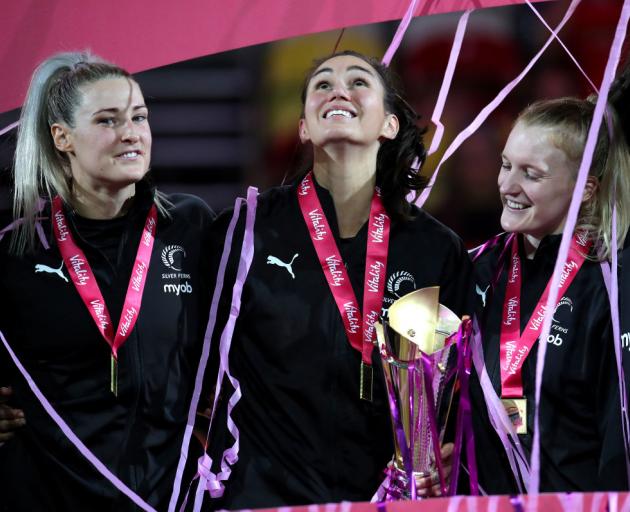 The 67-56 victory at London's Copper Box Arena proved much tougher than many might have expected.

In stark contrast to their three previous matches at this tournament, Jamaica dragged the Ferns into deep waters at times in the tournament final.

Only in the second half, after Noeline Taurua injected rookie centre Kimiora Poi and wing attack Whitney Souness, did the Ferns regain the march on the combative Jamaicans.

The scoreline says otherwise but this youthful Ferns squad, missing Laura Langman, Katrina Rore and adjusting to life without the retired Maria Folau and Casey Kopua, survived their greatest test of character to date.

And on this evidence, the future looks bright for the world champions.

Where New Zealand enjoyed complete dominance in comfortable victories over England, South Africa and Jamaica, who they beat by 26 goals in Birmingham last Thursday, this time the pressure gauge told a very different story.

This is exactly the sort of battle that revealed everything about the temperament of Taurua's emerging squad.

Once again, as she has throughout the tournament, Maia Wilson impressed at the shooting end with her poise proving pivotal on her way to nailing 44 from 47.

So, too, will this be a huge confidence boost for Poi, the 22-year-old Tactix centre proving she can thrive on the big stage. Just yesterday she played her first full international against South Africa.

Overall, having completed an unbeaten tournament, Taurua's squad have well exceeded expectations. In many ways this was a development tour for all involved but with Langman and Rore to comeback, there now promises to be intense internal competition.

Taurua reverted to her favoured starting line-up and they initially repaid faith by starting with purpose.

It didn't last, however. The Ferns lost accuracy in their attacking connections with several loose passes missing their targets and, suddenly, Jamaica drew level.

Ameliaranne Ekenasio stepped up to nail the final shot that gave her side a 16-15 first quarter advantage but the nerves then began to set in.

Jamaica continued their rhythm in the second quarter as long bombs into Fowler dropped which pushed the Sunshine Girls out to a two-goal lead.

Down on troops, with shooter Bailey Mes nursing her injured knee and defender Michaela Sokolich-Beatson returning home for Achilles surgery, Taurua turned to her depleted squad to spark a comeback.

Speed through the midcourt was the favoured approach.

First Souness replaced Gina Crampton at wing attack and Taurua then showed immense faith in Poi by thrusting her to centre and pushing Shannon Saunders to wing defence with Burger moving to the bench.

Those changes worked, with the Ferns levelling the contest at 30-30 by halftime.

After the break Souness and Poi's speed through transition began to pay dividends as the Ferns pushed out to lead 49-41 by the end of the third quarter.

Taurua rotated regularly throughout this series but only when the Ferns established a 10-goal lead in the final period did she again ring the changes.