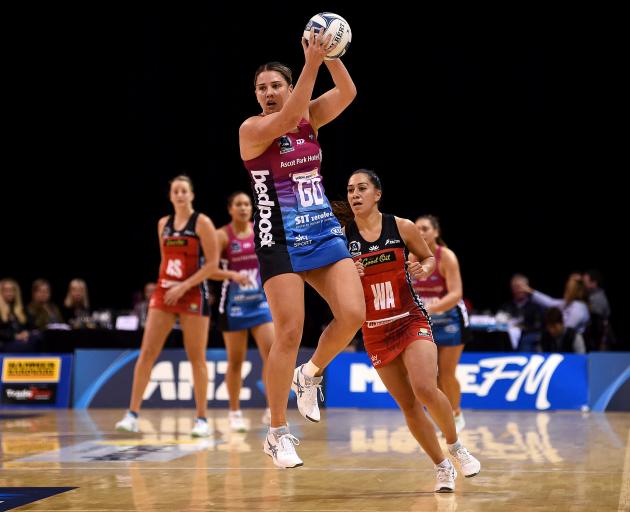 Te Huinga Reo Selby-Rickit, of the Southern Steel, has room to move during the round six ANZ Premiership match against the Mainland Tactix at ILT Stadium Southland in Invercargill last night. Photo: Getty Images
It was a spirited second half. But in the end the Southern Steel had left itself too much to do.

The side trailed the Mainland Tactix 30-21 late in the first half and ultimately went down 60-50 in Invercargill last night.

It was a reversal of the opening weekend result at the same venue.

This time it was a far more in-tune Tactix side the Steel came up against.

While last time it lacked intensity, this time there was no shortage of energy.

The defensive duo of Karin Burger and Jane Watson were disruptive all night, making it hard for the Steel to find its shooters.

Livewire midcourter Kimiora Poi was similarly influential, both in picking off passes and igniting the attack.

She fought back to finish with 42 from 49, although was slightly down on her best.

Her shooting partner, Tiana Metuarau, had a tough night, too, turning over a lot of ball against the swarming Tactix defensive duo.

Defensively, the Steel looked to be physical, although it found itself with cautions to three players, forcing several changes.

The Steel was effective in slowing down the Tactix, which did not capitalise on much of its turnover ball, but it was not enough to keep up with the Mainland side through the first half.

The Steel went behind straight away, when Watson grabbed the rebound from a Metuarau miss.

Ellie Bird, who was outstanding in shooting 46 from 48, scored down the other end before Te Paea Selby-Rickit made it 2-0.

The Steel pulled back to take the lead at 8-7, but a penalty on Shannon Saunders gave Selby-Rickit the chance to give the Tactix the lead back.

A poor second quarter followed and a run through the middle enabled the Tactix to extend its lead to 26-19, then to 30-21.

That closed to 31-23 at halftime, after which the Steel began to hit back.

That made a difference as Heffernan picked up an intercept and ignited a Steel comeback.

Its attacking end began to look more connected and the gap soon closed to four goals, but it was unable to fully pull in the deficit.

Every time the Steel got close, the likes of Poi or Watson would come up with a turnover and allow the Tactix to hit back.

They got the score to 43-38 at the end of the third quarter, but again the same trend followed in the fourth quarter.

The Steel continued to go on mini-runs, but every time the Tactix stemmed the flow before the southern side got too close.

In Tauranga, the Northern Mystics beat the Magic 67-59.