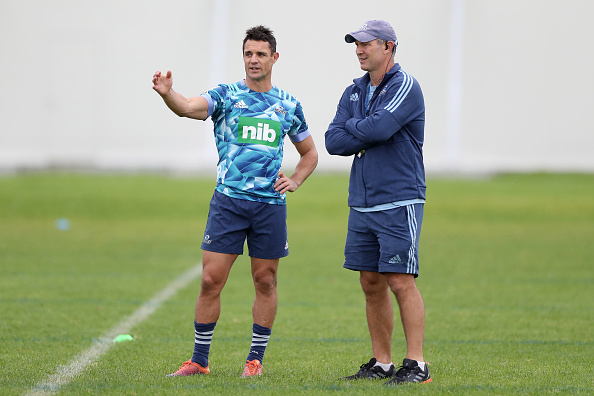 Dan Carter and Leon MacDonald. Photo: Getty Images
Dan Carter will not return for the Blues next season, despite coach Leon MacDonald's protestations, but could still feature for the Auckland franchise behind the scenes.

Carter signed for the Blues last season but didn't end up getting any playing time thanks to the Covid-enforced cancellation of the final Super Rugby Aotearoa clash against the Crusaders, where he was set to make his debut.

While there was never really an expectation that Carter would return as a player to the franchise, it didn't stop MacDonald from trying to persuade the 38-year-old to return once again.

MacDonald ultimately wasn't successful in his plea to the former All Black No 10, but remains hopeful of convincing him to help the Blues' playmakers next season in a non-playing capacity, especially with Beauden Barrett away on a short-term deal in Japan.

"I was pretty relentless with Dan," MacDonald said. "He would have been great because he would have given us that experience that we've lost with Beauden Barrett going around preparation. He's just down the road so I'm hoping we see him around even if it's just with the kickers having some sort of input."

Carter, 38, bowed out of international rugby after leading the All Blacks to victory at the 2015 Rugby World Cup.

The three-time World Rugby Player of the Year then spent three seasons in Paris with Racing 92 before joining the Kobelco Steelers in Japan in 2018.

However, the global pandemic put an early end to domestic rugby in Japan in 2020 and Carter decided to return to New Zealand to take up a role with the Blues in Super Rugby Aotearoa.

Carter said his role with the Blues was always more about coaching and mentorship as opposed to contributing as a player.

"It wasn't about me getting on the pitch," Carter Carter said in an interview with 66 Magazine last month.. "It was about helping the team grow and sharing my experience with the younger guys and the leadership group. I can't help myself though: I missed rugby."

If MacDonald gets his way, Carter could feature behind the scenes with the Blues once again but his playing future remains uncertain with international borders remaining closed.

Carter made three appearances for his boyhood club side Southbridge this year, which successfully defended its Ellesmere senior competition title with the superstar on board.

Meanwhile, the Blues announced their squad for Super Rugby Aotearoa 2021 this week, which includes 12 current or former All Blacks and two Samoa World Cup players in their 38-strong squad that comprises seven rookies.

However, as first reported by the Herald, the Blues have left one spot for an international test star who they are in talks with.