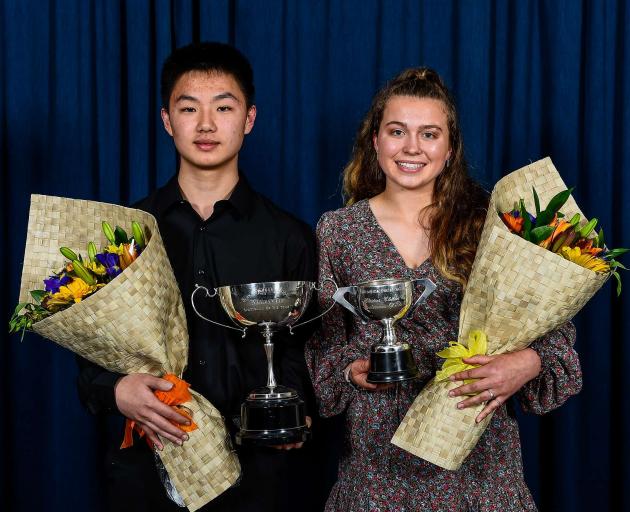 Sportsman of the year Sang-Yong Park and sportswoman of the year, Ellena Firth. Photo: Jon Davidson.
Table tennis players had a night to remember at the Burnside High School sports awards.

They took away two of the major awards, with Sang-Yong Park named sportsman of the year and the mixed A table tennis squad – made up Jiayl Zhou, Avon Liu and Sang-Yong – winning team of the year.

Footballer Ellena Firth was named sportswoman of the year, while Haley Grimes won the contribution to sport award for her efforts on the netball court during her time at the school.

Sang-Yong won his third straight New Zealand secondary schools’ teams table tennis title in September and finished second in the under-19 individual category. At the South Island age-group championships, he finished first in the under-18 singles, doubles and mixed doubles. He also competed at the Oceania junior championships in Tonga, where he was part of the boys team which claimed silver and also earned a mixed doubles bronze.

Ellena was captain of the Burnside High School first XI which won the Canterbury secondary schools’ title. She was also part of the national league-winning Mainland Pride side and the Coastal Spirit premier women’s team which reached the final of the New Zealand Cup knockout tournament.

Meanwhile, Haley’s netball season will start in February as an umpire for the netball trials and pre-season tournaments.

Over the past season, she coached a year 9 team which finished third in their division. Haley was the venue controller for the Wednesday netball competition at the Burnside High School courts and was also in charge of four of the five games played each week during terms two and three. She umpired the Wednesday and Saturday netball teams and the senior A team in the SuperNet Reserve competition on Wednesday nights.