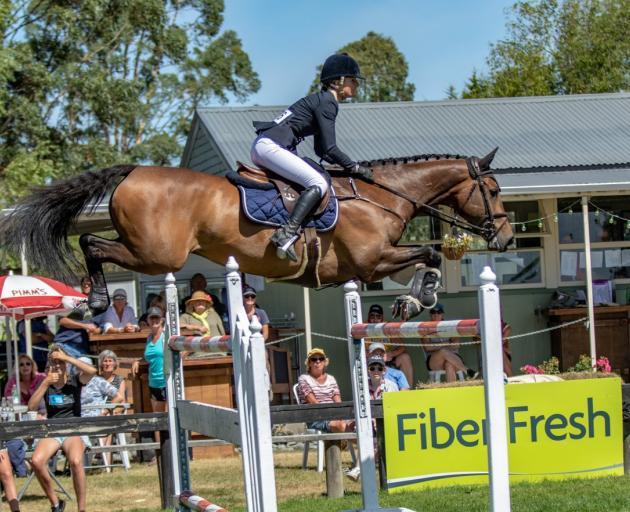 The championships will run until Sunday at Mcleans Island - and feature rising Canterbury star Tegan Fitzsimon on Windermere Cappuccino as she looks to defend the top title she won last year.

The pair have been competing in the North Island over the last three months, and took out the prestigious New Zealand World Cup series recently.

They are currently considered one of the top combinations in New Zealand, and Fitzsimon is the only NZ-based rider long-listed for the Tokyo Olympics in July/August. But for now, Fitzsimon said she and her horse are pleased to be back home in West Melton.

"The nationals will be a tough competition,” said Fitzsimon.

"The horses have to go well all show, and who knows (what) will happen, which makes for a great competition. We can’t predict anything.”

The national titles are decided after five rounds of jumping over the four-day show.

After living and competing in Europe, Queenstown’s Olivia Robertson is also back for the nationals. Her horse, Grandaire, has only competed once in Canterbury, when they won the Jump for Cancer event last year.

Kimberleigh McCabe will travel from Invercargill for the event. She has two horses entered in the show, including the talented Kace.

Two North Island riders will be targeting the pro-amateur class on Saturday. Larina Dolman, of Gisborne, currently leads the Harrison Lane Pro-Am series on Kiwi Lansing, so is keen to get some more points to extend her lead even further. Ex-jockey Katie Hercock is also bringing a team of horses from Hawke's Bay and will be competing on Whimsical WDS in the pro-am. Last year’s pro-am title winner is also back. Lauren Buckley and Icey Storm, of Queenstown, are very capable of winning the title again.

Wellingtonian Sophie Scott will also make the trip with her team of five horses. She is well placed to win yet another national title, and could potentially repeat her win from last year at the FMG Young Rider event on Lakota.

Francesca Covich will compete on two horses in the junior rider class against riders from Otago, Nelson and Marlborough. The local combinations, including Rosa Buist-Brown, Caitlin Adams, Margot Curtis and Sophie Townsend, also have excellent chances based on their recent form.

The finals will be held on Sunday.  One of the feature events in the main arena will be the Fiber Fresh National Pony Grand Prix. Back to defend her title will be Tai Tapu’s Sophie Geddes who took out the quinella last year, winning on Benrose Silver Shadow and finishing second on Te Ngaio Raggamuffin.

There will also be two sets of sisters competing in the class - Ella and Ruby Rae-Wood, of Greymouth, and Emma and Samantha Gillies, of Oamaru, have been frequently in the placings at the top South Island shows.

In the show hunter ring, Emily Cammock, of West Melton, was runner up in the Lone Goat Vineyard National Championships last year and is back to see if she can go one better.

The championships will be held at the National Equestrian Centre, McLeans Island. Entry will be free for spectators.