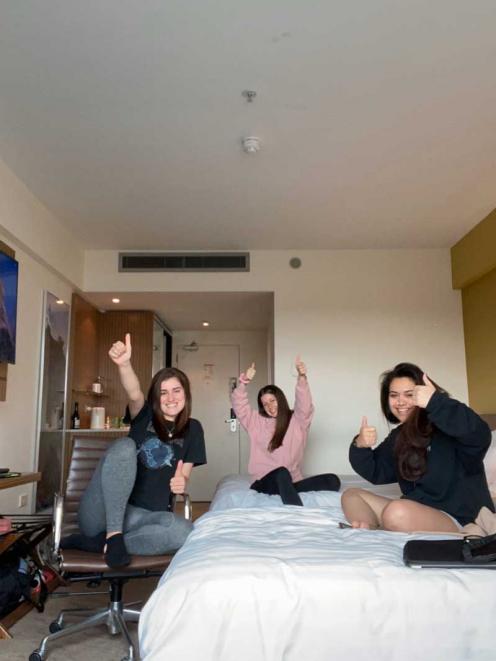 HOME SOIL: Olivia Leslie (middle) travelled back to NZ from the UK with her cousin, Emilee Hickey (left), and workmate Amanda Csengo and are now quarantined at an Auckland hotel for 14 days.
After being stranded in the United Kingdom for several weeks, Olivia Leslie is relieved to be back on home soil.

As borders around the world were gradually shut, the Christchurch 20-year-old was ready to come home after working at an Essex pub for about a year, but her plans were met with a string of flight cancellations in March due to Covid-19.

To be back in New Zealand was an “amazing feeling,” especially after weeks of stress and sorting out emergency accommodation overseas.

Ms Leslie is now quarantined at a Novotel hotel in Auckland, where she will remain until the level 4 lockdown ends, or for the mandatory 14 days of isolation, before she travels home to Christchurch. Ms Leslie is isolating with her cousin, Emilee Hickey, of Culverden, and workmate Amanda Csengo, of Auckland.

Upon arrival, the trio had their temperatures checked before they were escorted to the hotel by bus.

“Overall, after losing our jobs and having flight cancellations in the last month, being back in NZ is just a relief,” she said.

“The journey home was really easy and stress-free thanks to the staff at the airports, and it was nice to travel with my cousin and friend who were also working in the UK.”

The flights with Qatar Airways cost Ms Leslie about $1800. Since the planes were used to repatriate British citizens back to the UK from NZ, she was able to book a seat on the mostly empty plane into Auckland last week.

The atmosphere of the UK before Ms Leslie departed was “surreal.” Bustling streets were no more, even during the “amazing” weather the country had been experiencing in recent weeks.

Said Ms Leslie: “It was really quiet and eerie, I would describe it as surreal. Everywhere was so dead and people were in really sad moods.”

Although she was unable to reunite with her family for the time being, she was happy with the level of care they were receiving at the hotel which was paid for by the Government.

Said Ms Leslie: “It seems very organised and everyone is friendly - we get food brought to us every day; either a vegetarian or meat option and includes snacks, salads and fizzy drinks. The food portions are good sizes, so we don't get hungry.

"We're also able to walk around the hotel compound but checking in and out with reception.

“Hopefully, by the time my quarantine is over, so will the lockdown, so I can see my friends and family and finally feel at home.”

Yesterday, the Government announced repatriation flights for a large number of New Zealanders trapped in India.

Meanwhile, 70 Kiwis arrived in Auckland on Wednesday morning after being stranded in Peru.