A lucky save from a potentially devastating kitchen fire which broke out in a three-storey apartment block has prompted a warning for Canterbury residents.

Fire and Emergency New Zealand is running a nationwide campaign educating people on the risk of leaving cooking unattended, which has become “higher than ever” under the Covid-19 lockdown.

The message is being reinforced by Canterbury fire officers following an incident which happened at Airedale Courts, off Salisbury St, on Saturday about 10.30pm on Saturday. 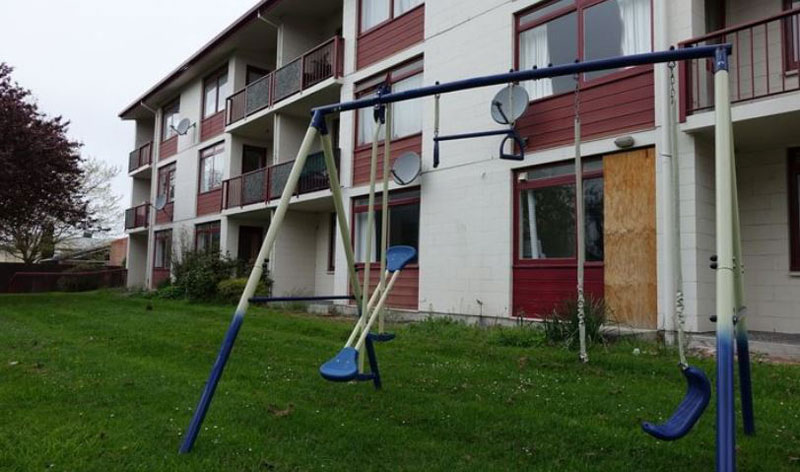 Sprinklers extinguished a kitchen fire at Airedale Courts, an apartment complex in Christchurch, before it had the chance to spread on Saturday night. PHOTO: RNZ

Fire fighters received reports of a sprinkler activation at the apartment complex, which is owned by the Christchurch City Council and managed by Otautahi Community Housing Trust. It houses about 150 occupants.

It was found to be set off by a kitchen fire on the bottom floor of one of the buildings, which started when a female resident walked away from a pot on the stove-top.

The woman tried to put it out using water which increased the intensity of the fire and caused smoke, triggering the sprinklers.

Christchurch City station officer Adam Milne said if it was not for the sprinkler system extinguishing the blaze, crews would have been looking at a “pretty significant structural fire” through the bottom floor.

“That [would have] created a whole lot of other problems, we would start getting issues up in the second floor spreading through other apartments.”

He said all residents evacuated the building until the building was safe to go back inside, however, due to water damage in the unit where the fire broke out, the woman had to be accommodated elsewhere for the night.

“Everyone complied with the evacuation and kept their social distancing, they were pretty good,” Mr Milne said.

FENZ senior fire risk management officer Bruce Irvine said the incident was one of a series of kitchen fires which have happened in Canterbury since the lockdown began on March 25.

He said they show how residential communities need to have a plan and respond to the plan when it comes to fighting fires and evacuation of the household, and calling 111 for emergencies.

When responding to a kitchen fire, he said people should cover it with a pot lid or a similar item and then with a fire blanket, turn the power or heat source off at the stove or meter and get out and call 111.

“Do not put water on a cooking fire. They are generally oil-based fires and water makes it worse.”

For more information on how to deal with a kitchen fire, visit: https://www.fireandemergency.nz/news-and-media/switch-off-before-you-walk-off/