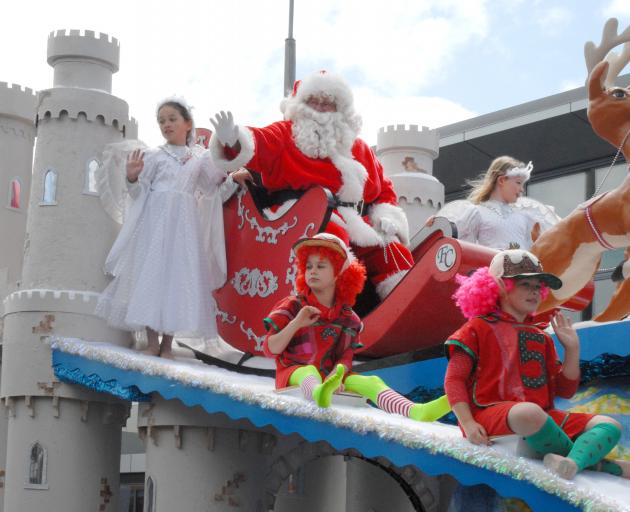 This year's Christchurch Santa Parade will cost $15 per person and be held indoors. Photo: Gilbert Wealleans
OPINION: Chances are, at some point in your life, you've been to and you have loved a Santa parade.

Most likely when you were a kid. But you may have also had the wonderful experience of taking your own children or grandchildren to the Santa parade.

You might have even been involved in one at some time yourself. Or your kids might have been.

Ours were quite a few years ago. On the back of a truck, snaking down the road in the blistering sun. And the brilliant thing about Santa parades is that anyone and everyone can go.

Because they're held out on the street - and anyone can rock up to them - it doesn't matter what part of town you live in or what the family budget is like, because they are a truly public event and it costs nothing to go.

Well, until now that is. Because things are about to change in Christchurch, with news that, after a two-year break, the Santa parade is coming back but, this time, it won't be free.

I should point out that there is apparently going to be a free show for charities and community groups. But that'll be a minority and the vast majority will have to pay $15 a head if they want to go. Ridiculous.

The Christchurch Santa Parade has been a bit of a hot potato over the past few years with Covid putting a dampener on things - but there have also been money issues with the city council cutting the funding it puts into it.

Health and safety requirements have also been a bit of a headache, as you can well imagine. It's lucky Santa has the sleigh, isn't it? Imagine the health and safety nightmare if he couldn't land on the roof? He wouldn't be allowed to use a ladder these days and he'd have to arrange to have scaffolding at every house in the country. It'd be a nightmare.

And I don't know what he's going to make of this new Christchurch parade. But I tell you what I make of it - I would rather there was no Santa parade, than have one that's only available for people who can afford to pay $15 a head.

You think things are tough financially now, think ahead to December when making ends meet gets even harder for so many people. Presents, holidays - the pressure to spend is immense. But at least there's been the old Santa parade where you can take the kids without it costing a bean, and everyone gets to enjoy a bit of pre-Christmas fun together

But not anymore. Instead, you're going to have to fork out $15 a ticket. And, if you can't afford that, then you won't be there.

And I'm picking a lot of people won't be there. If you've got three kids - it'll be $60 if you want to take them. That is not the kind of money people have lying around spare at Christmas.

And this is not me having a go at the guy who's taken over the running of the parade. Jason Reekers is his name. As he's saying in the news today, a lot of the floats have fallen into a state of disrepair and need some attention - and that all costs money. So I'm not having a go at him personally. But I think the idea of people paying $15 a head to go to a Santa parade is ludicrous.

It's going to be a concert - not a parade.

And where I think he's really over-thinking things, is what the kids themselves expect from a Santa parade. He's saying today that, in recent years, it's been as much about businesses promoting themselves as it has been about the traditional Christmas things.

And, sure, there have been times when I've gone along over the years and thought the same sort of thing. But I have never heard a young child come back from the Santa parade saying "it was all a bit too commercial". The kids don't give a damn about that.

But Jason Reekers is saying that this new parade is going to be next level.

"We are creating something really spectacular and new. It's still a city parade, but it's going up a step. We have gone down the more professional route."

Which all sounds great - but is it what the kids want? Of course it's not!

All they care about is the excitement, the noise, the crowds, the fire engines and seeing the big guy in the red suit at the end of it all. It is chaotic, it is rough-around-the-edges, some of the floats have been a bit dubious - but at least anyone and everyone has been able to go if they've wanted to, because it's been free.