New Brighton Community Gardens was bustling with people involved in the instalment of a cabin for artist Donald Gibson.

Earlier this year, the New Brighton Community Garden team, along with helpers, installed a kit-set cabin in the gardens for Gibson to continue his artwork.

Garden funding and administration manager Lin Klenner said it was the garden’s first opportunity to come together after Covid restrictions, describing the evening as “a night to remember".

The evening started with a welcome from the garden team followed by a speech from funder and Department of Internal Affairs community advisor Adam Parker, who said it was a first for Lotto to fund a project like this.

“The committee, while at first apprehensive, took a chance and have been very impressed with the outcome. In fact, it exceeded their expectations and they will look at similar projects more willingly now,” Klenner said. 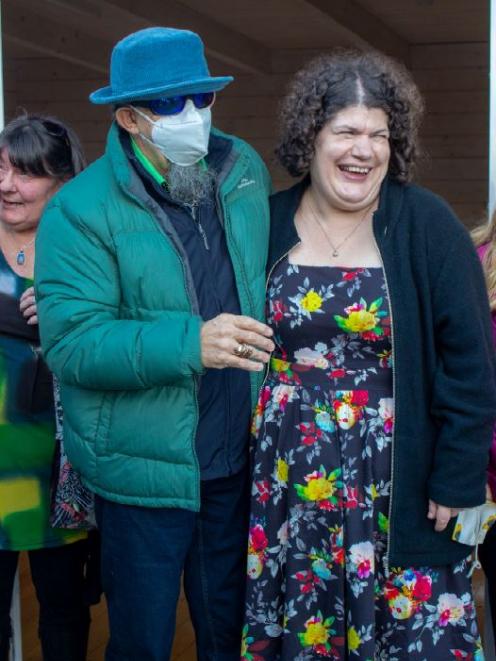 Donald Gibson and Lin Klenner, who said the opening of Donald’s cabin was a night to remember. PHOTO: ALEXANDER HORGAN
Klenner then spoke about the first time the garden team was approached by Gibson and his carer a year ago, after Gibson’s old studio at New Brighton School was set for demolition.

“New Brighton Community Gardens is in need of people defying the odds and showcasing anything is possible, a blind-and-deaf artist will teach us and our community exactly that,” Klenner said.

The gardens had just one week to move one of Gibson’s artworks from his former studio – a 600kg sculpture.

“The gardens was desperately ringing around to find someone to move the sculpture,” Klenner said.

“Stephen Pearce from Citycare answered the call ... and we managed to move the sculpture on the coldest day of the year.”

The event was invite only and included volunteers who had helped with the cabin, as well as Coastal Ward city councillor Celeste Donovan and Waitai Coastal-Burwood Community Board member Jo Zervos.

Klenner said Gibson expressed his gratitude to everyone for their help with his new studio through his interpreter before cutting the ribbon to the cabin.

“Donald’s sense of humour was truly coming through as he was signing a countdown from five down, everyone was counting with him to cut the ribbon,” she said.

“Donald is still in the process of setting up the space and getting a feel for it as well as orienting himself.

“He is currently working on the stone sculpture in our gardens, which has come along impressively,” Klenner said.