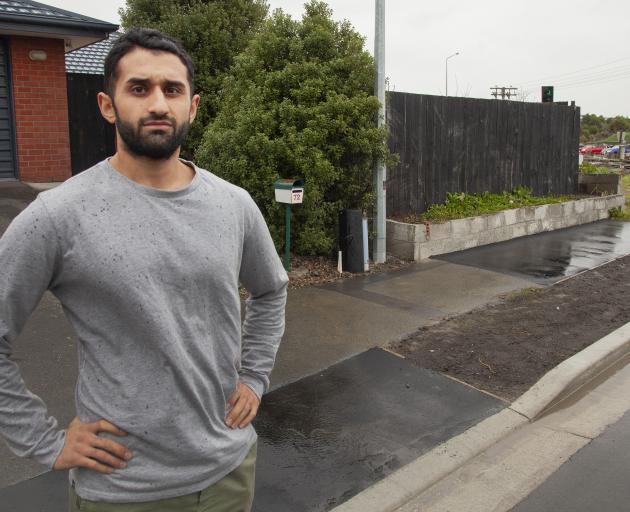 Sirwan Khalandi outside his Scruttons Rd house which he says has been damaged by roadworks. Photo: Geoff Sloan
Three homeowners in Heathcote Valley say their properties have been damaged by earthworks being carried out as part of a multi-million dollar wastewater project.

But contractor Fulton Hogan is “satisfied” it is not its fault.

It has been four months since residents on Scruttons Rd first reported experiencing “torturous” effects during phase four of the city council’s Lyttelton Harbour wastewater scheme.

Constant noise, dust, potholes, muddy roads and intense ground-shaking were among the negative impacts endured while Fulton Hogan worked to install a pipeline at a cost of $8.3 million.

Now residents are frustrated over damage to their homes which they claim did not exist before the project began.

Homeowner Sirwan Khalandi lives closest to where the work was carried out, he is waiting on engineers to be sent out by Fulton Hogan to examine damage to the floor in his kitchen and lounge.

It will be the second time his property has been assessed by the company after being told the first time that damage was unrelated to the project and it should be dealt with by his insurers.

Mr Khalandi got in touch with his insurers and is paying for a builder to evaluate the property so he can provide a full report.

Resident Sarah Gordon discovered a new crack in her patio after more than a month of roadworks with heavy machinery.

Although contractors are no longer working on Scruttons Rd, Ms Gordon said she still has to deal with her house shaking when trains go past because of drilling which was done under the railway line.

“We’re used to trains, but now when they rumble through my bed shakes. That never happened before,” Ms Gordon said.

A third resident Kate Exeter has noticed cracks up her driveway.

However, both Ms Gordon and Ms Exeter have been advised by Fulton Hogan to contact their insurers as the company is “satisfied [damage] has not been caused by the works.”

Said a Fulton Hogan spokesperson: “There has been regular communications with the residents concerned that works being carried out might potentially have caused damage to their homes.

“Fulton Hogan has investigated and had engineers examine the damage, and is satisfied it has not been caused by the works. The company is presently investigating one other resident’s concerns.’’

City council head of three waters and waste, Helen Beaumont said the issue was between residents and Fulton Hogan.

“We will be monitoring the issue to ensure that it is investigated and resolved.’’