Akaroa’s Gloria Calcutt is a force to be reckoned with.

Each week the diminutive 85-year-old heads out with her foster son Keith. They’re on a mission to check the recycling collection points at remote communities on Banks Peninsula.

Gloria used to drive herself, but when Keith got his heavy vehicle licence he took on the driving duties.

Together they search for incorrect items in the bins and pull them out so when the pickup trucks come there won’t be any contamination.

It’s all part of the service provided by Waste Line, the business owned by Gloria and her son Julian for the past 31 years.

Waste Line is a subcontractor on the city council contract to provide waste services to more than 15,000 Banks Peninsula households. 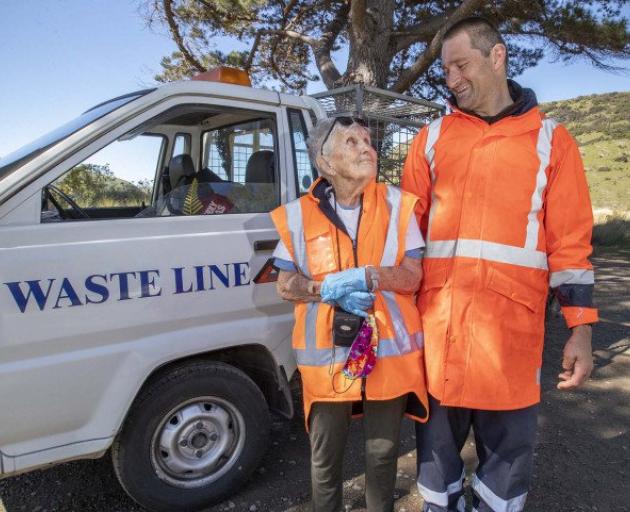 “Keith chats a lot,” says Gloria. “I love it, it’s very enjoyable. I like the beauty of it.”

It’s a chance for Keith to get any problems off his chest as Gloria lends a listening ear.

At the collection point the pair are all business, fishing out items that shouldn’t be there and recording them in Gloria’s notebook.

“We’re trying to do the right thing, make the product as acceptable as possible (for resale)”, she says.

People are often confused about what can be recycled.

“The things that they slip up on are soft plastic, lids and dirty containers– it could be at least an inch in a tomato sauce bottle that’s been put in here or a peanut butter jar that’s got half of it left. The other things are coffee cups and milk cartons. We can’t take silver foil or polystyrene either.”

She says when the city council first started recycling items were separated into open-top crates, which made it easier for people to sort and more obvious if the wrong materials were presented for recycling.

Nowadays people try to use the wheelie bins for ‘wish cycling’ – putting materials in the bin in the hope they get recycled. This can mean good recycling goes to landfill as it is contaminated by the wrong items.

“You might find one that’s very heavy and you check and find there’s a lump of concrete at the bottom!”

New signs are about to go up at the collection points, which will hopefully help spread the message about what can and can’t be recycled.

Four years ago, Keith came up with the idea of collecting old whiteware and cars for scrap metal – with all proceeds going to the Akaroa Hospital rebuild.

Gloria was a midwife and matron at the hospital for many years and the hospital rebuild is close to her heart.

So far they’ve raised around $78,000 towards the cause, something they’re both proud of.

It’s as if the two parts of her working life have come full circle.