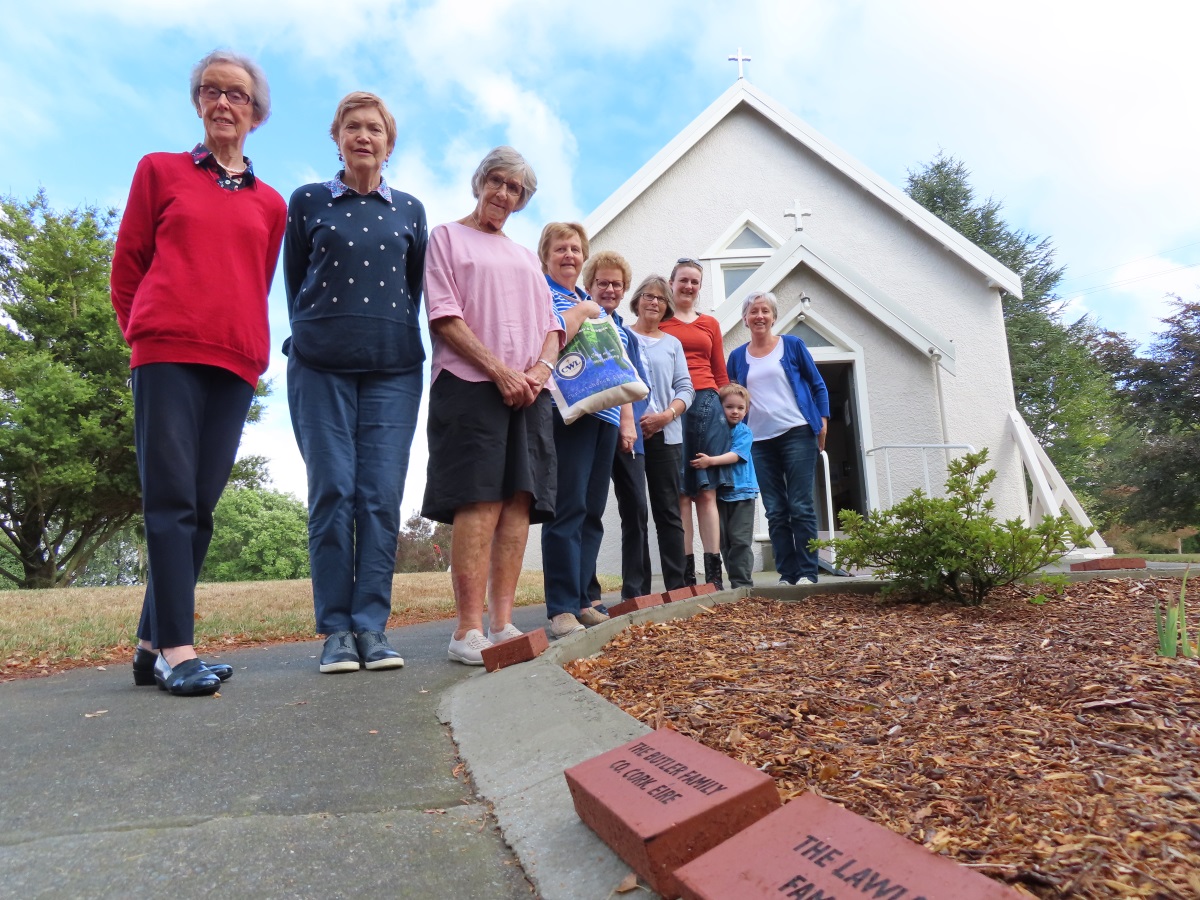 The women ensuring St Ita's history will not be lost include (from left) Monica Hanrahan, Kathleen Lawler, Joan Wells, Sylvia Mellish, Pam Dolan, Carmel Tyson, Helene Dolan and son Mathew, and Denise Ferris. Photo: Ashburton Courier
A group of Catholic women from Rakaia are ensuring the history of their church and school is not lost by creating a public memory walk using red bricks.

Anyone who has had any connection with St Ita’s church or went to its primary school, until it closed in 1985, is being encouraged to buy a brick and personalise a message on it. It’s a fundraiser that’s more about making connections than money.

The buy a brick campaign is the idea of Denise Ferris, who moved to Rakaia about eight years ago and is “still a newcomer”.

She has enjoyed listening to stories told at Catholic Women’s League meetings and connecting the dots between families in the town.

On a visit to Dunedin’s historic railway station she saw bricks used to tell the station’s story and could see something similar at St Ita’s.

The women’s league is now looking for people with current or past connections to the church or school to get in touch. For $50, they can buy a brick that will be fixed in concrete around a garden at the church’s front door.

Inside the church is a register containing a more detailed history of the brick-buyer and anyone can drop in to read it.

St Ita’s Catholic school in Rakaia operated from 1912 until 1985 and past pupils include Ashburton mayor Neil Brown and his siblings.

Sylvia Mellish was the first teacher at the school who was not a nun or priest and is in charge of writing up the histories of those buying the bricks.

She said people could choose to have their names or short messages on the red bricks. Some of the bricks already laid feature families with up to six generations connected to Rakaia.

Kathleen and John Lawler have their names on one brick, while another bears the name of the Butler family from Cork in Ireland; this is Kathleen’s family who came to visit over the years and worshipped at St Ita’s.

Sylvia said thousands of students had passed through the Catholic school and were making their way in the world. She is hoping some of them will get in touch to become part of the brick history.

One of the histories already written up is that of Maurice and Margaret O’Reilly, who married in 1905 and had 16 children, 13 of which went to the school.

Anyone with a connection to the church or school can buy a brick, and that includes those who were married or baptised in the church or who worshipped there regularly, or not so regularly.

Other families who have bought bricks so far include the Dolans, the Hanrahans and the Wells.

Mrs Ferris said members of the women’s league shared interesting stories over cups of tea about their lives and growing up in Rakaia.

“I love listening to these stories and making connections. It is like joining the dots … they are all connected to some thing or someone.”

People wanting to buy a brick and be part of St Ita’s history can email Joan Wells at jbw.rakaia@xtra.co.nz.