Call to clear out gravel from stream 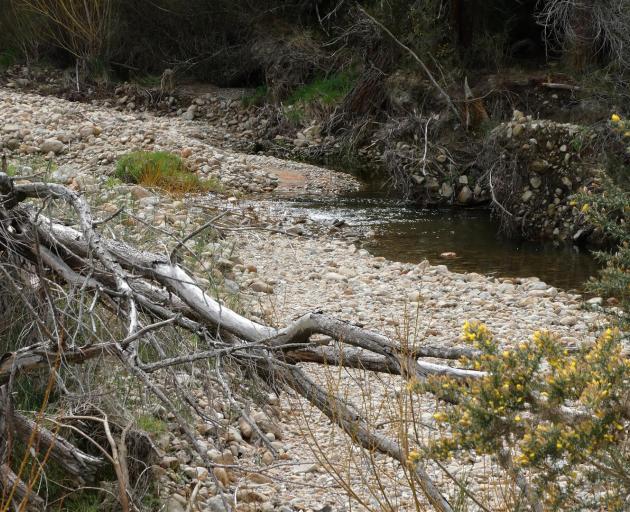 The shingle higher than the water in Cave Stream, which runs into Bowyers Stream near Staveley.
Staveley farmer Richard Bruce knows about rain.

He has seen storms fill creeks in minutes, sluice shingle down roads and lift streams over bridges.

Several streams near Staveley make their way into Bowyers Stream - Cave Stream, from near the Victory limeworks at Mt Somers, Stevenson Stream, and Reid Stream.

They join Bowyers Stream on the Mt Somers side of Staveley.

As the flood water cascades down the streams, it brings gravel - and it is that Mr Bruce would like cleared.

He reckons a contractor with a big machine could clear the shingle - lowering the creek bed - and straighten it in an hour or more.

Mr Bruce took his case to the Ashburton council earlier in the year, armed with photographs of the area.

Some work had been done, but Mr Bruce believes a bulldozer, if allowed, could "fix up 40 years of neglect''.

He said the streams that fed in to Bowyers Stream looked innocent enough, as did Bowyers Stream, but that could change in 20 minutes.

He said Mt Somers, which overlooks Staveley, was the highest mountain in the district and a natural storm centre.

Within a mile and a half, water could flood down streams and off paddocks.

That water made its way into Bowyers Stream and a flow meter showed it, at times, could match the flow of the Ashburton, though it had room to move.

Mr Bruce said the shingle build up, that one of the streams curved at right angles, made the situation worse.

If Cave Stream had been straightened "it wouldn't be a worry''.

Mr Bruce, who farms on hill country above Staveley, has lived in the area for more than 60 years.

The streams, he said, would continue to cause trouble.

Mr Bruce is full of praise, however, for road work in the area, particularly up Boyds Road, where the road had been built up.

The road, he said, had runnels, and a road that did not shed water was, in effect, a ditch.