Santa all set to go for Mid Canterbury Christmas parade 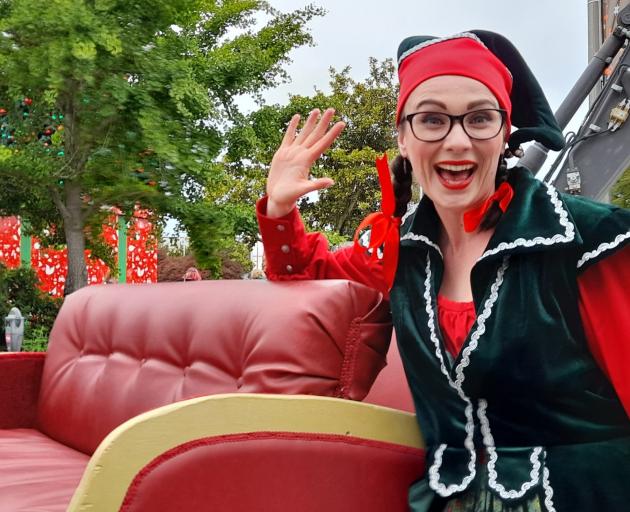 Tilly the Elf waits for Santa, the special guest in the parade on his sleigh this Saturday. PHOTO: TONI WILLIAMS
Christmas spirit will take over downtown Ashburton this weekend with more than 40 festive floats entered in the annual Hyundai Mid Canterbury Santa Parade on Saturday.

Special guest Santa Claus, in his specially made sleigh, along with his team of elves and fairies, will also make an appearance along with a variety of fun and famous characters, as well as scores of people and musical groups from within the community.

The event this year also has a new route, due to town centre revitalisation works. The parade will weave its way around the central business district as usual, starting from Mona Square at 12.30pm and moving along East Street, but then turning east into Havelock Street and then turning right into Cass Street back to Mona Square.

Parade organiser Carol Johns said the new family float competition had drawn 10 entries and those floats would be judged on the day with the winner to receive $500 for best entry.

There would also be lollies, balloons and chips handed out from 12.15pm so people were encouraged to get along nice and early.

Many volunteers have already offered to dress in some of the scores of costumes available for use during the day, but there is always room for more.

If anyone else wants to dressup in one of around 50 costumes available, they can contact Mrs Johns via the Ashburton Santa Parade Facebook page or email at johns.mmmm@xtra.co.nz or turn up at Mona Square at 11.30am on the day.

The streets will reopen once the parade moves through.