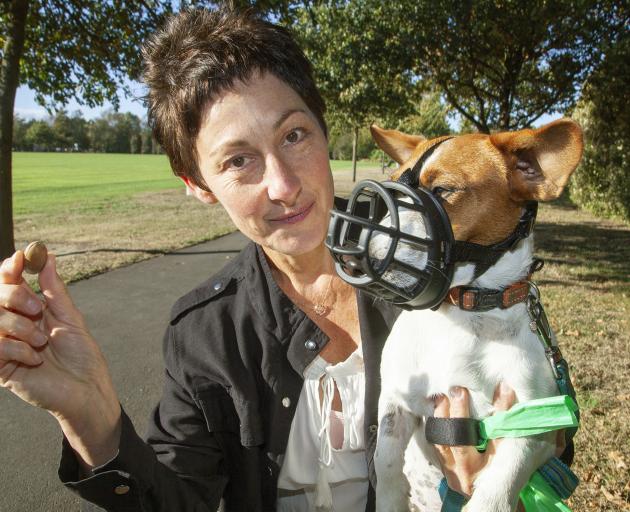 Belinda Jeursen and her jack russell Biggie. Photo: Geoff Sloan
Biggie the Canterbury jack russell is a little dog with a big appetite.

Over the past month he has survived eating a stone and then an acorn, with the help of expensive trips to the vet.

His owner Belinda Jeursen, of Prebbleton, is warning other owners about the dangers of acorns, ubiquitous in parks and reserves this time of year as they fall from oak trees.

Jeursen recently noticed her 10-month-old pup all of a sudden becoming sick – vomiting, shaking and drinking lots of water.

This was following surgery costing $2600 earlier in the month after he had swallowed a stone.

He had completely recovered from this, so the new illness was a mystery.

She took him back to the vet, who put him on a drip and X-rayed him.

The X-ray did not show any obstructions, however, when the vet undertook a rectal examination, she felt the acorn inside, Jeursen said.

Laxatives were deemed to be the best course of treatment. Soon Biggie was relieved of the acorn.

“We didn’t even know he had eaten it, it was only when it came out the other end we knew what it was,” Jeursen said.

Jeursen said she would be putting a muzzle on Biggie when she took him for walks from now on. She did not want him to eat any more acorns, nor any other strange objects.

The cost of the recent trip to the vet and associated medications had cost about $570. She had since signed up for pet insurance.

She said some dogs found acorns interesting and may be tempted to eat them.

“Acorns can be dangerous to our dogs, predominantly in two  ways,” Rozen said.

Firstly, they could cause physical obstruction of the bowel, resulting in severe clinical signs associated with the blockage. Surgery may be necessary to remove the blockage.

Secondly, acorns released toxins called tannins, which could cause  stomach upsets. This can present as vomiting, abdominal pain and diarrhoea.

“Kidney failure as a result of acorn ingestion is rare in the dog and is more commonly reported in cattle, sheep and horses,” Rozen said.

“We recommend that you do not encourage your dogs to play with acorns and that pets should always be monitored when they are out walking. If your dog becomes unwell after eating or playing with acorns please see your veterinarian  immediately.”