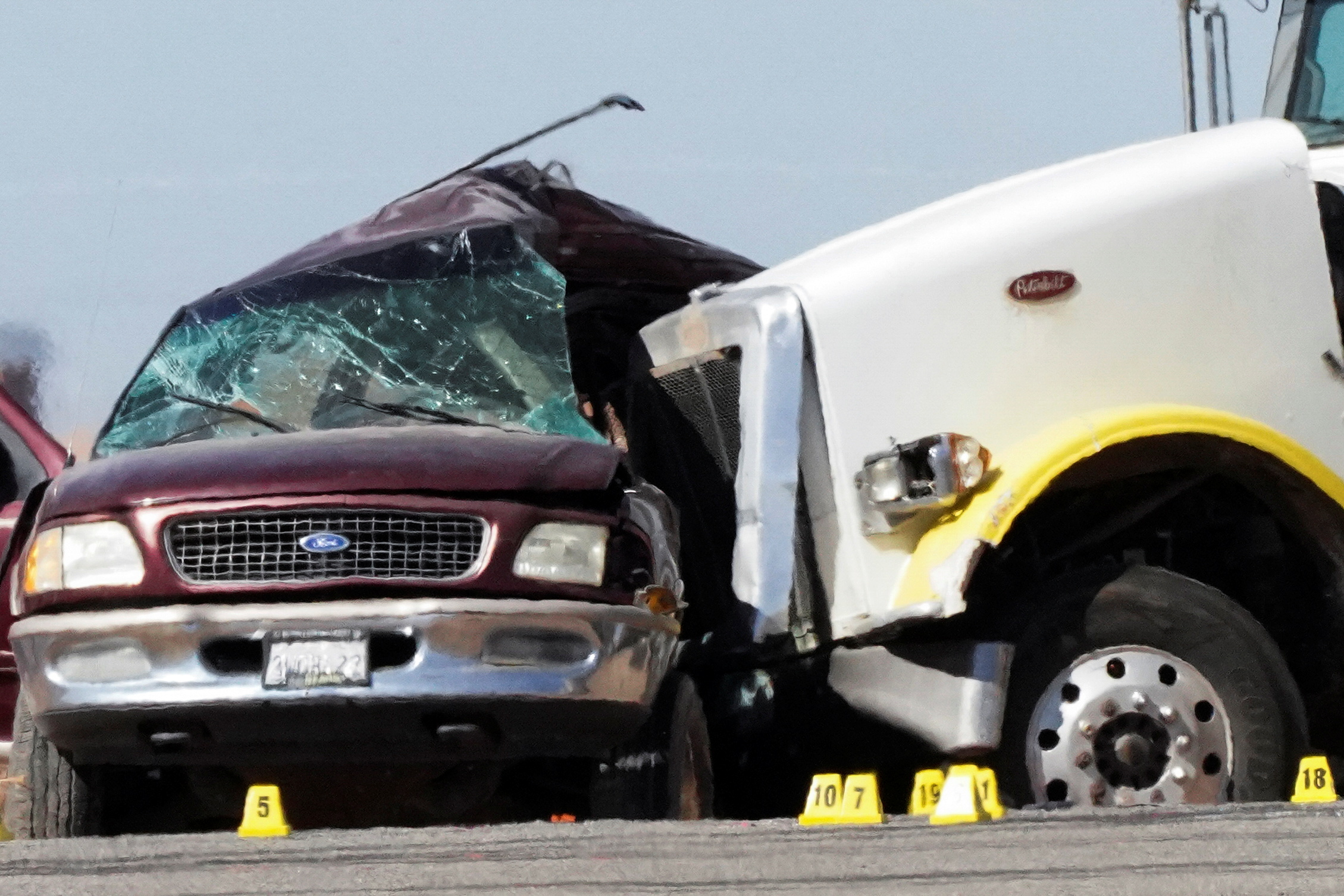 The entire driver's side of the smaller vehicle was caved in, and the passenger side was flung wide open. Photo: Reuters
At least 13 people, 10 of them Mexican nationals, were killed on Tuesday when a tractor-trailer slammed into an SUV crammed with 25 adults and children on a dusty Southern Californian road near the US-Mexico border, officials said.

United States Immigration and Customs Enforcement (ICE) agents opened an investigation into whether human smuggling was involved, an agency spokeswoman said in a statement hours later.

Handmade wooden crosses stretched in a line across a patch of dry grass and dirt by the roadside, and a seat covered in what appeared to be blood lay near the crumpled Ford Expedition, as the desolate highway through the farming community of Holtville remained closed Tuesday afternoon.

The white tractor-trailer cab with yellow trim was still smashed into the wrecked side of the maroon SUV. The entire driver's side of the smaller vehicle was caved in, and the passenger side was flung wide open.

"Unfortunately, consular staff have confirmed the death of 10 Mexicans so far," Roberto Velasco, the foreign ministry's director for North America, said in a tweet in Spanish.

Mexicans were also among the injured, he said.

It was not immediately clear how fast the vehicles were going, or whether the SUV had observed a stop sign before heading into the intersection of State Route 115 and Norrish Road just outside of Holtville, about 16km north of the border, the California Highway Patrol (CHP) said.

Those killed, who included the driver of the SUV, ranged in age from 15 to 53, and minors as young as 16 were injured, said Omar Watson, chief of the highway patrol's border division. He said the driver was 22 years old.

Several of the occupants were ejected from the vehicle and died on the pavement; others died inside the SUV, Watson said.

Most of the survivors are Spanish-speaking, a US Customs and Border Protection spokesperson said. Despite the presence of CBP agents and Spanish translators, Watson said it was too early to know whether the SUV's occupants were migrant workers or others who might have crossed from Mexico in the overcrowded vehicle.

Special agents from ICE's Homeland Security Investigations branch responded to the crash scene "and have initiated a human smuggling investigation," a spokeswoman said late on Tuesday. "The investigation is ongoing, and no further details are available at this time.”

Although it varies by trim and model year, the Ford Expedition typically is designed to hold five to eight people.

Watson said the CHP was working with the Mexican Consulate to determine who was in the vehicle and notify families.

A CBP spokesperson, who was not authorised to discuss the case publicly, said the agency was not in pursuit of or aware of the vehicle until after the crash.

The agency does not know and is not investigating the immigration status of the people at this time.

The driver of the tractor-trailer, which was earlier said to be hauling gravel but according to the CHP was not, was also hospitalized with moderate injuries, Watson said.

The logo of Havens and Sons Trucking of nearby El Centro was on the side of the truck cab. A person who answered the phone at the company told Reuters it had no comment at this time.

Several of the victims were taken to El Centro Regional Medical Center, the director of the hospital's emergency room, Judy Cruz, said in a news briefing posted on Facebook.

Agriculture drives the economy around Holtville and El Centro. Known as the Imperial Valley, the area is a big producer of fruits, vegetables, grain and cattle despite being desert, thanks to irrigation from the Colorado River and a long growing season.

Hospital officials had previously said that 27 people were in the SUV, and that 15 had died, but Watson said there were 25 passengers and 13 fatalities.

Three victims were flown to other hospitals and seven others were brought to El Centro. One person died at the hospital, Cruz said.