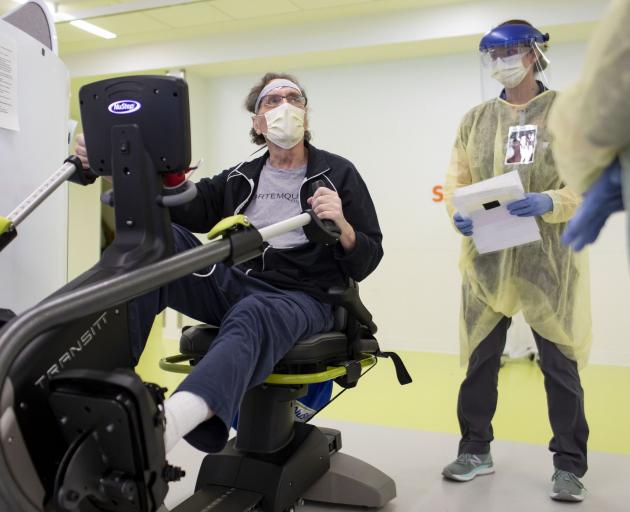 Gordon Quinn exercises with physical therapist Katie Palano on April 27, 2020, at the Shirley Ryan AbilityLab. Photo: Brian Cassella/Chicago Tribune/TNS
More than 1 million people around the world have been deemed recovered from the coronavirus, but beating the initial sickness may be just the first of many battles for those who have survived.

Small-scale studies conducted in Hong Kong and Wuhan, China, show that survivors grapple with poorer functioning in their lungs, heart and liver. And that may be the tip of the iceberg.

The coronavirus is now known to attack many parts of the body beyond the respiratory system, causing damage from the eyeballs to the toes, the gut to the kidneys. Patients' immune systems can go into overdrive to fight off the infection, compounding the damage done.

While researchers are only starting to track the long-term health of survivors, past epidemics caused by similar viruses show that the aftermath can last more than a decade.

According to one study, survivors of severe acute respiratory syndrome, or SARS, suffered lung infections, higher cholesterol levels and were falling sick more frequently than others for as long as 12 years after the epidemic coursed through Asia, killing almost 800 people.

SARS infected 8,000 people. With more than 4 million - and more every day - infected by the coronavirus, the long-term damage to health could strain social safety nets and health care infrastructures for years to come as well as have implications for economies and companies.

The prospect led Nicholas Hart, the British physician who treated Prime Minister Boris Johnson, to call the virus "this generation's polio" - a disease that could leave many marked by its scars and reshape global health care.

"What these chronic issues ultimately look like - and how many patients ultimately experience them - will have huge implications for patients, the doctors who treat them, and the health systems around them," said Kimberly Powers, an epidemiologist at the University of North Carolina at Chapel Hill, who is developing models on the virus's spread to inform public health efforts.

Hong Kong's hospital authority has been monitoring a group of COVID-19 patients for up to two months since they were released.

They found about half of the 20 survivors had lung function below the normal range, said Owen Tsang, the medical director of the infectious disease centre at Princess Margaret Hospital.

The diffusing capacity of their lungs - how well oxygen and carbon dioxide transfers between the lungs and blood - remained below healthy levels, Tsang observed. 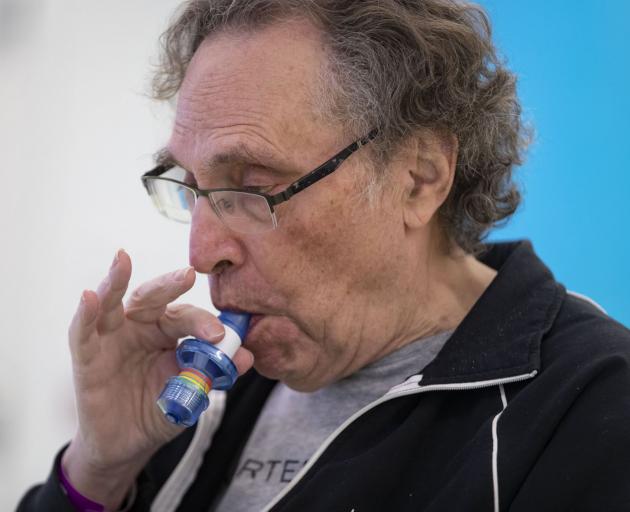 Gordon Quinn goes through therapy exercises with speech language pathologist Kate Webler at the Shirley Ryan AbilityLab. Photo: Chicago Tribune/TNS
A study of blood samples from 25 recovered patients in Wuhan, the city where the virus first emerged, found that they had not fully recovered normal functioning regardless of the severity of their coronavirus symptoms, according to a paper published April 7.

In another study, CT scans taken over a month of 90 Wuhan coronavirus patients found that of the 70 discharged from the hospital, 66 had mild to substantial residual lung abnormalities on their last CT scans, which showed ground-glass opacity, said a March paper published online in Radiology.

Chronic cardiac complications could arise in patients even after recovery as a result of persistent inflammation, according to an April 3 paper by doctors at the Cedars-Sinai Medical Center in Los Angeles. They based their analysis on patient data from Italy and China.

For clues on how COVID-19 may leave its mark, doctors and researchers are looking to the experience of SARS. Some survivors suffered long-term effects years after they first succumbed to the disease, which is part of the same family as the new coronavirus.

Researchers in China analysed 25 SARS patients 12 years after they contracted the virus, contrasting their results with a control group who were not infected with SARS.

The study found that more than half of the recovered patients suffered another lung infection since their bout with SARS and also had higher cholesterol levels. Additionally, half the patients had at least five colds in the previous year - a characteristic no one in the control group shared, said the 2017 paper published online in Scientific Reports.

"These data demonstrated that the recovered SARS patients had a poor quality of life 12 years following recovery, and were susceptible to inflammation, tumors, and glucose and lipid metabolic disorders," researchers wrote.

Doctors like Tsang at Hong Kong's Princess Margaret Hospital said looking at former SARS patients is potentially instructive. Among survivors of the SARS outbreak of 2003, chronic fatigue and impaired lung function have been found in follow-up studies after two to four years.

Tracking and figuring out how COVID-19 affects the body even after recovery could inform governments budgeting for social safety nets, doctors that see patients long term, and businesses as they set policies such as sick and disability leave.

These issues could be even more crucial as public health officials say there's a possibility the virus may become a seasonal affliction.

Economies and companies looking to get people back to work will need to understand how and if Covid-19 affects human health in the long run and its scope.

"There is such a wide range in the way the illness affects people. The various stakeholders need solid data to help them understand the breadth and duration of long term effects," said Jessica Justman, a professor of medicine in epidemiology at Columbia University.

There is some hope: Early intervention could play a role in longer-term outcomes of coronavirus patients, said Ivan Hung, a professor of medicine at the University of Hong Kong. Hung said in April that 90% of about 200 discharged patients he oversaw at a clinic at one of the city's hospitals appear to be making a full recovery a month out.

He attributed the success to Hong Kong's "early diagnosis and early treatment" of patients, which leaves the virus with less time to wreak havoc on the body.

This may not be possible in many countries like the United States and United Kingdom where testing is uneven and inadequate, and only those with serious symptoms are getting treatment.

Still, larger-scale studies in virus hot spots are needed to separate the physical legacy of the virus from how patients feel immediately after fighting off the infection. It will be crucial for scientists to track and quantify how Covid-19 affects such factors as oxygenation and breathing rate, said Roberto Bruzzone, a visiting professor at the University of Hong Kong, whose research focuses on cell biology.

Hospitals and researchers will have begun patient registries to start gathering data to study survivors over time as well.

"We need an epidemiological study that may be feasible in places like Wuhan, New York City, Milan or Paris - where there has been a huge group of infections with a wide variety of symptoms," Bruzzone said.