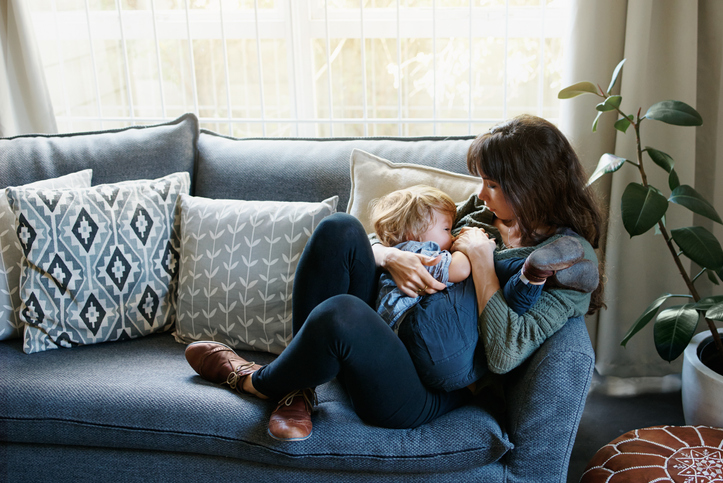 Gaëlle Meheut, who lives in Vanuatu, said when she fell pregnant with her first child, Ewan, she didn't have plans to breastfeed long term.

The 36-year-old said the average duration of breastfeeding in her native France is 17 weeks, but because there wasn't any hospitals or baby formula around, she continued to breastfeed and hasn't stopped since.

"My midwife whispered into my ear that some people were shocked when they knew 4-year-old children who were still breastfeeding and that she had breastfed her child until age four," she told The Sun.

"I only read about all the benefits of breastfeeding after having started my breastfeeding journey and I don't really have plans to stop as I hadn't planned it before."

Meheut also has a 3-year-old girl named Maia, who is also breastfed.

The 36-year-old has been breastfeeding for 5 years and 3 months in total.

The mum of two even practices tandem feeding, which she claims strengths the siblings' bond.

She says feeding Ewan is more about comfort and soothing rather than supplying him with food.

"I'm still aiming for natural weaning, big baby is five, and even if it is not always a smooth path, sometimes I end up being the mad mum with crazy kids stuck on the boobs. I love our relationship and our breastfeeding moments.

"It's not about feeding now but comfort when the children are hurt, upset, sad or cuddles in the morning."

Despite her loving bond with her children, Meheut has been received a lot of backlash for her decision to continue to breastfeed, with a number of people claiming it's sexual abuse and even incest.

"When the oldest is being breastfed, people are amused, surprised, laugh and really look at me but they aren't disgusted like people could be in Western countries.

"I think in France, if you breastfeed a kid older than 1-year-old, people are pretty shocked and disgusted.

"I've had inappropriate comments from drunk friends in France which was pretty gross when Ewen was 2 and my youngest just born such as, 'Oh lucky him, I would like to do the same.' One even apologised afterwards.

"Misconceptions people believe and say and that I should cut the cord, it's incest, sexual abuse, and that they have to eat real food, which they do, started at six months old with baby lead weaning.

"The reaction on Instagram is almost always positive. I received one comment genuinely asking about if it was sexual abuse on a post with me and my 5-year-old."

She hopes her move to continue to breastfeed her children will normalise the practice and help women feel empowered to choose their own path for their children and their health.

"It's OK to breastfeed – it's the best way to soothe your kids and it's perfect for bonding. It can be hard and it's good to talk about it. Don't make it shameful or taboo."