Greenhithe residents rushed to a Covid-19 pop-up testing station at Wainoni Park in response to a positive Covid case in the North Shore suburb. Photo: NZ Herald
An Auckland pub where a Covid-infected man spent more than three hours last week has closed for 14 days.

In a post on Facebook, The Malt pub in the suburb of  Greenhithe said today:  "The Ministry Of Health have asked us to close for 14 days from last night - reopening with a bang on Thursday 5th November! Your continued support is most appreciated."

About 200 Greenhithe residents had been tested for Covid-19 at a pop-up station in the North Shore suburb by early this afternoon.

Residents in the country's latest Covid-19 hotspot are reverting to social distancing and wearing masks amid heightened fears of getting infected in the West Auckland community.

The station was set up in response to the positive case at the popular local pub on Friday, October 16.

The Malt was forced to shut its doors last night and health authorities urged staff and patrons to have a Covid test as soon as possible.

The man. who did not know he was infectious, also went to an Auckland marine supply store at the weekend. But staff and fellow shoppers are not considered to be close contacts.

The man visited the Burnsco Gulf Harbour store twice on Sunday: about 10.30am and at 3.30pm, a company spokeswoman said.

"We were advised that the person had no symptoms at the time, their visits were brief and there was no interaction with any other customers and their interactions with the staff were very limited," she said. "No person who was in the store at the time or has visited since is considered at risk nor deemed to be a close contact."

Burnsco management chose to close the store early on Wednesday for a deep clean, in addition to the daily Covid-19 hygiene and housekeeping precautions and protocols staff followed, she said. The Gulf Harbour store reopened this morning and staff have been told to keep an eye out for symptoms of the virus. 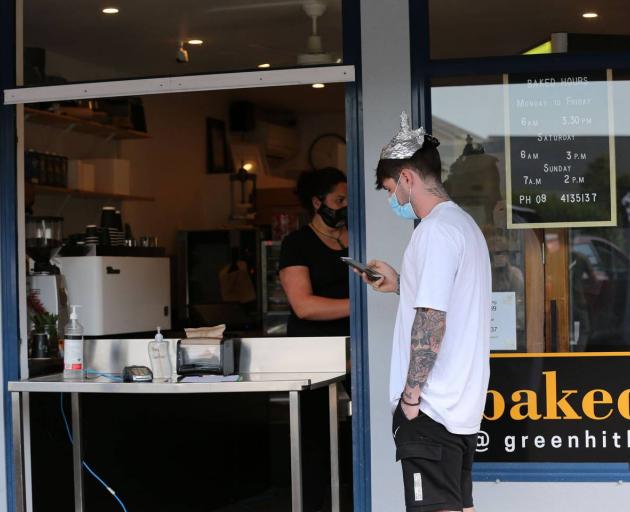 Longtime residents Don Haddon and Barbara Tulloch said the case was concerning, but they were erring on the side of caution.

"It's a small neighbourhood and the pub is quite a gathering place," said Tulloch, who said the couple had been in contact with a contractor who was at the pub on Friday night.

The bakery shop next to The Malt where the port worker enjoyed a night out drinking unaware he was harbouring the contagious virus was today serving customers from a distance in a scene reminiscent of level 3 Auckland.

Baked@Greenhithe's Mere Valentine said the bakery was not allowing customers in, instead placing a temporary counter at the front door and taking phone and text orders.

"It's just a precaution for the next couple of days. No customers in the store maybe for today and tomorrow."

After learning about the community transmission last night the bakery's owner had decided to change for the benefit of the workers and the community.

Although fewer customers were out and about this morning, many had returned voluntarily to using personal protection in public.

"Some are wearing masks," she said.

The Barbers Chair, which is in the same block of shops, said it was also taking extra personal protection measures for the next few days.

He said people made a beeline for the haircutting business, having learned from previous shifts up the levels.

"There was a busy rush first thing this morning. I think people just wanted to get in, in case there was a lockdown," said the barber.

A staff member at the Greenhithe Village Store said locals had appeared to have stepped up their own personal health protection measures.

"More people are proactively staying clear of each other today, standing two metres apart and putting their masks on," he said.

Local schools were also on edge with parents being told to keep their children at home if they had flu-like symptoms or had come in contact with anyone at the tavern on Friday night.

Greenhithe School - a two-minute drive from the pub - issued a notice on its website early this morning, saying it had been in touch with the Ministry of Education.

Hobsonville Point Primary School told parents that if anyone in their household was at The Malt on Friday, or had been in touch with anyone who had been, they needed to let the school know.

Greenhithe principal Stephen Grady said: "As a school, we always take the care and health of our children very seriously.

"If your child is sick or showing any signs of the symptoms of Covid-19 (runny nose, cough, loss of smell etc), please keep your child at home and seek medical advice."