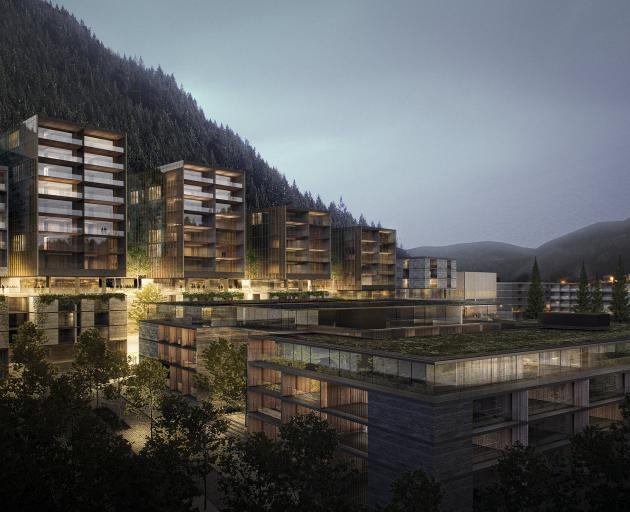 A graphic render of the Lakeview-Taumata precinct overlooking central Queenstown. IMAGE: SUPPLIED
Construction of the first buildings in a billion-dollar Queenstown development should start in 2023.

The first two stages of the Queenstown Lakeview project, which is being developed by a transtasman consortium, will consist of five residential buildings of between nine and 13 storeys.

A media statement from Melbourne developer Ninety Four Feet yesterday said the buildings would contain 370 units, including about 140 "co-living units".

The first release of units was planned for next year, and the buildings were expected to be completed in 2025.

Now called "Lakeview-Taumata", the development is a mixture of residential, hospitality and retail space on a 10-hectare site near the Skyline gondola that overlooks central Queenstown and Lake Wakatipu.

It signed a developer agreement with the Queenstown Lakes District Council just over two years ago and council contractors began subdivision and civil works in July last year.

It is expected to take between 10 and 15 years to transform 3.3ha of the land into more than 500 residential apartments, three hotels, and retail and hospitality space.

Courtyards, lanes, plazas, streets and other community spaces will take up about another hectare, while the rest of the site will remain reserve land occupied by public parks and an already-downsized Queenstown Lakeview Holiday Park.

The first two stages were referred by Minister for the Environment David Parker to a consenting panel last Friday for a fast-track process overseen by the Environmental Protection Authority (EPA).

The council expects to incur more than $50million in site preparation costs, including an unexpected, multimillion-dollar bill for removing asbestos contamination.

Queenstown Lakes Mayor Jim Boult has said ratepayers would gain $77million from the deal, as well as up to 50% of the development’s profit when it was completed.

A report by Insight Economics estimated a one-off GDP boost of $930million and the creation of nearly 600 jobs during the project’s construction period, Mr Burnaby said.