0 Comments
Tissues were needed during the final tour of the former Cadbury chocolate factory yesterday.

It was an emotional farewell for the 20 former staff and members of the public who went through the Dunedin building one last time before it is demolished.

The smell of chocolate and pieces of chocolate-making machinery remained, prompting former staff to share fond memories throughout the tour.

Up to 350 people went through the building on the back-to-back tours, which were sold out in a day.

Megan Fairley, who worked at the factory for 17 years, organised the tours after getting permission from the Government and construction companies who are involved in the demolition of the building. 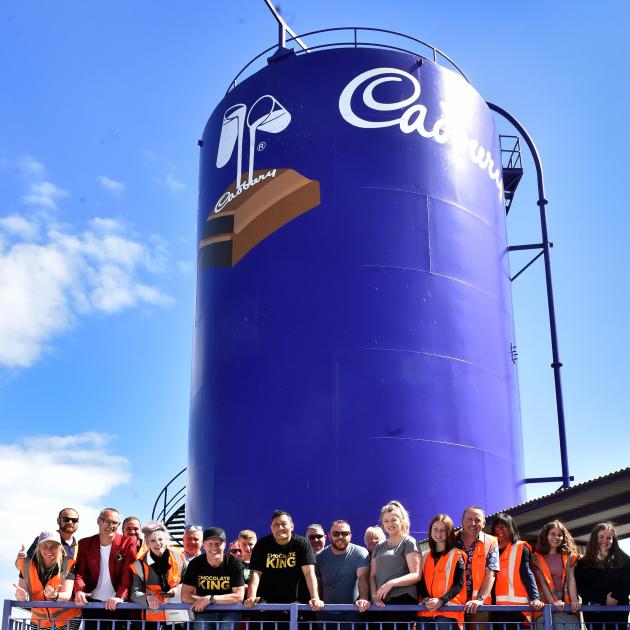 Those on the last tour through the former Cadbury factory stand next to the Cadbury silo. PHOTO: PETER MCINTOSH
She said the final tour yesterday was emotional.

"It’s closure for us. Being made redundant wasn’t easy but we’re here to celebrate the building and our memories of it."

She said she was grateful to those behind the new Dunedin hospital and demolition contractors for making the tours possible.

The tours included a visit to the old cafeteria, the silo platform, the chocolate-making areas, refinery rolls and the former changing rooms.

"We definitely saw some quite quirky things on the tour. They wouldn’t have been included in normal tours."

She said the tours had brought back memories.

"There was an amazing work culture in this place ... when you connect with the other [former staff] and talk about the cool stuff that has happened it spurs those memories."

Ms Fairley said it was important to raise awareness about how redundancy affected mental health. The tours had raised more than $4600 for Life Matters Suicide Prevention Trust and I Am Hope, a charity started by mental health advocate Mike King.