Police talk to motorists after a fatal accident in Hawke's Bay. Photo: NZME
It's been a horror three days on our roads with 11 people dying, including three members of a visiting Malaysian family in Kaikoura and a child who was hit by a car in Waikato this afternoon.

Waikato police said they were still investigating the cause of the child's death but confirmed it involved a vehicle on a Hams Rd property in Ohaupo just before 3pm.

Given it happened on private property it won't be included in the official road toll, which has grown over the weekend following 10 deaths in seven separate accidents.

Five people died after a crashes in Kaikoura and Hastings. Another five were killed in Morrinsville, South Auckland, Whakatane and Rotorua.

The most recent was a motorcyclist in Reporoa this afternoon.

HASTINGS:
About 5.50am on Friday there was a crash between a motorcycle and a logging truck on State Highway 5 at Te Pohue.

One person died at the scene but a second person succumbed to their injuries on Saturday evening.

Hastings Police want to hear from anyone who was driving in the area between 5.30am and 6am on Saturday, especially anyone who saw the motorcycle.

WAIKATO:
Two people died in a car after it was struck by a train at the intersection of Piako Rd and State Highway 26 at 4.10am Saturday.

KAIKOURA:
The three who died in Kaikoura are believed to be tourists from Malaysia travelling to one of the mosques involved in the Christchurch shooting where 51 people were shot dead in March.

Their vehicle and a truck collided on State Highway 1 about 3.15pm on Friday, closing the road for several hours. Two children were also critically injured.

Malaysia's New Straits Times has reported a family medicine specialist and her husband were among the family members who died.

It's understood they couple were travelling with their three children, one of whom also died.

Relatives of the family have arrived in New Zealand today and it's understood they want their loved ones to be buried in Christchurch as soon as possible, as per their religion.

A brother of one of the victims said the family had flown to New Zealand on December 2.

Kiwi Concrete director Jonny Francis said the truck involved in the crash was a road metal truck from its Kaikōura branch.

SOUTH AUCKLAND:
A pedestrian was fatally struck by a train in South Auckland on Saturday. The crash happened on Hospital Road, Mangere about 12.30am.

WHAKATANE:
A person died on Wainui Rd near Whakatane at 5.15am Sunday after their vehicle rolled.

REPOROA:
A motorcyclist died on Broadlands Rd, Reporoa, near Rotorua, after a crash about 1.30pm today.

Police said traffic was being diverted and motorists are advised to avoid the area if possible.

OHAUPO:
A child was killed after being hit by a car just before 3pm in a driveway on Hams Rd. 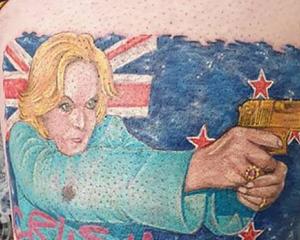