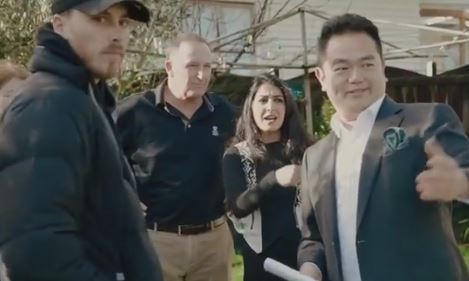 John Key paid $250k over the CV valuation for a house for his son Max at a recent Ray White auction. Photo: Blank Canvas Productions, Ray White
Sir John Key stood alongside son Max, giving him a generous helping hand as he snapped up his first home at auction, taking his first step on the lucrative property ladder in a million-dollar-plus deal.

Max Key is the proud new owner of a $1.4 million Mt Albert house, bought with the support of the Bank of Mum and Dad.

Sold at auction earlier this month, the property went for 22 per cent above CV, leaving the vendors in tears of happiness.

Sir John Key and his wife Lady Bronagh attended the auction to support their son, as did the 25-year-old's girlfriend. 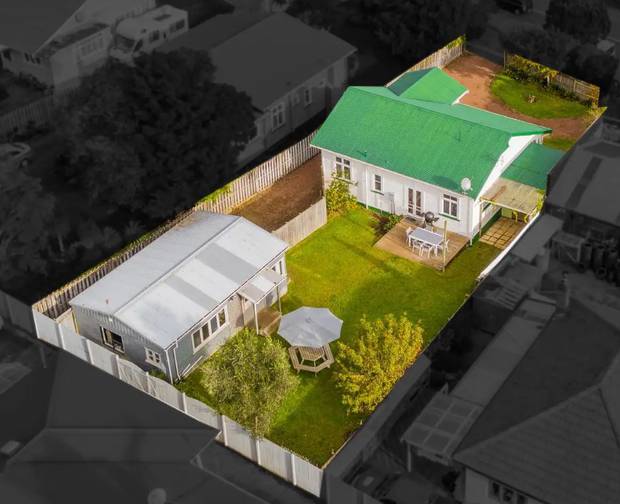 The Mt Albert villa. Image: Blank Canvas Productions
John and Max stood in the rain in the backyard for the auction process, seeing off seven other registered bidders.

The Ray White listing said the home had three double bedrooms, a trendy bathroom and a well-lit formal sitting room.

"The upscaled kitchen is a marriage of convenience and style with black and white contrasting cabinetry, entertainer's gas hob and pretty above-bench window," the listing advertisement said.

"A sunny and light dining area is a pleasant space for family gatherings and French doors lead to a private deck area and the established gardens and lawns beyond."

She told the Herald it had proved to be a very popular home while on the market. 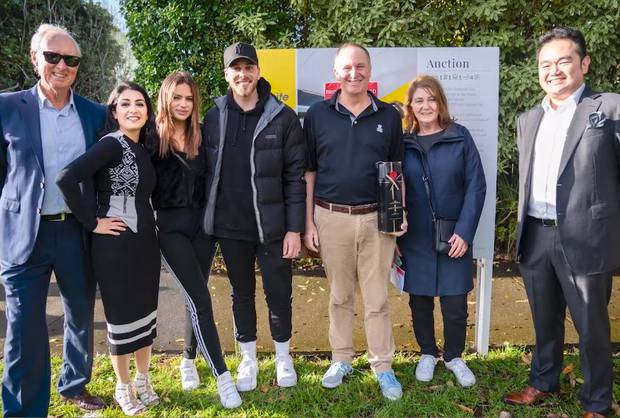 It's been a busy few years for the Keys buying and selling homes both here and Australia.

The New Zealand Herald looks at other residential property deals the former prime minister has been involved.

Following Sir John Key's shock resignation as Prime Minister in 2016, he and Lady Bronagh put their Auckland mansion on St Stephen's Ave on the market, saying it was time to downsize.

The spacious six-bedroom residence is spread across three original sections in the leafy inner-city suburb and has featured in scores of social media posts by son Max.

It was sold in a two-year settlement for $23.5 million to Lianzhong Chen.

At the time, the tennis court did not figure in the deal, being kept aside for the Key's own future development plans.

In 2017, those plans were lodged with Auckland Council, revealing a stunning three-storey architecturally designed new-build house on the tight 588sq m site. It included a swimming pool, subterranean garage complete with underground vehicle turntable and a lift. 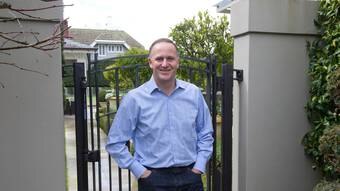 Photo: NZ Herald
At the same time, the couple bought a harbourside apartment off the plans across the ditch in the upmarket Mcmahons Point on Sydney's North Shore.

Seen as a useful bolthole for doing business in Australia, the property was not ready to shift into until April this year.

But by this time the need for the plush unit had changed, and on the day the Keys took possession of their new-build it was listed for sale for between $6.5-$7m.

Key told the Herald that things had changed since they bought it a year after leaving office.

"We bought it off the plan three years ago but have decided that we don't need a residence in Sydney as more of my work is oriented to other parts of the world," he said.

"It's a beautiful apartment but we only have so much spare time, and having built a new house in New Zealand we are keen to spend time in this property."

In the meantime, the Keys sold another one of their properties, a holiday home in Omaha, in 2018, to ANZ former chief executive David Hisco for $3.1m.

Hisco's property transactions came under the spotlight in the wake of his departure from the bank amid an expenses scandal involving wine and the use of chauffeurs.

The Financial Markets Authority determined that ANZ Group's sale of an Auckland property to Hisco's wife should have been disclosed as a related-party transaction in its 2017 financial statements.

At the time Key, who was ANZ's local chairman, said he and wife Bronagh decided to sell the property because they had not used it much in recent years. They had owned the property for about 25 years.

The modern beachfront house north of Auckland was sold privately to the departing chief executive but was not part of the investigations which resulted in Hisco leaving his job.

An FMA spokesman told the Herald the sale of the Omaha house wasn't a related party transaction which is defined as a transfer of resources, services or obligations between a reporting entity such as the ANZ and its related party.