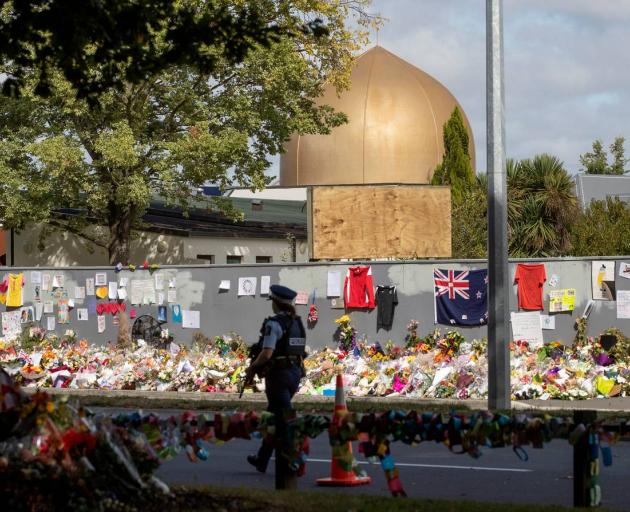 Flowers at the gate of the Al Noor Mosque in Christchurch after the 2019 terror attack. Photo: Files
The man convicted of the Christchurch mosque shootings has held off from initiating a judicial review of his prison conditions, and designation as a terrorist entity.

He was due to represent himself in a fresh legal challenge at the High Court in Auckland this morning.

It has been postponed with no next call date yet.

Any judicial review will not relate to his murder, attempted murder or terrorism convictions, or his prison sentence.

RNZ understand the mass murderer wanted to initiate a judicial review of the conditions he is being held in and to question his classification as a terrorist.

Brenton Tarrant was due to appear via a telephone conference call at the High Court in Auckland before Justice Venning.

He is serving life imprisonment with no possibility of parole and is being held in solitary confinement within Auckland's maximum security prison.

Human rights lawyer Dr Tony Ellis said any challenge of his prison conditions would come down to a clash of rights.

Corrections would be able to argue that his segregation was for his own safety, Ellis said.

"That is presumably being based on the fact that he's likely to be in danger if he mixes with other prisoners.

"In simple terms, he might get killed or severely beaten up. So the prison segregate him for his own good."

Ellis said because he would spend years alone this could be considered mistreatment under the Mandela Rules.

"But on the other side of the coin is the right to life and his life.

"If the Department of Corrections don't keep him in the way that they will argue they are keeping him his life might be at threat.

"So the right to life is a much more important right, generally speaking than any other right."

Rosemary Omar, who lost her son Tariq Omar in the Christchurch shooting, said maybe it was time for the attacker to be put in the general prison population.

"You know, in some ways that could be seen as him getting special treatment to keep him safe ... having his own room and what have you."

Omar said the news of his new legal challenge was especially hard to hear yesterday, the first day of Ramadan.

She said the hurtful timing was probably part of the cat and mouse games he liked to play.

Hamimah Ahmat's husband was the 51st person to die after the attack.

She said it crossed her mind that maybe the date was intentional, but any effort to upset her did not work.

"I think for a lot of us, our focus is just simply on Ramadan and being able to strengthen our practice, our faith, our spirituality, you know, we're not going to let this distract us."

Ellis said it was up to the court to decide when the case would be heard but there could have been better awareness about the clash with Ramadan.

"I imagine nobody gave it a great deal of thought. If you're like me, you look at your calendar, it has Anzac Day on it. It doesn't have the first day Ramadan on it.

"I don't think there's any malfeasance meant in this, it's just unfortunate coincidence."

Ramadan runs until 12 May.

The Department of Corrections said it continued to manage the prisoner in accordance with the Act.

It has refused to provide any further details about his life-long incarceration.