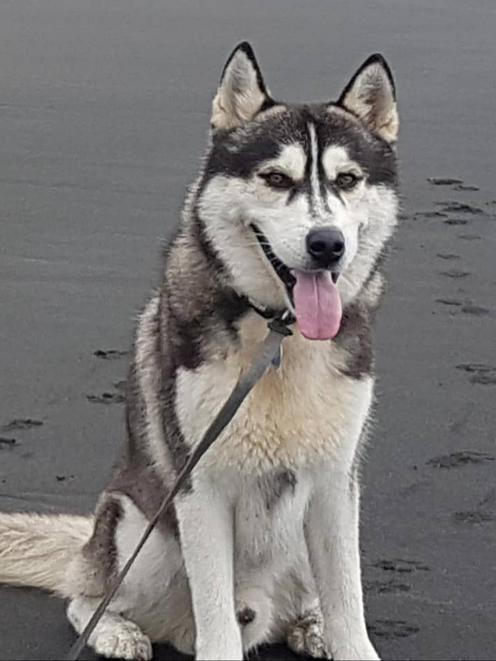 Johnston says Aspen is a gentle dog that doesn't deserve the label of "menacing". Photo / Supplied
An Auckland woman is pleading for her dog's life after she says he "chased a guinea pig that died of fright", but the guinea pig owner is disputing her claims and says she has failed to take responsibility for her pet.

Alexandra Johnston's husky Aspen has been labelled a "menacing" dog by Auckland Council and Johnston is fighting the decision, which could see the dog being destroyed.

Johnston took to Facebook to share her story, saying her pet had a "gorgeous heart" and alleging that the decision to prosecute was "an eye for an eye".

"I honestly can't believe this is happening over a guinea pig," she wrote.

"Where is the logic?

"There's nothing malicious in him but the instinct and fun of chasing something has put his life on the line."

Johnston told the Herald that the family bought Aspen three years ago when the then nine-month-old Husky was being rehomed.

Her son bought the dog with money he had saved up but Johnston said that she quickly became the "primary carer and trainer".

She said it has been "a journey" training the dog, who had very little socialisation when he entered their lives.

Johnston told the Herald that Aspen had run into trouble last August when he ran away during an outing to Waiake Beach.

Darting towards a nearby house, she said Aspen soon located some chickens which were not contained on the property.

She said: "I don't think he killed one. I only saw half a dozen feathers and the owners would not let me go and find the body."

Johnston said she worked hard to keep Aspen away from the chickens after that, but in May this year he found his way back.

On May 23, Aspen once again got away, this time from Johnston's husband.

"He got one chicken, the second chicken died in the owner's arms".

As her husband spoke with the owner of the chickens, Aspen then headed over to the neighbour's property where a group of guinea pigs had been placed outside in a makeshift enclosure.

Describing the circumstances as a "perfect storm", Johnston said that Aspen then jumped into the enclosure and chased them around.

She said that when her husband arrived at the scene, the guinea pig was being held by one of its owners and was still alive.

"There was no blood, there were no wounds and the guinea pig was still alive".

Johnston disputed that her dog had bitten the animal, saying Aspen had a "very soft mouth".

The owner of the guinea pigs told the Herald that he disputed Johnston's account.

He said that when his wife got to the dog, it had the guinea pig in its mouth.

Council documents supplied to the Herald state that at the time the smaller animal was "going limp and cold".

He said his children were "really upset" by the incident and they saw their pet after it had been removed from Aspen's mouth by his wife.

The much-loved guinea pig, Bert, is survived by his companion, Ernie.

He also told the Herald that the animal control officer who attended the incident was familiar with Aspen.

Johnston took issue with the council's decision to label Aspen as "menacing", saying there was no grey area and the council should take a wider view of the dog's behaviour and "get to know" the dog.

"You have to ask yourself, is this worth putting us through this drama and tying up the court? I have to plead not guilty because it's the only way that I can fight for the life of the dog".

"I don't think that, just because he has chased a chicken and a guinea pig, he is automatically a menacing dog."

Johnston said that society accepts that cats kill smaller animals and native birds but doesn't accept that "dogs still have an instinct to chase things".

"Where is it right that cats can go and do anything and a dog follows its natural instinct and this is where we land up?"

She told the Herald that she had formed a strong bond with Aspen and the threat of his destruction was taking a heavy emotional toll.

The guinea pig owner stressed that the family didn't want to see Aspen destroyed and that decision rested with the council.

"I understand it from the council's point of view. What if this dog attacks a child or something?"

He said that he wouldn't want Aspen near young children and said the animal had already had "so many chances".

He claimed that Aspen's owners "don't seem to take any responsibility" for their dog's actions and said: "I'm sure that they love their dog but I don't think that they're really capable of looking after it."

Johnston disputed that Aspen posed any risk to children, saying that he was gentle and patient with children, who she allowed to approach and pat him.

Johnston also said that a companion dog's life was worth more than a guinea pig's.

Bert's owner agreed with Johnston on the point but said that his children, who were 6 and 7 at the time, loved their pet guinea pigs and it wasn't "an eye for an eye type thing".

An Auckland Council spokesperson told the Herald that they were limited in what they could say as the case is before the court, but said animal management staff take a graduated response and work to educate owners before harsher measures are used, adding that they only take more serious action as a last resort.

"We work with dog owners and can offer advice and help, but we also need to be fair to all animals owners, and make sure Auckland is a safe place for everyone," they said.