Prime Minister Jacinda Ardern says the gathering limit will increase to 100 people from noon this Friday and Cabinet will consider a move to Level 1 no later than June 22.

This afternoon's announcement means churches can resume services and the 50-person limit on funerals and tangi would be lifted. However, hospitality venues will still need to allow for physical distancing, so no dance floors.

"It's about risk mitigation," Ardern said at a media briefing, and while New Zealand was in a good place, Covid-19 was still showing up in people four weeks later.

She said the decision was able to made because there was no evidence the relaxing of rules had led to an increased number of cases, as had been the case overseas.

The easing of restrictions would be good for community sport and was only able to happen because the country had successfully gone "hard and early".

Church services, weddings and funerals will all be able to have 100 people. "Many more gatherings will be able to occur. These changes are good news for business."

"We have already opened our bars. Across the ditch, that isn't even on the horizon ... we are moving faster than many."

People planning a Friday night party should keep a list of who was invited.

Today's announcement was an intention to give people notice of the change, but she was also mindful of religious communities that normally congregate on Fridays.

Move to level 1 could come in June

Ardern said moving to level 1 should be done as quickly as safely possible.

Director-General of Health Dr Ashley Bloomfield said the advice to allow gatherings up to 100 people was based on how well the country had been doing battling Covid-19.

Bloomfield said allowing 100-person gatherings was because of the "very low" level of new Covid-19 cases.

"We felt not only should we move to 100, but we should spend two two-week periods at the full alert level 2, and then actively consider moving to alert level 1."

Ardern said that there were no more new Covid-19 cases due to stepping down to level 3, which was "very good news".

That had bucked the trend in other countries, some of which had experienced a second wave of cases.

There were no new cases of Covid-19 overnight, and with no new recoveries, the number of active cases remains at 27.

Alert level 2 has been in place for 12 days, and it usually takes about 10 days for changes in alert level behaviour to be reflected in the number of new Covid-19 cases.

Bars opened for the first time under level 2 on Thursday, so any potential spread that might have happened in a crowded bar might not show up in testing data until the end of this week.

Ardern has previously said that social gatherings at bars have been the trigger for some of the country's significant clusters, which was why re-opening them under level 2 was phased in.

It was also a reason that she decided to put a temporary 10-person restriction on indoor and outdoor gatherings under level 2, even though she had previously set the limit at 100 people.

The 10-person limit was changed to 50 people for funerals and tangi following public outrage.

Up to the Aussies

Asked whether the mooted trans-Tasman travel bubble would be able to occur if some Australian states kept their borders closed to other states of the commonwealth, Ardern said that was a matter for the Australian federal government.

"It's for Australia to signal when it's ready - it may choose to open up while it still has some internal border restrictions," she said.

Ardern said New Zealand was "in a good place" in its strategy to eliminate the Covid-19 virus - meaning the coronvirus might re-emerge occasionally but in such an isolated way that it could be stamped out.

However, it continued to surge in other countries and there was evidence of spikes in countries that had begun reducing their lockdown restrictions.

The Prime Minister did not offer an opinion on National's new front bench, but she wished them well because a change in leadership was always a challenge.

"They're not the party of Key and English now. They are wishing to rebuild and I wish them all the best."

Ardern said there were no plans for Labour to campaign just for the party vote in the Northland electorate, where NZ First MP Shane Jones will stand.

"It's not something we've done before," she said. 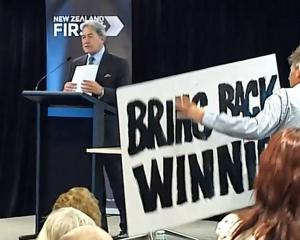