PM: Stay at home and save lives

The Prime Minister has reminded Kiwis about the importance of staying at home as the nation goes into lockdown saying: "Act like you have Covid-19. Breaking the rules could kill someone close to you."

Jacinda Ardern made the comments at her final news conference this afternoon before a nationwide lockdown to help Covid-19 begins at midnight tonight.

Ardern had one simple message for Kiwis - "Stay at home"

"Act like you have Covid-19. Breaking the rules could kill someone close to you."

Ardern said it was now a matter of hours from the nationwide lockdown and Covid-19, left unchecked, would have an unacceptable toll.

All non-essential services will be shut down for four weeks and everyone is being asked to stay home and limit close contact as the country tries to stop the spread of coronavirus.

Failure to stick to the rules and stay home could risk the lives of tens of thousands of people, Ardern has said, and would see the lockdown period extended beyond four weeks.

There are 50 new confirmed or probable cases in the last 24 hours, bringing the total to 205 today.

Ardern announced today that "every New Zealander coming through our border will be screened."

Those displaying symptoms of Covid-19 will be tested and put in isolation in an approved facility. The same goes for those who have nowhere to self-isolate or no ability to get home while maintaining isolation.

The new quarantine requirements at the border will kick in from 2am, and Ardern said the government would cover the cost of that accommodation - whether it be at motels or the Whangaparaoa military base.

Eight people who flew in to Auckland Airport yesterday had tested positive for Covid-19, and Ardern has said she was looking at quarantining people arriving into the country.

Ardern said as lockdown took hold, police will move around the country and ask questions of people outside of their homes. They will ask people about their activities.

People without a valid reason to be outside can be reminded of their obligations, she said.

People just getting fresh air should be able to without being told to go home by police, and some common sense was needed in their approach.

The prospect of police and the military on New Zealand streets might be daunting, but Ardern said they were there to help, and their first approach would be about asking questions and reminding people of their self-isolation requirements.

"People shouldn't be afraid of that."

Police will be the primary source of support for the community, and they had good numbers with stations nationwide. 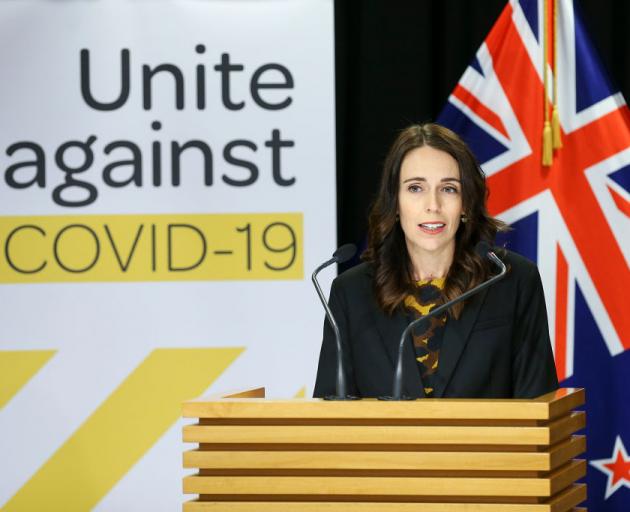 Jacinda Ardern says people in lockdown should stick to their "bubbles" which, for most people, are those in their households. Photo: Getty Images

'YOU ARE NOT ALONE'

The Prime Minister said though people may not be working, but they had a job - and that was to stay at home.

"I know how hard this will be, especially for New Zealanders who face the first day unemployed and with an uncertain future."

Ardern pointed to the measures the Government has made to save jobs and businesses, and to help home owners and renters.

"It won't be easy, but the alternative is worse. You are not alone. You will hear us and see us daily as we guide New Zealanders through this period."

She stressed the need for people to limit close contact with others.

"Every interaction we have with someone else increases the risk of spreading the virus. Stay at home. That is the simplest way to save lives."

People in lockdown should stick to their "bubbles" which, for most people, are those in their households.

Couples who don't live together or parents with shared custody could be in the same bubble, as could the "buddy" of a person living alone - but bubbles shouldn't overlap.

"You can't spend time with other people outside of your bubble."

Ardern said success will not be instant, and what we do today won't see benefits for days to come. The number of cases will continue to rise, and modelling suggested that the number of cases could reach the thousands before dropping.

The alert level could be dropped again if the number of cases declined - though that would take some time, she said. The nature of cases was also important, including how widespread community transmission is.

This now meant the Government had all the enforcement powers it needed to fight the spread of Covid-19.

Parliament would also pass an urgent bill that changed various pieces of legislation, including freezing all rent increases and empowers the Education Secretary to open and close schools as necessary.

Border enforcement would step up, Ardern said, so that New Zealanders returning home from overseas will be screened.

"Asymptomatic people without the means to self-isolate will also be put in an approved facility.

"They will be checked on by police in the days that follow, and they will be fined and quarantined if they are not follow instructions to self-isolate.

"These are the measures we must take."

While in force, the state of emergency will allow Civil Defence Emergency Management controllers to provide for the:

• conservation and supply of food, fuel and other essential supplies.

• evacuate any premises, including any public place.

• if necessary, exclude people or vehicles from any premises or place.

Stuart-Black said she hoped those powers were not necessary, but there would be zero-tolerance for people flouting the rules of self-isolation and police could bring in the military, if necessary.